Barbie gets a tattoo makeover

Barbie's inked-up and rocking a pink bob. Is this the 53-year-old's midlife crisis? Either way, it's a step forward 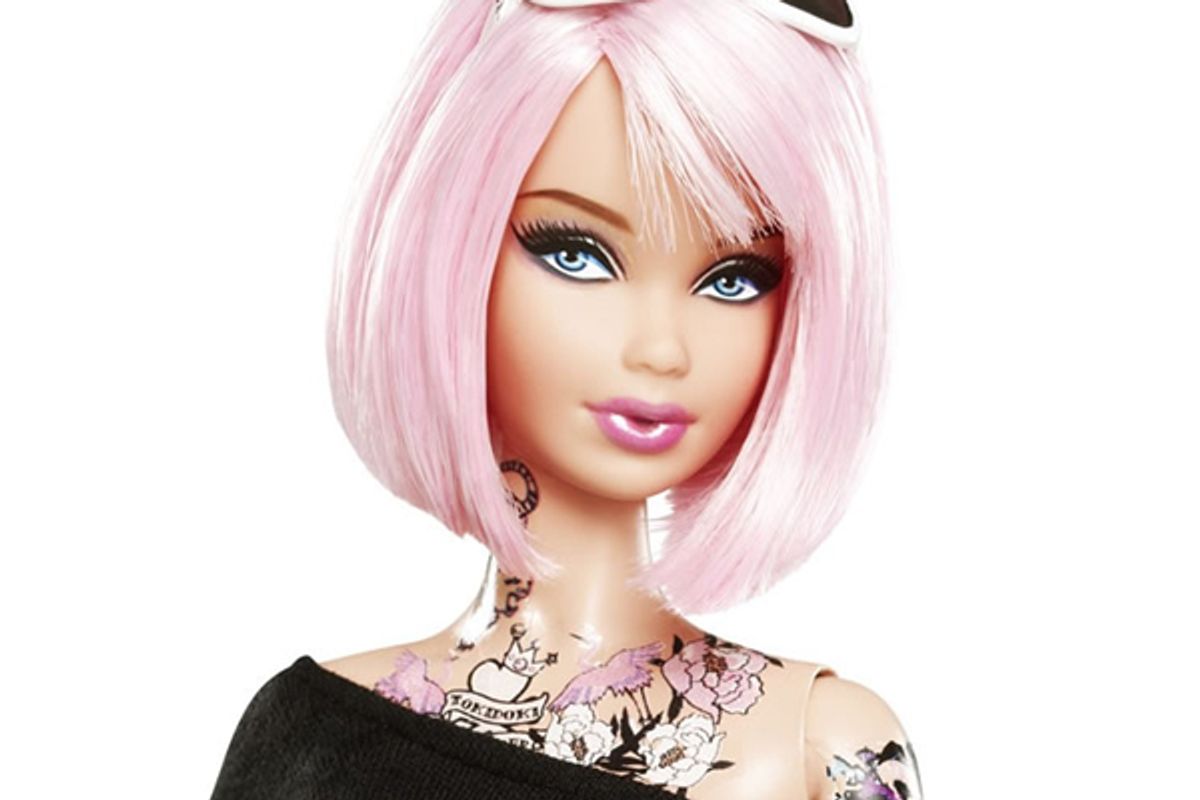 The world is full of middle-aged women eager to youthfully reinvent themselves. And towering above the Real Housewives, standing tippy-toe taller than even Madonna, there is, always, Barbie. But though the blond icon has been a cashier, a model, a United States president and a cyborg-like half-human, half video camera, is the world ready for America's sweetheart to be a tattooed bad-ass?

In a partnership that could only evolve from teaming up with an Italian-created, Japanese-inspired and Los Angeles-based company, Mattel has partnered with the cult brand Tokidoki to create a limited-edition Barbie with a Harajuku twist. This "cutting edge" Barbie rocks a pink bob, a slouchy crossbones top -- and a swath of retro-themed ink that climbs across her shoulders and up her neck. She's so popular that she's on back order till the end of the month. Jesse James, we've found your next girlfriend.

Unsurprisingly, not everyone is thrilled with the plastic beauty's new incarnation. As a poster on the tween-oriented Ms. Twixt said, "If I was a mother I wouldn't buy one for my daughter. This seems to be sending out the wrong message." And a commenter at the Daily Mail wailed, "I hate that poor Barbie has been sucked into this terribly ugly fad."

But Barbie's never just been the darling of the preteen set. From the day she moved into her first dream house, she's been irresistible to just about everybody. In a statement, Mattel acknowledged that the $50 tootsie "is a perfect example of a limited-edition doll sold through select retail locations" for "the adult doll collector."  And as a parent on Babble noted, "I think the pink hair and tattoos are fine. The objectionable things about Barbie are the tiny feet and gigantic fake boobs."

Besides, this isn't Barbie's first time under the needle. Back in the '90s, both Barbie and her life partner Ken went through a brief, ill-advised "Butterfly Art" tattoo phase. Oh, didn't we all, Barbie and Ken? And two years ago, Mattel unleashed Totally Stylin' Tattoos Barbie, who came complete with her own kit and array of designs, so kids could tramp stamp her -- and themselves -- to their heart's content with flowers and even Barbie's own silhouette. Because Barbie's such a big narcissist that she needs her own face on her body.

There's an obvious distinction between the innocent Totally Stylin' Barbie, with her penchant for rub-on rainbows and hearts, and the sophisticated, permanently inked Tokidoti. Their consumers are clearly different. But it's been a long, long time since looking a little unique was considered scandalously transgressive. The truth is that the sleek, pink-haired female with leopard leggings only needs a Starbucks in her hand to look like plenty of the moms you can see any day at the local playground. And that's a nice image for little girls to see there in their dolls. It reflects the contemporary reality of their experiences.  That's why, although she's clearly intended for her grown-up fans, Tokidoti will likely blend in just fine in a whole lot of little girls' toy boxes.

Sure, she's not exactly Sticking It to the Man Barbie, and yes, her physical proportions are still unachievable. But with her sassy getup, she is, in her own small, subversive way, announcing to the world that tan and blond are not the only barometer of beauty. That it's OK to bust out of the mold once in a while -- - even for the ultimate tan, blond and very cookie-cutter American girl. And that's a message that shouldn't be wasted just on adults.