In praise of the shadow economy 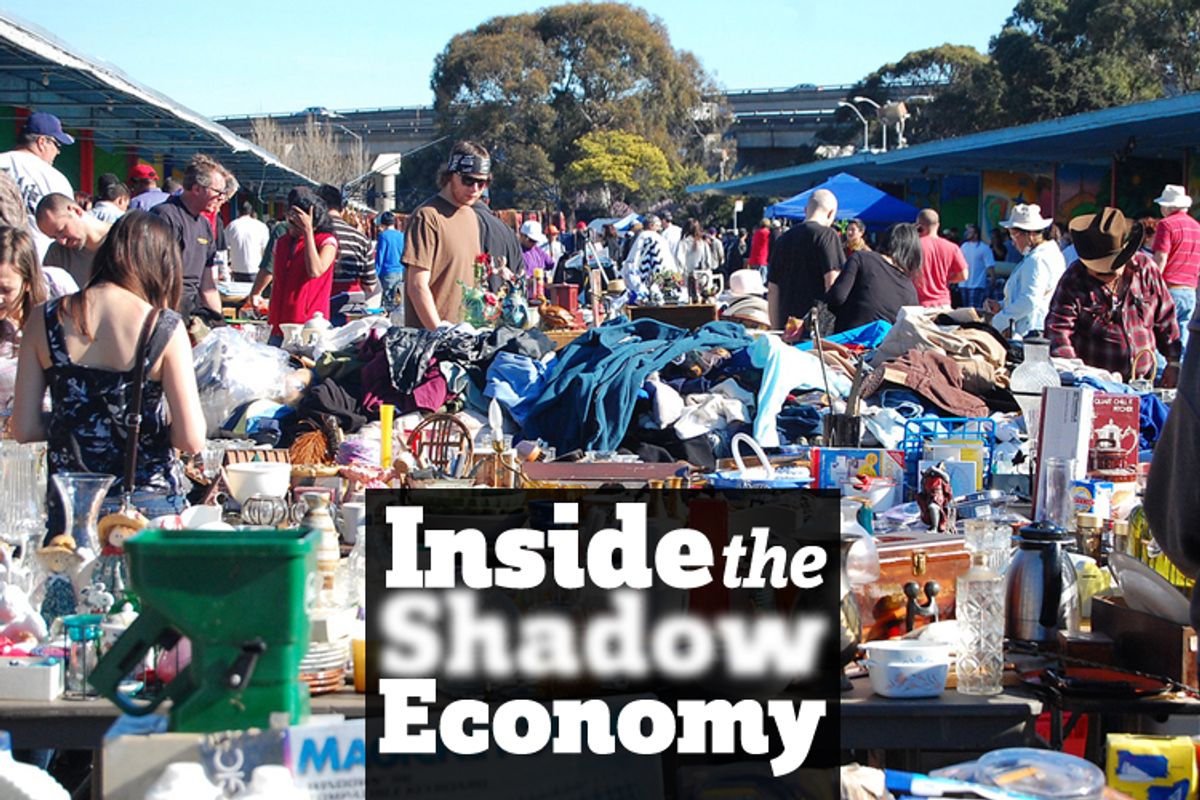 "Half the workers of the world," writes Robert Neuwirth in his new book "Stealth of Nations: The Global Rise of the Informal Economy," work in jobs that are "off the books ... neither registered nor regulated." The combined economic activity of these 1.8 billion workers adds up to $10 trillion. If the informal economy were squeezed into a single political structure, observes Neuwirth, it would be the second largest economy in the world.

For many economists, labor organizers, government leaders and law enforcement officers, those numbers represent a huge problem: a tragic panorama of exploited workers, criminal activity and crippling shortfalls in government revenue. But where others see darkness, Neuwirth -- reporting from China, Brazil, Nigeria and elsewhere -- witnesses something more promising. In a world of growing inequality and faltering "real" economic growth, the shadow economy is where job creation is actually happening. Calling upon the most meager of resources and without any government assistance, people are somehow finding a way to survive, and even prosper.

"Stealth of Nations" makes a provocative argument: Instead of demonizing the informal economy, we should embrace it. Left to their own devices, people are finding ways to create jobs for themselves. The informal economy may ignore borders, trample over intellectual property laws, and thrive on bribery and other rule-bending behavior. To a mainstream economist, it may represent a fundamentally inefficient way of organizing economic behavior. But to Neuwirth, the informal economy is something we've got to learn from, coexist with and possibly even nurture. Because the world needs all the avenues for upward mobility that can possibly be mustered. "Employment," he writes, "has more value than efficiency."

Neuwirth's new book serendipitously arrived at Salon just two weeks after we began the "Inside the Shadow Economy" series, and I immediately seized upon the chance to call the author and talk to him about his work.

The "shadow" or "informal" economy gets a lot of bad press. Your book pushes back on the negativity, to the point that you even eschew the terminology most people are using to describe the phenomenon -- gray, black, underground, shadow. Maybe a good place to start is with an explanation of why, throughout your book, you choose to call the informal economy by the name "System D"?

Sure. I pirated it from Francophone Africa and the Caribbean, where the French word "debrouillard" means a person who is self-reliant. To say a man or woman is a debrouillard is to say that they know how to survive all sorts of difficult and sticky situations. That has been modified to fit the post-colonial reality of the Caribbean and Africa so that what we call the informal economy or the shadow economy comes to be known as "l'economie de la debrouillardise" or "the economy of self-reliance." The short, street version is "System D." For me, that's a much less pejorative term, because self-reliance is something that is good -- we are not casting aspersions on it even through its name.

A lot of the academic literature on the informal economy suggests that its growth is a reaction against high taxes or regulation, but the people you profile in your book seem to exist in a world where those concerns are almost irrelevant; they're starting out so low on the economic totem pole that the notion of getting a license or paying taxes is inconceivable.

I don't think people are turning to the so-called economic shadows because of any fear of regulation. It's just not something that has even crossed their minds. Even here in the United State when I interviewed people who had businesses without licenses and registration, it wasn't that they were avoiding anything, it was just that there was no way to start a business in the way that the legal requirements would suggest.

In the developed world, most economists seem to treat the informal economy as a stage on the way to something else -- as a kind of transitional phenomenon. The U.S. went through its wild and woolly period in the 19th century, but now it has matured, so the expectation is that China will do the same, and maybe even, eventually, Nigeria. But at one point, you write that "the time for System D is now" and you seem to be referring to both the developed and the developing world. You even observe that there is some preliminary evidence that the countries with the most robust informal sectors recovered most quickly from the Great Recession. So should we be actively encouraging the informal economy?

In today's economic system it is definitely something to be encouraged. I think the age of large industrial powerhouse corporations that are going to provide the majority of jobs is winding down. That is not even the way that things happen all that much in the United States anymore, and certainly not in the developing world. It seems to be anecdotally true that where there is a robust System D in the developed world there is a better cushion for surviving the economic shocks in the formal economy.

So how can governments support the informal economy?

I think we have to come up with in-between strategies that allow for System D to exist. System D needs government, it needs stable currency exchange rates. Businesses need electrical grids and public utilities. But it works both ways: I would argue that governments also need System D, because it provides employment generation and is the incubator of business ideas. Maybe there can be a meeting in the middle; maybe there are ways to experiment with how to encourage the robustness of System D while also helping some of the larger System D firms to enter the formal economy.

But how do you do that and still ensure that government can keep operating? Isn't one of the problems with the informal economy the fact that it deprives governments of revenue while still leaving them on the hook for services?

Yeah, that's true, but remember, all that money that is earned sub rosa ends up getting spent in the economy in all sorts of ways, so it's not entirely true that there isn't any benefit to government from the continuation of System D. But beyond that I think that governments have to start figuring out how to privilege employment and job creation through System D. Those things are social goods. So the same way that a formal business might get certain tax advantages for adding employees, informal firms should be looked on with that same kind of eye: that they are adding jobs and keeping people employed, and maybe they can be legitimized in some way without being forced to pay the kinds of taxes that every other business would. I know that that is a controversial statement -- because it seems like it is unfair to the formal businesses. But I think we have to start looking at what an economy is for. What is a market system for? Is it is purely for corporate protectionism, something that favors the already existing businesses and shuts everyone else out, or are we looking at something that is a bit more egalitarian and fair? Something that privileges job creation and diversifying wealth and bringing sort of traditional disenfranchised communities into the market system. System D is very efficient at doing that and should be rewarded for that.

But isn't there going to be push-back on that? You spend a lot of your book in Nigeria, but I think to many Americans, the capital city, Lagos, is the very definition of third-world squalor. Why would we want to nurture that?

The post-colonial reality is really difficult. I'm certainty not arguing that there isn't squalor in Nigeria. But it is a tremendously entrepreneurial place and people are establishing businesses and making ends meet in ways that are necessary for the survival of the population -- all without the assistance of government. In some ways it is more entrepreneurial than the United States is.

You note several times in your book that the informal economy has always existed and predates the formal economy. But what seems really important now are the ways in which modern globalization fosters the informal economy -- and appears to be undermining the formal economy in the developed world. You write about a Spanish company, Zara, that outsources production of cut-price high fashion to a global network of informal textile workers. Isn't that just another step in the downfall of textile workers in the developed world? Labor has lost whatever bargaining power it once had, in large part because globalization allows anyone with capital to tap networks of workers who will work for rock-bottom wages.

Every attempt to change a business model has a downside. In the United States, the Northeast in particular used to have a huge textile industry, and then the firms all ditched Lowell, Massachusetts, and Lawrence, Massachusetts, and moved down to South Carolina where they had more flexible labor rules. So what's happening now globally is not all that different from what our own firms did.

I think there are ways in which System D is exploitative too and the more that we can find solutions for those forms of exploitation, the better. But you can't put the genie back in the bottle. It has just become so much easier to move things around the world -- the world is dizzy with goods moving from here to there and all over the place -- it's impossible to keep track. So yes, it's much harder for labor when the supply chains are global; that's absolutely true. But pragmatically speaking, supply chains are global.

I think that there are still tremendous opportunities in the System D trade networks that exist within global trade. If that can be scaled up it becomes a way for the developing world to skip the middle man. They won't need Sony or Nokia if they can do it themselves. Of course the downside of that, you might argue, is that it would be bad for Nokia or Sony. And I suppose that if System D producers get that strong, it would be. But it would also be good for their native countries. So then we have to look at globalization in terms of global equity.

Looking at the world, the question is: How do people survive? In researching my book, it just became obvious to me that outside of the U.S. and Western Europe, and certain Asian countries, it is the informal economy where people survive. And if the world is getting by on System D, then we can't keep on demonizing or disparaging it. Because for most people and particularly for most people struggling to get a foothold it's a necessity.

Even in the West, informal economies are growing. How do you see the future? Will the West regroup or will the future be increasingly informal?