The "Clerks" auteur has reinvented himself as an irresistible DIY comic Everydude. Too bad about his movies. 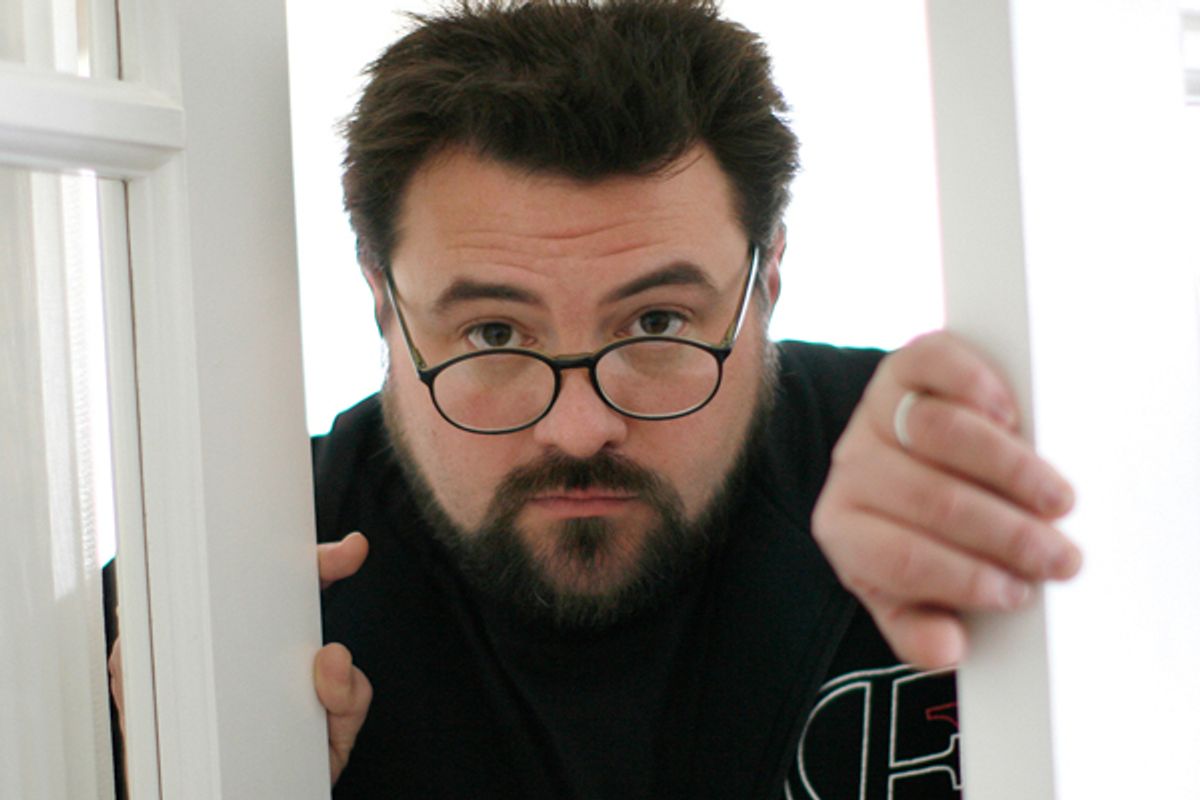 Never has the director of an 80-minute, straight-to-video B-grade action flick gotten quite the level of publicity that Kevin Smith has gotten for "Red State." This has very little to do with the movie, which reaches DVD and Blu-ray this week at the end of Smith's extensive self-distribution tour, and just isn't all that memorable. I finally caught up with "Red State" from the comfort of my living-room sofa and liked it better than I expected to. I suppose it must have once been intended to read as an allegory about American life, but instead it feels like a late-night oddity along the lines of Quentin Tarantino's "Death Proof," a basic-cable throwback that's simultaneously good and bad. It's a charming if conspicuously unfinished film, a half-riotous, half-idiotic send-up of the teen horror genre with a vaguely hip political twist.

But Kevin Smith has left the days when he was primarily known as the director of "Clerks" and "Chasing Amy" and other shambling indie comedies far behind. He's arguably way better at his other job, as a relentless self-promoter and Twitter humorist, a subculture brand name and signifier of working-class suburban authenticity, a bush-league hipster blend of Bruce Springsteen and Michael Moore. Consider the performance-art masterwork that was his premiere of "Red State" at Sundance last January. Smith somehow coaxed the anti-gay fundamentalists of Fred Phelps' odious Westboro Baptist Church -- who are lampooned in the film -- to show up in Utah to picket him. (Smith's subsequent encounters with the Phelps clan have had the flavor of a scripted pro-wrestling feud, or maybe even George Bernard Shaw's reputed practice of writing anonymous withering reviews of his own plays.) Then, having lured various distribution bigwigs to the Eccles Theatre with the promise that he'd auction off the rights to "Red State" onstage after the screening, he announced that he was buying the movie himself, for 20 bucks.

I have no idea whether self-distribution was a shrewd business move in the short term, although Smith has reportedly grossed almost $1 million with his one-night roadshow screenings of "Red State" in 15 cities or so. But as a long-term play, aimed at circumventing both the critics and the film industry and building his rep as a DIY populist entertainer, it was pure genius. In recent years, Smith has gotten trapped between the indie fringe and Hollywood, and he doesn't quite fit with either. He's gotten too old to present himself as the voice of post-punk suburban youth, and simply isn't distinctive or auteurish enough for the film-festival circuit or art-house audiences. As for his attempts to go mainstream -- did you see "Cop Out," Smith's '80s-style comedy with Bruce Willis and Tracy Morgan? I sincerely hope not. I've largely blacked it out, but it lingers in the back of my cortex, like a dyspeptic bad dream.

Nonetheless, he's one of those pop-culture figures who has developed a mysteriously large following, which at this point seems entirely independent from his movies. (Before "Red State" and "Cop Out," his other films of the last decade: "Zack and Miri Make a Porno," "Clerks II" and "Jersey Girl." You see my point.) On the other hand, maybe it's not so mysterious. Smith is a funny and likable commentator on current events, a social-media oversharer of intimate sexual details, a straight suburban dude who's a loyal friend and supporter of LGBT rights. He stands up for the little guy or -- in the case of infamously being declared "too fat to fly" by Southwest Airlines -- the really big guy.

More than anything, to be sure, it's Smith's example that inspires his fans. He came out of nowhere almost as much as any filmmaker ever has, making "Clerks" in the early '90s among the downscale strip malls of northern New Jersey, and through pure optimism and initiative and drive turned himself into a low-wattage celebrity and a highly successful cultural entrepreneur. He's devoted himself to the nearly impossible task of being famous and also being a regular person who behaves normally and is accessible both to fans and detractors. He engaged in public Twitter battles with journalists over his decision not to hold critics' screenings or offer press comps to his "Red State" tour, and again I think that was shrewd. He wouldn't have gotten good reviews in any case, and got to present himself as the rebel who was eluding the pointy-headed bicoastal intellectuals and going straight to the people. (For the record, I wasn't involved in any of that.)

It might make a cleaner wrap-up to this intriguing episode in Smith's career if "Red State" were either really good or really terrible. As things stand, this movie is a frustrating experience, which begins as a sharp and amusing comedy about three high-school dudes lured into a religious cult by the promise of four-way sex with Melissa Leo, and then degenerates into a lazy, chaotic Branch Davidian-style siege shoot-'em-up that even John Goodman can't save. Smith hasn't lost his ear for crisp, vulgar dialogue, and gets a terrific and highly convincing performance from Michael Parks as the Phelps-style cult leader, who certainly isn't sympathetic but seems recognizably human. As I've suggested, the movie is almost irrelevant to Smith's new career as preacher, comedian and synecdoche of regular-guy-ness. Maybe the truncated, chaotic quality of "Red State" is a deliberate artistic strategy, and maybe he really did run out of money and edit the movie on a computer at Staples (which is kind of what it looks like). But you've got to honor the guy's ingenuity; he wins either way.

"Red State" is now available on Blu-ray, DVD and other home-video sources.