Many adults these days are eager to postpone the challenge of parenthood. Alas, I'm not married to one of them 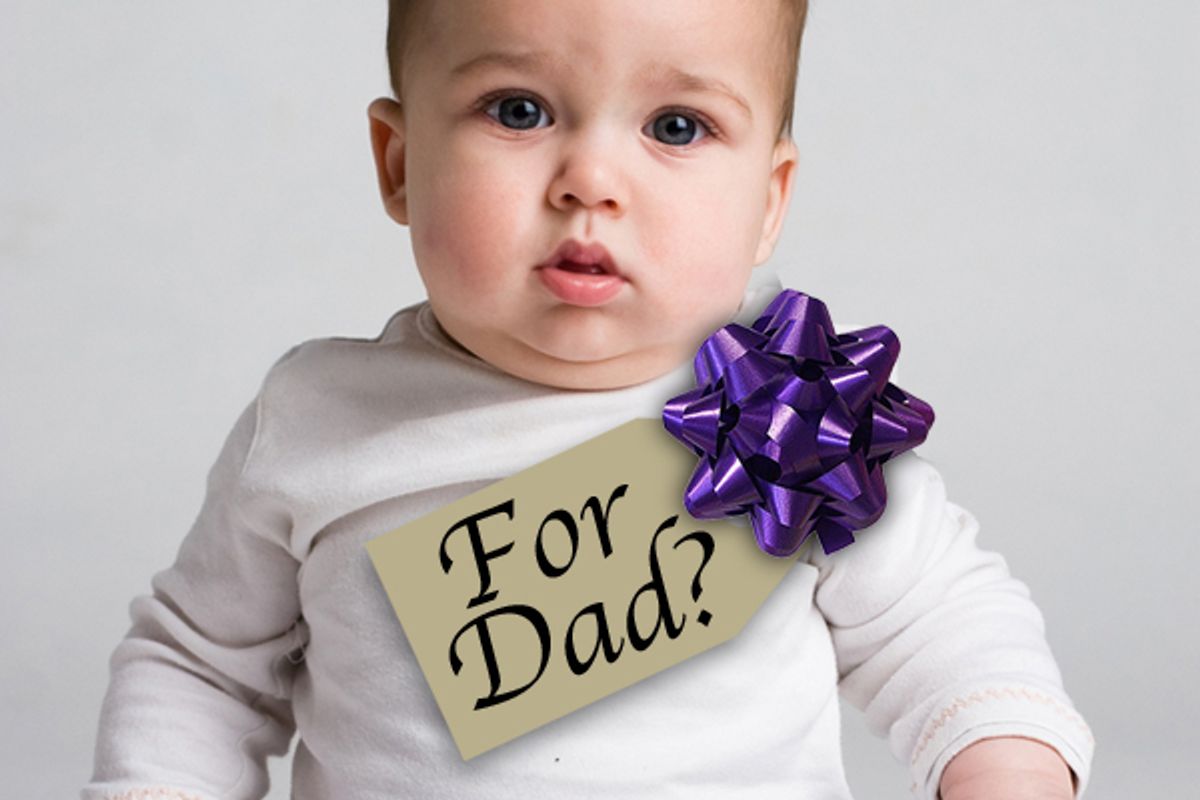 My husband and I sat in our living room unwrapping his birthday gifts. A bottle of Oban whisky. A green and black pair of vintage sneakers. Bose noise canceling headphones. I put them on -- but I could still hear the deafening sounds of his biological clock ticking away. It was loud. Relentless.

“Ya know, I always thought I’d have a kid by now,” my spouse blurted out, as he collected scraps of paper from the floor.

There it was. The one present he really wanted when he turned 36. And it was my fault I hadn’t gotten it for him. I removed the headphones and tried to deflect. “Well, 36 is really the new 26, so when you think about it, we’ve got plenty of time.” He wasn’t convinced. Just short of replacing my birth control pills with prenatal vitamins, my partner was raring to reproduce. I felt about as prepared for parenthood as the stars of “Teen Mom,” even though I was old enough to remember when MTV aired music videos hosted by Adam Curry.

It’s a delicate dance when a desire belonging to your significant other is entirely dependent upon your cooperation. The decision to, say, bring another human being into this world required my total support and collaboration. Not to mention the use of precious real estate.  But our timing was off.  My partner tried pushing me forward, I pulled back.

Google, my trusted confidant, assured me that my reservations were perfectly normal. Further sleuthing suggested I was a byproduct of “emerging adulthood,” a term coined by Dr. Jeffrey Arnett to describe a new life stage. Apparently there was a generation of people out there who were just like me, and delaying their transitions into new roles. The bad news was that I wasn’t married to any of these people.

Just three years older, my husband instigated domestic developments typically reserved for the female, while I happily followed his lead.  Though he once marveled at his good fortune of landing a spouse who didn’t give deadlines or ultimatums, I wondered if the novelty would wear off by my next birthday.

At 33, my biological age, slightly old for prime procreating, didn’t match my much younger state of mind. Although I possessed such grown-up attributes as a mortgage, a decade-long career and a medicine cabinet full of anti-wrinkle serum, I was a late bloomer who wanted off the conveyor belt traveling toward adulthood. Maybe the closest I could get to freezing time was freezing my eggs. After all, my body and my husband were currently in cahoots, both confident that I should be breeding by now, while my brain had never gotten the memo.  This was a compromise that could bridge that gap. Fertility experts have said oocyte cryopreservation wasn’t so much a guarantee, as an experimental insurance plan that might buy me a little breathing room. It was pricey, invasive and not entirely reliable (a tricky sales pitch indeed), but it was an option worth exploring. Wasn’t it?  Excited to share this potential breakthrough with my mate, my optimism was met with his skepticism. “Isn’t this just another way for you to keep stalling?” The man had a point.

The longing to keep from moving ahead too quickly was nothing new. I was the opposite of today’s thong-wearing tweens who can’t wait to grow up and star in their own reality series or sex tape. I defiantly shunned advancement throughout most of my adolescence.  Leaving elementary school to enter junior high was the equivalent of forcing an Amish person into employment at the Apple store.  I had avoided wearing a training bra until an unfortunate Hypercolor T-shirt incident made it necessary.  And I’m fairly certain I was the only teen in America who freaked out after successfully passing her driver’s test. That the state of New Jersey deemed me ready to commute to the mall by myself seemed sheer lunacy.

My unconventional timeline didn’t just confuse my husband, but also well-meaning friends, relatives and acquaintances who were eager to rush me through to the next relationship milestone. For years, a synchronized chorus of “whens” haunted me at birthday parties, bar mitzvahs and family barbecues. “When are you moving in? Getting engaged? Having the wedding? Having the baby? Isn’t it time?”

Even in my liberal NYC circle, many seemed uncomfortable with a female who was happily married but unwilling to adhere to tradition.  All this despite a new study from the Center for Work-Life Policy, revealing that 43 percent of college-educated women between 33 and 46 were child-free. Clearly, I wasn’t the first woman whose reproductive system was subject to the scrutiny of outsiders.  But why the fascination with my uterus? I had only married two years earlier. Yes, I lived in a Brooklyn neighborhood where strollers outnumbered hipsters. And I resided there with my husband. Yet my ability to use the phrase “my husband” without giggling was in itself an accomplishment. The idea of reproducing with said husband felt right. Just not right now.

Armed with “dad” jokes that he threatened to use in public, my mate’s eagerness to procreate increased, as college roommates, co-workers and cousins announced they were expecting. He was envious of pairs who were obviously on the same reproductive page. I was too.  He wanted to be a father before 40. I wanted to put the whole thing on ice. I felt like the Grinch who stole parenthood.

Why couldn’t we stay a family of two just a little longer before venturing into babyville? I had the urge to stretch out our newlywed status. Stay selfish. Spontaneous. Focus on my professional pursuits and passion projects. Learn to speak Mandarin if the mood struck. Turned out I was in good company. A report from the Pew Research Center suggested that the more educated and career-minded a woman was, the longer she waited to marry and have children. I didn’t need a Ph.D, MBA, or J.D., to know that pressing pause was the most sensible conclusion for me at the moment.

Becoming a mom was just so ... permanent. Unlike any other big decision that could be undone, corrected or negated, reproducing wasn’t just life altering.  It was everlasting. That scared the bugaboo out of me.  Without a doubt, I knew that I wanted to be a mother and a damn good one at that.  Eventually.  But like “Dame” or “Sir,” “mom” felt like a title that one earned with experience.

According to the unofficial handbook that existed in my head, mom material didn’t buy expired milk, refuse to drive on highways or forget to pay their credit card balance. They didn’t have major knowledge gaps or technology-related meltdowns when their laptop crashed.  Moms knew how to properly roast a turkey and how to proceed when a penny is accidentally ingested.  In addition to giving (and hopefully receiving) unconditional love, motherhood meant providing guidance, putting yourself second, being cool with drool and worrying just enough. I had yet to master the maternal art of worrying precisely the right amount, and frequently found myself convinced that loved ones were kidnapped or dead when their phones went straight to voice mail. This didn’t bode well for me as a mom.

I had practice-parented with pals’ offspring on a few occasions. I’d sipped imaginary tea from imaginary saucers. Led living room dance parties. Wiped chocolate cake off tiny mouths, and what I’d naively assumed was chocolate cake, off tiny hands. But I was the camp-counselor stand-in, simply playing pretend in a real-life waiting game.

Still, I tried to find validation for my procrastination. A recent study I scooped up from the Population and Development Review said that people who became parents later in life were actually happier and more fulfilled. Boom. “Pretty compelling stuff, no?” I asked my husband. “For people who plan to wait, sure,” he responded. Maybe it wasn’t technically planned, but in my mind, we were those people. Long past the point of becoming “young” parents, the only question was whether we’d reproduce in our mid-30s, late 30s or early 40s. Biology aside, what difference did it make?

On paper we both wanted the same thing: to start our own family. We just happened to want that same thing at different times. As the dance of our relationship revealed, timing was everything. If one person moved too quickly or too slowly, the whole thing became clumsy. Clearly we’d have to compromise. And that meant neither party would get exactly what they desired. So like a game of chicken, each of us waited, wondering who’d budge first. I didn’t want it to be me, pushed into a new role prematurely.  I was confident that postponing parenthood now promised the two of us, and our unborn offspring, a brighter, more satisfying future. That waiting until I was ready to be a mother meant I’d be a better mother. I only hoped that when I finally was ready, my body and my husband wouldn’t tell me it was too late.

Rachel Birnbaum’s personal essays have appeared in The New York Times, Newsday, New York Press and Salon. She works in advertising and lives in Brooklyn, NY. Follow her on Instagram and Twitter @rayrayawake.