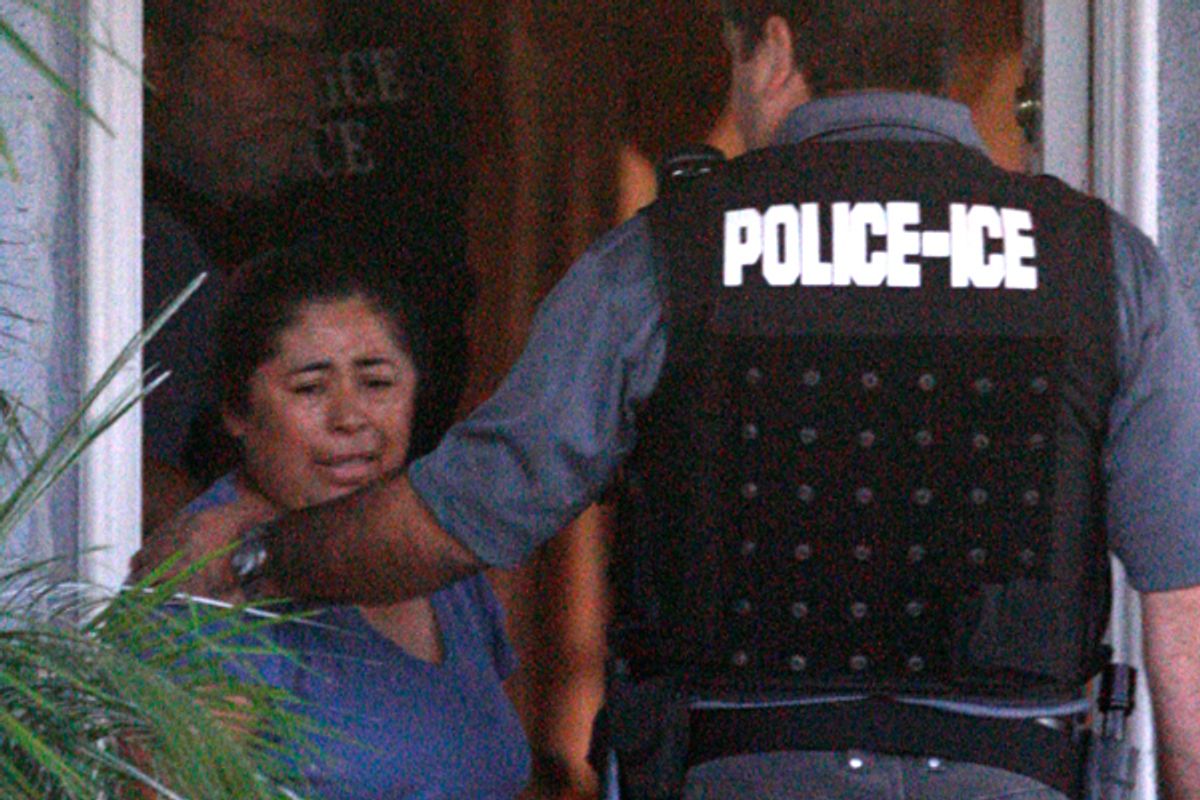 The Latino community’s anger at the Obama administration’s immigration policies has come to focus on the Justice Department's Secure Communities deportation program, which shares the fingerprints of those arrested by local police with Immigration and Customs Enforcement (ICE). A new study shows that the program, which has been criticized for turning local police into proxy immigration agents and sweeping up low-level and non-offenders, has also led to the wrongful arrest of thousands of U.S. citizens and jailed most without access to a lawyer or a chance to post bail.

“The results are disturbing because they point to a system that is funneling people towards deportation without due process,” said Aarti Kohli, director of immigration policy at Earl Warren Institute on Law and Social Policy at the University of California at Berkeley School of Law and lead author of the report.

The study found that ICE has arrested 3,600 U.S. citizens through Secure Communities.

“The person is released from serving whatever criminal proceeding, and instead of being free, ICE picks them up,” Kohli told Salon in a phone interview. “ICE says, ‘We have the right to investigate the claims of foreign-born people that they are U.S. citizens.’ But what we’re concerned about is that they are making the arrests before they investigate.”

An ICE spokesman described the report as "misleading and inaccurate," stating:

If there is a question about an individual’s status, ICE conducts appropriate follow-up. If the individual is a US citizen, ICE takes no additional action. In exercising its civil immigration functions, ICE does not detain US citizens.

Our members have seen too many instances of 'driving while brown' police stops that result in 'foreign seeming' citizens being picked up.  As citizens are not required to carry documentation, they often don't have the documents of their citizenship with them, and thus get funneled into the system.

“I think there may be a perception among the public, and maybe even among local law enforcement, that Latinos are illegal," Kohli said. "If you are a local sheriff or a police officer who is interested in enforcing immigration law, then Secure Communities is a tool for you — particularly if you have a bias — to focus your arrests on a specific population.”

In addition, the report found that 88,000 U.S. citizens have had a family member detained under the program. Obama is scrambling to win over the Latino community in advance of the 2012 elections, and this summer pledged to exercise prosecutorial discretion and spare more “worthy” undocumented immigrants from deportation. But advocates remain unconvinced.

“I’m not aware of anything that’s been implemented that will really change the way ICE is doing things,” says Kohli.

“It’s clear that this program is eroding everyone’s rights,” says Sarahi Uribe of the National Day Laborer Organizing Network, “U.S. citizens and non-citizens alike. You’d think that with something this embarrassing for our democracy, that the administration would stand up and terminate this once and for all.”

Supporters say Secure Communities is a big improvement and deserves to continue.

"Critics need to remember the situation before Secure Communities, where illegal aliens who committed crimes would be arrested and processed and incarcerated and released over and over again," said Jessica Vaughan, director of policy studies at the conservative Center for Immigration Studies. "ICE had no way of learning who they are, where they were, and what havoc they were causing in their communities.”

Yet some local and state officials have objected to the program, and were angered and confused over whether their participation is mandatory. Initially, ICE said the program was voluntary, and only later declared that it was mandatory as local elected officials and law enforcement became more vocal in their criticism. The governors of New York, Massachusetts and Illinois have all declared this year that they will pull out, but it’s not clear if they can. Rep. Zoe Lofgren (D-Calif.), who has led congressional opposition to Secure Communities, has accused the Department of Homeland Security of making “false and misleading statements to local governments, the public, and members of Congress.”

In June, ICE acknowledged that the program was not performing as advertised, telling the Guardian that “DHS is committed to working with all partners to address questions about the program."

Ice is conducting a top-to-bottom review of Secure Communities to ensure that the program is meeting our priorities and is operating efficiently and effectively. They are also conducting an analysis of data to identify any irregularities that could indicate misconduct in particular jurisdictions, so that we can immediately initiate corrective actions. At the same time, we are exploring ways to address concerns with the program, so that it continues to focus on individuals who have broken criminal laws.