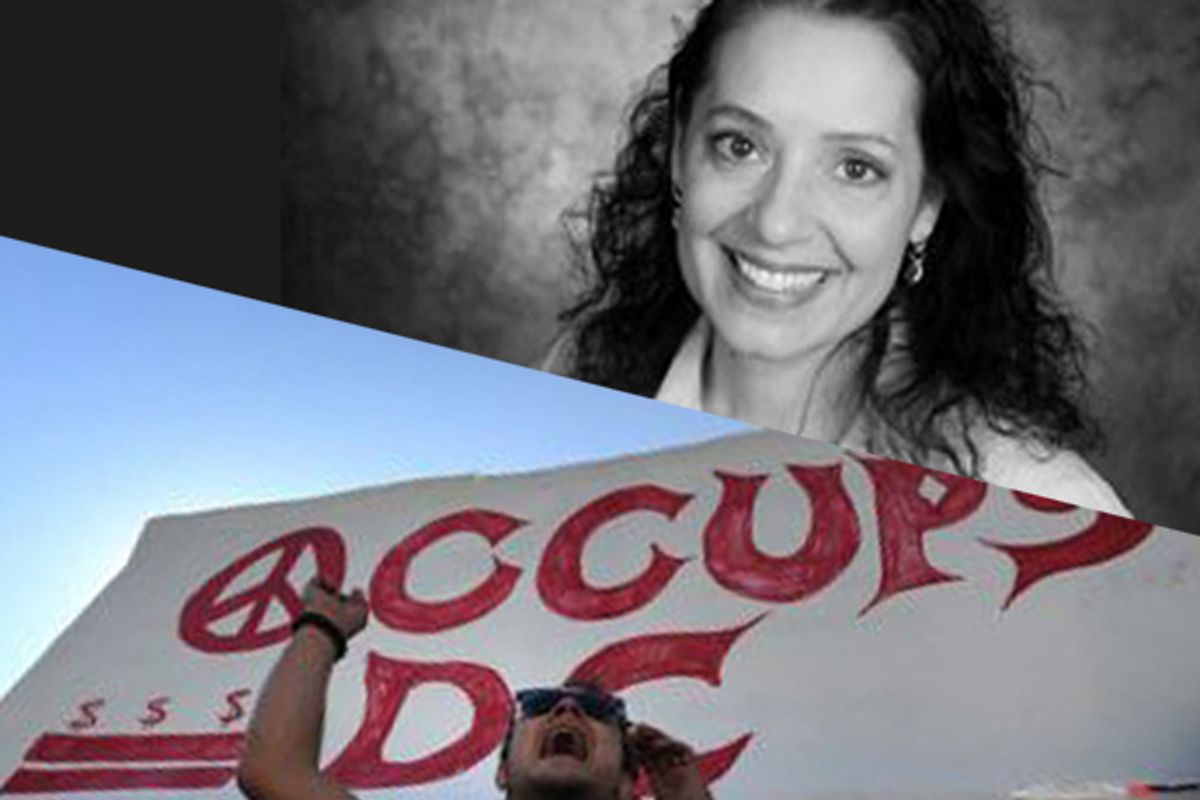 UPDATED BELOW
Lisa Simeone, host of two cultural programs on National Public Radio, was fired from one of her positions last night for her leading role in the Freedom Plaza occupation in Washington, D.C.  The proximate cause was a series of blogs posts in the Daily Caller asserting that she had violated NPR's code of ethics, an allegation which Simeone denies.

"It overblown. Everyone's overreacting," Simeone told Salon in a phone interview. "It's like McCarthyism."

Simeone, a former weekend host of NPR's "All Things Considered" show, had not worked directly for the network since 2002. As a freelancer contracting with WDAV, a music and arts station in Davidson, N.C., she hosts NPR's "World of Opera" program.  NPR and WDAV released statements today saying they are "in conversation" about Simeone's future.

[UPDATE 2:35 pm. Scott Nolan, station manager of WDAV, tells Salon that Simeone will remain as host of "World of Opera."

"Her activities outside of the job do not violate anything in our employee code and have in no way affected her job performance," Nolan said in a phone interview. "She's a terrific host and we look forward to working with her."]

Simeone has been active in a group called October 2011 which has occupied Freedom Plaza in downtown Washington since Oct. 5. The group planned its action last spring before the Occupy Wall Street movement emerged. The October 2011 group has since joined forces with the Occupy DC movement based a few blocks away in McPherson Square.

The Daily Caller is using Simeone's exercise of her First Amendment rights to beat up on NPR for its liberal ways. The conservative Web site said yesterday:

The political advocacy Simeone has displayed also appears to be an affront to what incoming NPR CEO Gary Knell has said he’d like the network to be: “It’s about journalism, it’s about news,” Knell, who starts on December 1, told the Associated Press after he got the job. “It’s not about promoting one political agenda or another.”

The problem, says Simeone, is, "I'm not an NPR journalist. I am not paid by NPR. I don't do news. I don’t do analysis. And I have never talked about the occupation movement on the air. I do this entirely in my free time."

Simeone said she was fired Wednesday night by Moira Rankin, executive producer of "Soundprint," a weekly documentary program that Simeone hosts. The program, independently produced, airs on NPR stations around the country.

"It was bewildering," Simeone said. "She started by quoting all these reports from the Daily Caller, and I didn't know even what that was. She said, 'Are you involved with this organization [October 2011]? I said, 'Yes, I was one of about 50 people who helped put this together.' She said, 'That's a problem because I'm getting all these calls. I think you violated the NPR code of ethics.'"

"I said, 'Can you explain how?'" Simeone went on. "Scott Simon writes Op-Eds. Cokie Roberts [is paid] tens of thousand of dollars in fees talking to business groups. Mara Liasson goes on Fox TV to express her opinions. They all report on the issues -- which I don't do.  I finally said, 'Are you firing me?' She said yes."

As the Daily Caller has reported, NPR’s ethics policy for journalists forbids them from “engag[ing] in public relations work, paid or unpaid.”

The code allows for exceptions in cases such as “certain volunteer nonprofit, nonpartisan activities, such as participating in the work of a church, synagogue or other institution of worship, or a charitable organization, so long as this would not conflict with the interests of NPR in reporting on activities related to that institution or organization.”

Simeone says there is no conflict.

"I've never hid my views and my opinions have never leeched into what I do on NPR. People can listen to all my shows. When I was talking about 'Tosca,' I could have talked about the relevance today of Cavaradossi, the tenor who is a political prisoner and who is tortured. I didn’t mention it. It’s a show about opera, for God's sake."

Simeone called the spread of occupation movement in recent weeks "a wonderful flowering of citizenship" and said she had no regrets about supporting it , despite the fact that she lost a job.

"I'm really, really lucky," she said. "I'm married to man with a good job and my home is paid for. I'm way luckier than millions of people in this country. I'm not complaining."