If at first you don't succeed, steal your opponent's gimmicky tax plan, tweak it, and call it your own 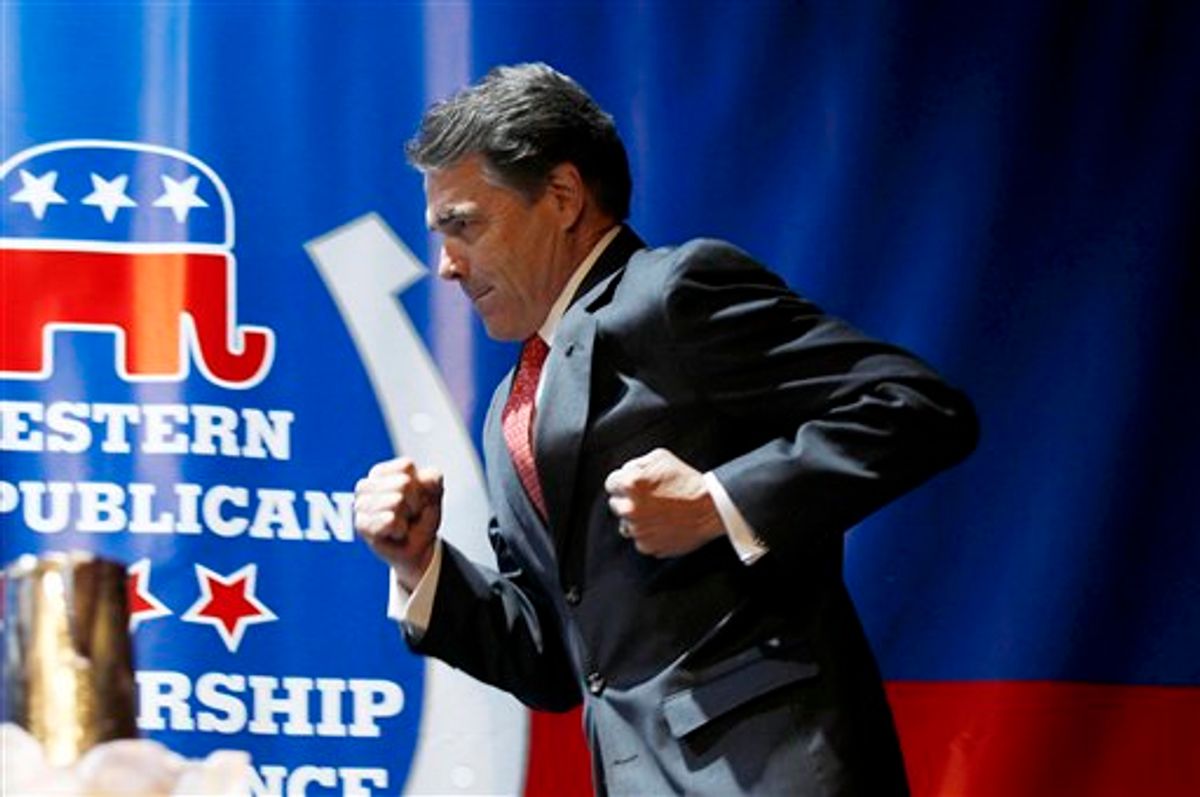 The day began with the political world struggling to decide if he'd finally turned in a strong debate performance on Tuesday night, or if by flashing unusual aggression he'd simply found a new way to turn off voters. Then came word of two new polls from the key early primary states of South Carolina and Florida, each showing Perry running in single digits, far behind Herman Cain and Mitt Romney, the latest humbling sign of how far he's fallen since the early weeks of his campaign. But by nightfall, Perry's fortunes turned, albeit in a backhanded way, with the appearance and bizarre removal of an online anti-Perry attack video from the Romney campaign -- apparent proof that, despite his polling slide, the Texan is still viewed by Romney and his team as their chief rival.

Between all of this, Perry also made some news, using a speech to the Western Republican Leadership Conference to announce that he will soon propose a national flat tax. How Perry's plan, which he said he will detail next Monday, is received may end up determining whether he moves back into contention in the GOP race or continues his slide toward irrelevance.

On one level, the move reeks of cynicism and desperation. Perry has been a candidate for more than two months, but hasn't said anything about a flat tax before now. In that same time, he's watched Cain overtake him in the polls while talking up his 9-9-9 tax plan -- a call to throw out the existing tax code and replace it with flat income, sales, and business transaction rates. This has allowed Perry to see which aspects of Cain's plan have gone over well with Republicans and which haven't. For instance, the new national sales tax that Cain is proposing has caused him considerable grief; not surprisingly, Perry's plan apparently won't include one. It's as if Perry has been using Cain as a flat tax stalking horse.

But that doesn't necessarily mean this is a bad strategic move.

Cain's recent surge in the polls reflects Republicans' disappointment in Perry's performance as a candidate and their reluctance to climb on board the Romney bandwagon. It also demonstrates just how popular the basic concept of a flat tax is. But Cain had a rough night at Tuesday's debate, with his rivals piling on the 9-9-9 plan while he struggled to formulate a coherent defense of it (for example: "We are replacing the current tax code with orange"). It's too soon to say for sure, but it may be that this marked a turning point for Cain's candidacy, with Republicans who instinctively like him and the flat tax idea concluding that his plan is riddled with troubling imperfections and would make an easy target for Democrats -- and that Cain himself is not nearly as strong a salesman as they initially thought.

If this is the case, it could mean that Cain's days as the main alternative to Romney are numbered, and that there's an opening for someone else to claim the role. It could also mean that there's an opening for someone to present a more carefully-constructed flat tax plan, which seems to be what Perry is doing. Given the constant, almost comical upheaval that has marked the GOP race, there's really no reason why Perry can't gain back the ground he's lost to Cain in the past few weeks, something that Steve Forbes, who built his 1996 GOP campaign around a 17 percent flat tax, predicted to the Daily Caller on Tuesday will happen:

“I’m elated by it,” Steve Forbes told me. “And I think Governor Perry will surge ahead of Herman Cain,” he said.

“Herman Cain gets credit of realizing the [current tax] code has to go [but] the virtue of what Governor Perry is doing is that he does not bring in a sales tax,” he said.

The challenge for Perry, if he is able to regain traction with his flat tax push, will be improving his own salesmanship. Exactly how he structures his plan remains to be seen, but the reality is that just about any flat tax proposal from a presidential candidate is going to have some significant flaws. He could (like Cain) faces charges that his plan is regressive. Or if he takes steps to guard against this (by imposing exempting incomes below a certain level from taxation or by maintaining certain tax deductions, for instance), his opponents could claim that the plan would blow a hole in the deficit.

Several previous presidential candidates have offered flat tax proposals, including Republicans Mike Huckabee, Dick Lugar, Phil Gramm and Forbes as well as Democrat Jerry Brown. The specifics of their plans all differed, but each received the same basic treatment Cain got from his fellow candidates on Tuesday night: Yeah, it's a bold idea and it's tempting, but...

So far, Perry's debate performances suggest he'll struggle to fend off that sort of attack. Which could be a problem because history suggests that it's easy to get voters (especially Republican voters) excited about a flat tax, and just as easy to make them to go wobbly -- something that Cain may be discovering now.