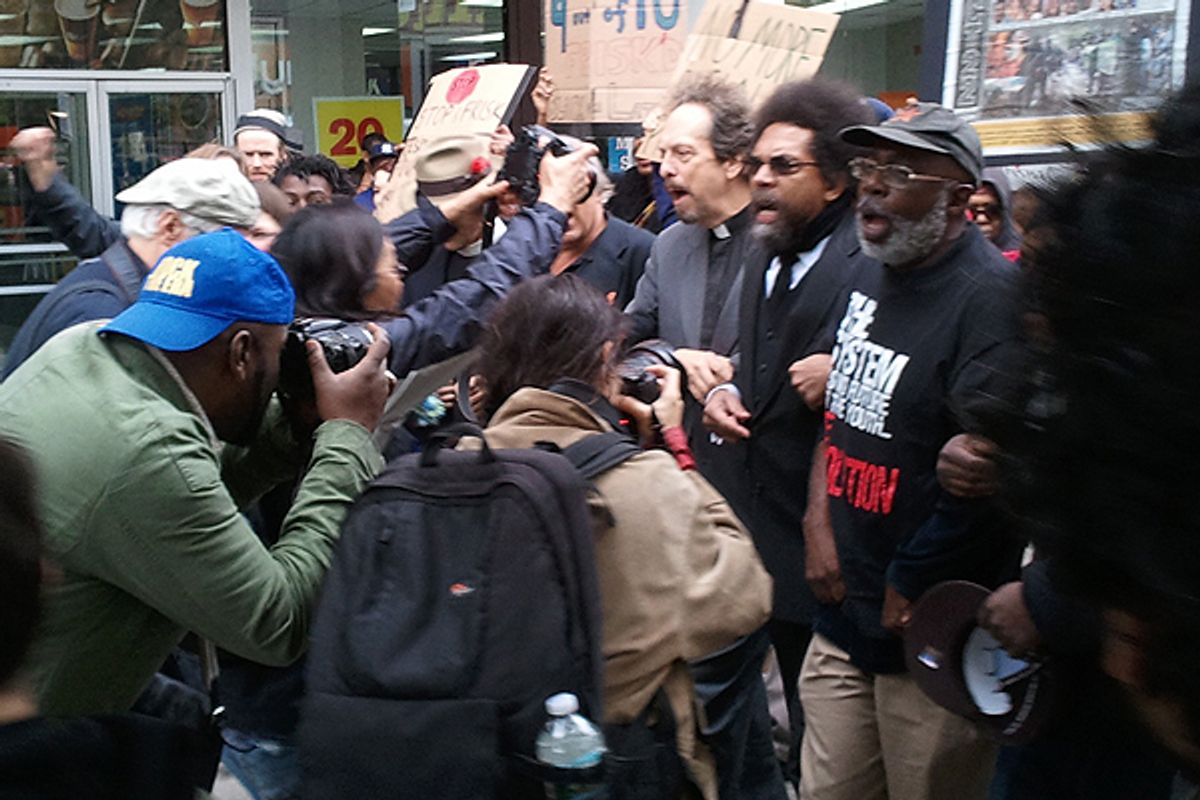 Occupy Wall Street headed to Harlem Friday afternoon in a solidarity march that ended with the arrests of a few dozen protesters including Princeton professor Cornel West -- just days after his arrest in Washington, D.C., at another demonstration.

The arrests, which occurred after marchers linked arms in front of a fortress-like NYPD station just off Frederick Douglass Boulevard, were a planned act of civil disobedience. The march, which was planned by existing left-wing groups but was also endorsed Thursday by the general assembly at Zuccotti Park, focused on the NYPD's practice of "stop and frisk." That refers to the controversial – and, critics argue, unconstitutional -- practice of officers stopping city residents on the street and searching them.

The number of stop and frisks have soared under Mayor Michael Bloomerg, with 600,000 stops performed last year. 87 percent of those stopped last year were black or Hispanic, a number disproportionate to their share of the population. And just 7 percent of the stops resulted in arrests, meaning the vast majority of those stopped committed no crime. The NYPD argues the practice reduces crime, but it has been coming under increasingly intense criticism in recent months.

The demonstration featured testimony from members of the community who had been the subject of abusive stops by the police. John Hector, 25, who was in the Navy until March, gave this account of being stopped without cause, and the humiliation that followed:

There has been activism surrounding stop and frisk for a long time. The headline here was the stunning media turnout -- dozens of reporters, cameramen, and photographers -- for a march of just a couple hundred protesters. The draw of Occupy Wall Street -- combined with West – undoubtedly contributed to the big media presence.

This is much the same effect I observed earlier this month at the millionaires' tax march on the Upper East Side: existing left/progressive groups partnering with -- and riding the wave of interest in -- Occupy Wall Street in order to advance specific goals.

Occupiers accounted for perhaps a quarter of the crowd, with the rest made up of Harlem locals and members of the Revolutionary Communist Party, the Center for Constitutional Rights, and clergy including the senior minister of Riverside Church.

Alice Woodward, a writer for the Revolutionary Communist Party's newspaper, told me she has been spending a lot of time in the last week -- including sleeping -- at Zuccotti Park. She and about seven others formed a stop and frisk working group, which brought the issue to the general assembly Thursday. The body endorsed the campaign against stop and frisk by consensus, she said.

"We at Occupy Wall Street must continue to join here today with the civil rights movement against stop and frisk," she told marchers.

For more pictures, from the day, see my Twitter feed.

Finally, here is West's speech just a few minutes before he and other protesters were arrested: