Homeless anti-Semite was around long before Occupy 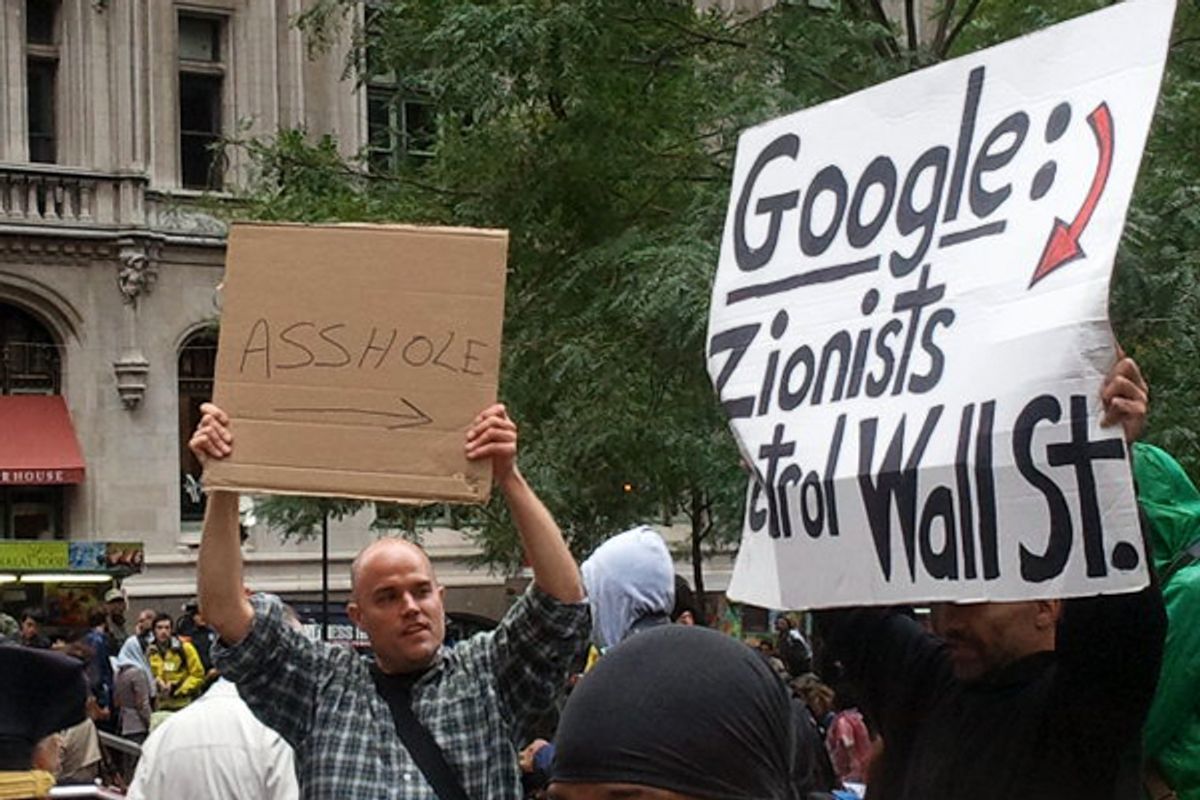 Right-wing pundits and Republican Party figures are continuing their attempt to smear the Occupy Wall Street movement as anti-Semitic, but we now have more evidence that the charge is profoundly dishonest.

To review: the Emergency Committee for Israel (which, it turns out, is funded by Wall Street) released an ad last week claiming that Occupy Wall Street is shot through with anti-Semitism, and demanding that Democrats condemn the protests. That attack has now been picked up by various pundits and GOP officials. The Republican National Committee started using the line against Democrats Wednesday. The Washington Post's Jennifer Rubin inevitably piled on. Fox News is all over the story.

Exhibit A in the ad (watch it below) is a sign-bearing man who yells that "Jews control Wall Street!" Now, as I've previously reported, Occupy protesters have taken to surrounding the man, who gave his name to me recently as David Smith, with rebuttal signs, including one that reads, "Asshole --->". Smith has been hanging around Zuccotti Park nearly every day for a couple of weeks.

But as Josh Nathan-Kazis reports at the Forward, Smith started carrying anti-Semitic signs around the financial district long before Occupy Wall Street existed:

During a trip to Zuccotti Park to observe the early stages of the protest on September 19, two days after activists first set up camp there, the Forward’s Nate Lavey and I watched as Smith entered the plaza with his cardboard sign, was confronted by one vocal passerby, and then was chased out of the occupied plaza by a shouting mob of activists. Police eventually intervened to separate him from the crowd.

Smith is a familiar face to those of us who work downtown. The Forward office is a few blocks from Wall Street, and I saw him at least once earlier this summer, picketing silently near the New York Stock Exchange.

That account matches the widespread hostility I've observed among occupiers against Smith. Given that Occupy Wall Street is based in a public space, occupiers simply don't have the power to permanently kick Smith out. Of course anti-Semitism needs to be confronted when it crops up. And that's exactly what the true occupiers have been doing.

Smith, according to a recent interview, is homeless and going blind from glaucoma. He previously told me that he made a sign reading "Google: Zionists Control Wall St." because God told him to. And yet, as Nathan-Kazis notes, Smith has been endlessly written about, photographed and filmed. He now represents Occupy's "anti-Semitism problem."

Another man featured in the Emergency Committee for Israel ad is Danny Cline, who appears to be an aspiring YouTube star with no involvement in Occupy Wall Street beyond showing up at the park to film his own rants.

The reality is that the Occupy Wall Street movement is filled with Jews. The Jewish Telegraphic Agency recently noted its distinctly "Jewish flavor." Fifteen hundred people attended a Yom Kippur service outside Liberty Plaza earlier this month, in what participants described as one of the most powerful and moving events of Occupy to date.

Still, the "Occupy Wall Street is anti-Semitic" meme -- a classic example of a tactic known as "nutpicking" -- spreads. Don't expect the fact that all this is largely based on two or three trolls to stop the right from continuing the attacks.

And here's video from the park on Yom Kippur: