How they get away with obstruction

A plan to save the jobs of teachers and firefighters has massive public support. But the Senate GOP just killed it 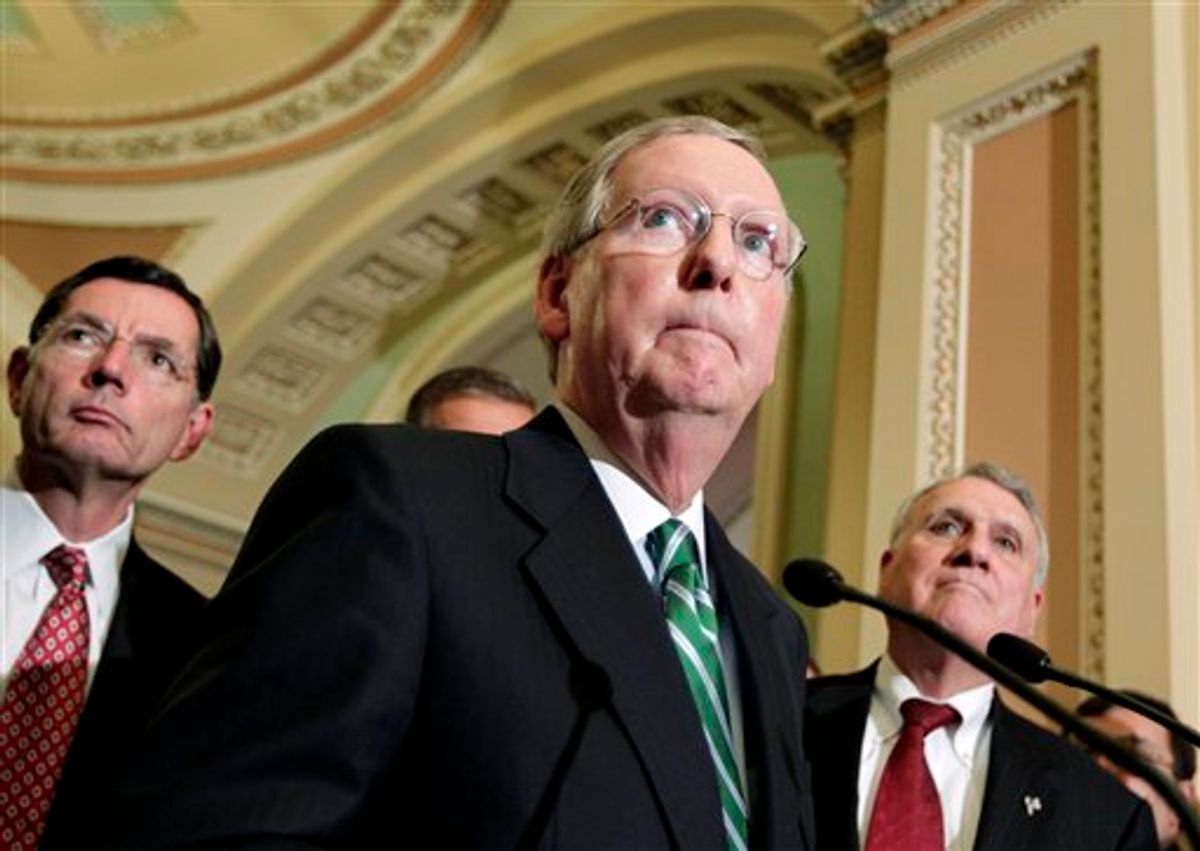 So you might think that all 47 Republicans in the U.S. Senate and the three Democrats who joined with them late last night are going to be in some seriously hot political water for killing a plan that would have sent $35 billion to state governments to create or preserve about 400,000 jobs for teachers and firefighters and that would have paid for it with a 0.5 percent tax on millionaires.

If only it were that easy.

The measure, which represents a slice of the $447 billion jobs bill that President Obama proposed last month and that was derailed in the Senate last week, died because Democrats didn't have the 60 votes needed to end a GOP-initiated filibuster aimed at preventing it from being debated. The three Democrats who stood with the united Republican bloc were Ben Nelson of Nebraska, Mark Pryor of Arkansas and Joe Lieberman of Connecticut (who is technically an independent, but who caucuses with the Democrats). This came after Obama spent three days on the road trying to make it clear what exactly the GOP was trying to stop. "We'll see if they'll fight just as hard for your jobs as they fight for their jobs," he told a group of firefighters on Wednesday.

Not that Obama and his party's leadership were at all surprised by the outcome. The president concluded after the debt ceiling debacle this summer that good faith compromise with the Obama-era GOP simply isn't possible. The purpose of Obama's jobs push is to draw attention to the GOP's refusal to even consider extremely popular ideas that could measurably improve the economy, convincing voters to blame Republicans -- and not Obama -- for their economic anxiety.

But it's amazing what a difficult, maybe even impossible, task this is. The problem is that most voters just don't follow the day-to-day events in Washington that closely, and the news that they do hear come out of Congress often sounds to them like familiar and inane partisan racket, the kind of noise they've been hearing forever. Thus, they tend to rely on broad considerations that have little to do with the details of congressional debate in forming their opinions. This creates some of the maddening contradictions that are often seen in polling.

For instance, while a majority of Republican voters tell pollsters that they're OK with higher taxes on millionaires and more federal aid to state governments, that  doesn't mean that these issues are particularly important to them or that they're paying much attention -- or any attention at all -- to how they're being addressed in Congress. What they have is a strong sense of loyalty to the Republican Party, which means they generally take their cues from opinion-shaping Republican leaders. And essentially every opinion-shaping Republican leader for the past three years has been sounding the alarm of President Obama's "radical" and "failed" policies. So Republicans in the Senate can block tax hikes on the rich and aid to state governments all they want; as long as they're unified in bashing Obama, most Republicans will stick with them and continue giving Obama failing marks. This also applies to the fair chunk of "independent" voters who are functionally Republicans.

Then there are the actual swing voters, authentic independents who don't have a strong loyalty to either party. They are a smaller bunch than most people realize, but in theory Obama should have more luck getting through to them with his jobs crusade. But, like most other voters, they don't pay close attention to Washington or to politics in general. If they even hear about last night's filibuster, it may be through a 20-second news summary they half-listen to on their way to work, or through a headline on a newspaper article they skim or don't read at all. But instead of falling back on party loyalty to form their judgments, these voters tend to rely on the state of the economy -- something that spells disaster for Obama right now.

The same poll that showed wide support for the components of Obama's jobs bill also found that 86 percent of voters believe the economy is in "poor" or "somewhat poor" shape, and that 59 percent believe that Obama's plans aren't likely to improve things. This is just how it tends to go with swing voters: If they feel the economy is in good shape, they'll demonstrate broad support for and confidence in the president; if they don't, they won't. Again, this gives congressional Republicans wide latitude for obstructionism. They can continue killing initiatives that swing voters say they like, and many of them won't even notice. And those swing voters who do at least hear about it will still generally be susceptible to spin -- with the state of the economy determining which side's spin they favor. In other words, since the economy is miserable, swing voters are now inclined to embrace views that blame Obama. So Republicans can claim they're simply trying to fight another Obama stimulus, an argument that will have strong appeal to swing voters who a) don't follow congressional politics closely; b) want to blame Obama; and c) already believe the first stimulus was a failure.

This is what Obama is up against -- and Republicans know it, which is why they haven't had much trouble maintaining their united front, despite the individual popularity of everything they're trying to block. It raises the question of whether there's any point to Obama's plan to dare the GOP to filibuster more popular job-creating initiatives in the weeks ahead. Believe it or not, there is, as long as you're not expecting any sweeping, immediate results.

The justification can be found in some of the headlines that greeted last night's filibuster. Here, for instance, is the AP: "Senate GOP kills Obama's plan to subsidize hiring of teachers, first responders." And Reuters was more blunt: "Republicans block popular piece of Obama jobs bill." It seems conceivable that a drumbeat of these sorts of headlines could, over time, penetrate the consciousness of some of the swing voters who are instinctively inclined to blame Obama over the GOP. And if it leads to 1 or 2 percent of the swing electorate deciding in 2012 that Republicans behaved too irresponsibly to be given power, that could make the difference, given how close the election should be.

For Obama, that may be the best-case scenario here. But for anyone who's just hoping for a Keynesian boost to the economy now, no matter how modest, that's probably not much consolation.