Inside the Mideast prisoner swap

The "peace process" is dead and Hamas knows how to negotiate. 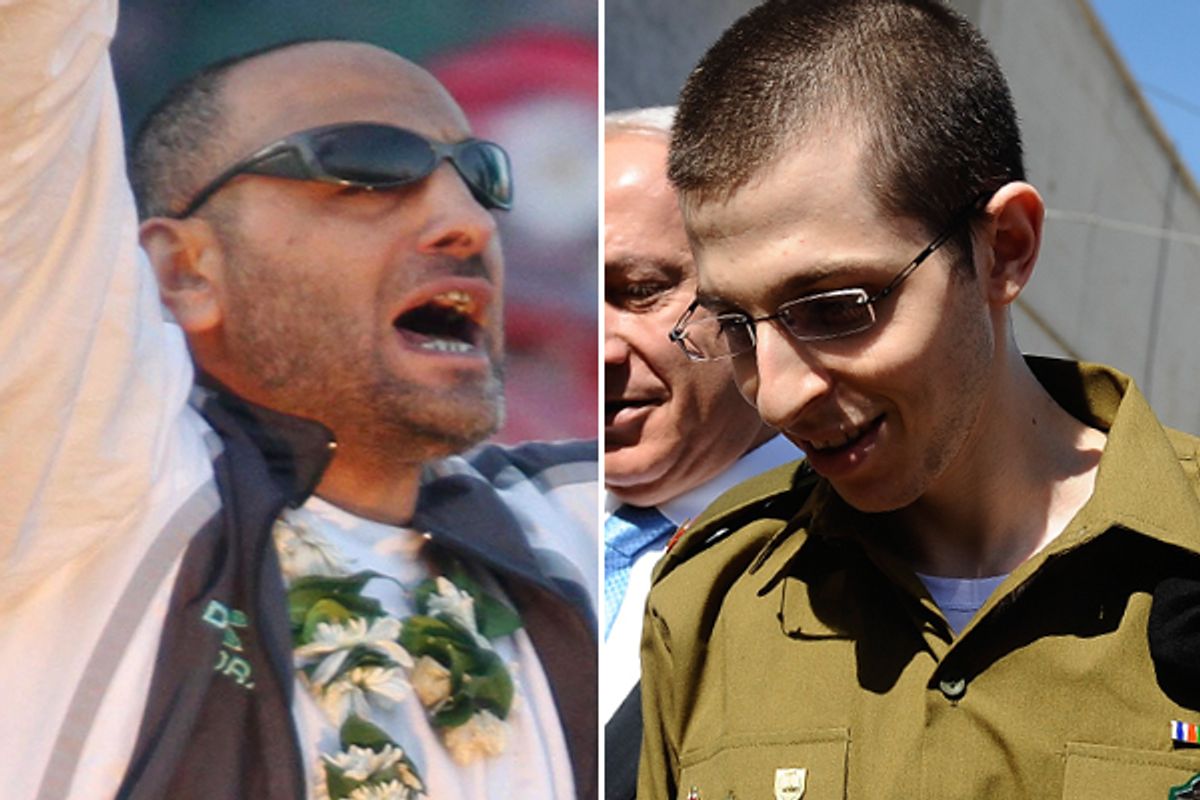 In recent days, we've witnessed the rare spectacle of Israelis and Palestinians celebrating at the same time. Ironically, this was the result of negotiations between the government of Israeli Prime Minister Benjamin Netanyahu and the Palestinian resistance organization Hamas, which Israel and the United States describe as "terrorists." It was a moment that revealed what it would take for negotiations between seemingly irreconcilable foes to result in a credible agreement and why the current "peace process" has gone nowhere.

But in the wake of the Israel-Hamas agreement under which 1,027 Palestinians held by Israel are being released in exchange for one Israeli soldier held in Gaza, the editors of the New York Times expressed a good deal of frustration.

"If Mr. Netanyahu can negotiate with Hamas -- which shoots rockets at Israel, refuses to recognize Israel's existence," they wondered in an Oct. 18 editorial, "why won't he negotiate seriously with the Palestinian Authority, which Israel relies on to help keep the peace in the West Bank?"

What are the chances of this happening? The Times was referring to the supposedly "moderate" Ramallah-based Palestinian Authority of Mahmoud Abbas, whose U.S.-backed security forces collaborate with Israel to keep any form of armed or unarmed Palestinian resistance in check. The Times noted that Netanyahu had defied Israeli families whose loved ones had been killed in armed attacks by some of the Palestinian prisoners: Why can't Netanyahu also buck the wishes of Israeli settlers in the West Bank in a similar way and put in place a settlement freeze?

Abbas insists he won't return to negotiations until Israel stops building Jewish-only colonies in the West Bank, especially in and around eastern occupied Jerusalem. The blame lay squarely with Netanyahu according to the Times: "The problem is not that he can't compromise and make tough choices. It's that he won't."

In calling for a return to negotiations between Israel and the PA, the Times was echoing others -- including the Obama administration -- who are incapable of seeing alternatives to the failed U.S.-backed "peace process."

But this is terribly unfair to the Israeli prime minister. Netanyahu has done absolutely nothing that his supposedly more "dovish" predecessors, Prime Minister Ehud Olmert and Foreign Minister Tzipi Livni, did not do. Olmert and Livni did negotiate with Abbas without ever stopping settlement construction and without advancing proposals that would meet even Abbas' minimalist demands. Netanyahu says he's willing to do the same and constantly begs Abbas to meet him at the negotiating table.

And the Olmert government, like Netanyahu's, negotiated with Hamas. The Palestine Papers -- a trove of documents and minutes related to the peace process that was leaked to Al Jazeera in January -- shed light on what happened.

In 2008, Israel and Hamas were very close to reaching the deal that Netanyahu eventually struck: about 1,000 Palestinian prisoners for the Israeli prisoner of war. But it was Abbas' Palestinian Authority, the leaked documents unambiguously show, that lobbied hard and successfully for Israel not to do the deal. PA officials argued -- as the Times now does -- that handing a victory to Hamas would damage Abbas, who has nothing to show for all his cooperation with the occupation.

Instead, PA officials wanted Israel to negotiate with them over a prisoner exchange. But as Livni explained to senior Abbas aides at a March 31, 2008, meeting in Jerusalem, "We wanted to talk with Abu Mazen [Abbas] but he cannot release Gilad Shalit."

In all those cases, enemies who had previously been declared off limits ("we don't negotiate with terrorists") were brought into the fold because they were in a position of strength.

Similarly, the reason Israel has been willing to limit its military assaults on the Gaza Strip recently is in part because Hamas and other Palestinian factions have been able to exercise limited deterrence with their rockets.

Netanyahu will not impose a settlement freeze in response to Abbas' demands simply because Netanyahu believes in and supports the colonization of the West Bank, and Abbas does not have the power to make him.

Israel only negotiates seriously when it feels it has no other choice and when its adversary has enough power to impose an outcome it cannot prevent by other means.

Does this mean that Hamas and Israel could potentially do a deal over the broader issues? The answer is no, but not because of the conventional wisdom that Hamas doesn't recognize Israel, espouses violence, and refuses to accept signed agreements.

In fact, Hamas has said repeatedly -- including in a New York Times interview with its leader Khaled Meshal -- that the movement is willing to accept a Palestinian state in only the West Bank and Gaza Strip, provided all Israeli settlements are removed and the rights of Palestinian refugees are respected.

But while Hamas was strong in the specific context of negotiations over prisoners, the movement by itself or even in combination with other Palestinian factions is not strong enough to compel Israel to meet broader demands.

The power balance remains too lopsided against Palestinians for negotiations to be anything more than what they have been for two decades: a cover for Israel to continue colonization.

For this reason in 2005, Palestinian civil society, independently of all political factions, issued its unified call to supporters around the world for boycott, divestment and sanctions (BDS) on Israel. It urges that these "punitive measures" be maintained until Israel recognizes the Palestinian people's rights and respects international law in three ways: an end to the occupation and colonization of Arab lands conquered in 1967; recognizing the fundamental rights of Palestinian citizens of Israel to full equality; and respecting the rights of Palestinian refugees, including the right of return. These are goals that unify all Palestinians, whether they support the fast-fading two-state solution, or a single democratic state incorporating Israelis and Palestinians throughout historic Palestine (Israel, the West Bank and Gaza Strip together).

Modeled on the successful campaign that helped isolate apartheid South Africa, the logic is straightforward: As long as Israel enjoys an overwhelming power advantage it will never respect Palestinian rights nor dismantle its racist, colonial and apartheid-like policies. Why should it when it pays no price for doing what it pleases?

The BDS campaign was prompted in part by the response -- or rather the lack of it -- to the 2004 International Court of Justice ruling that Israel's West Bank wall is illegal. When no governments took any measures to enforce the decision, Palestinians realized that global civil society would have to act.

Similarly, Israel remains in violation of countless U.N. resolutions, and has faced no accountability whatsoever for the war crimes and crimes against humanity committed over many years, but most recently in Gaza in 2009 and detailed in the U.N.-commissioned Goldstone report.

Could the BDS shift the balance of power such that Israel would be forced to concede Palestinian rights? The international movement's rapid growth has convinced some influential Israelis that it can. Last year, the Reut Institute, a think tank with close ties to the Israeli government, called for an all-out campaign of "sabotage" and "attack" on "delegitimization" of Israel. It especially focused on BDS, and warned that the movement's " momentum is gaining."

In response to the Reut report, the Jewish Federations of North America and the Jewish Council for Public Affairs launched a multimillion-dollar initiative to "combat anti-Israel boycott, divestment and sanctions campaigns."

And in his May speech to the Israel lobby (AIPAC), President Obama vowed that the U.S. would help Israel fight "delegitimization."
But he warned nonetheless that "the march to isolate Israel internationally -- and the impulse of the Palestinians to abandon negotiations -- will continue to gain momentum in the absence of a credible peace process and alternative."

Israel's isolation is growing not only because of BDS, but because of regional developments including the uprising that toppled Egypt's pro-Israel Mubarak regime, and Turkey's break with Israel over the Gaza siege and the attack on the Mavi Marmara.

While this might dismay Obama, those who yearn for negotiations leading to peace and justice should do all they can to hasten the erosion of Israel's power advantage over the Palestinians. After all, as this week's events demonstrate, Israel only negotiates seriously with the strong.