"1Q84": Love in an alternate universe 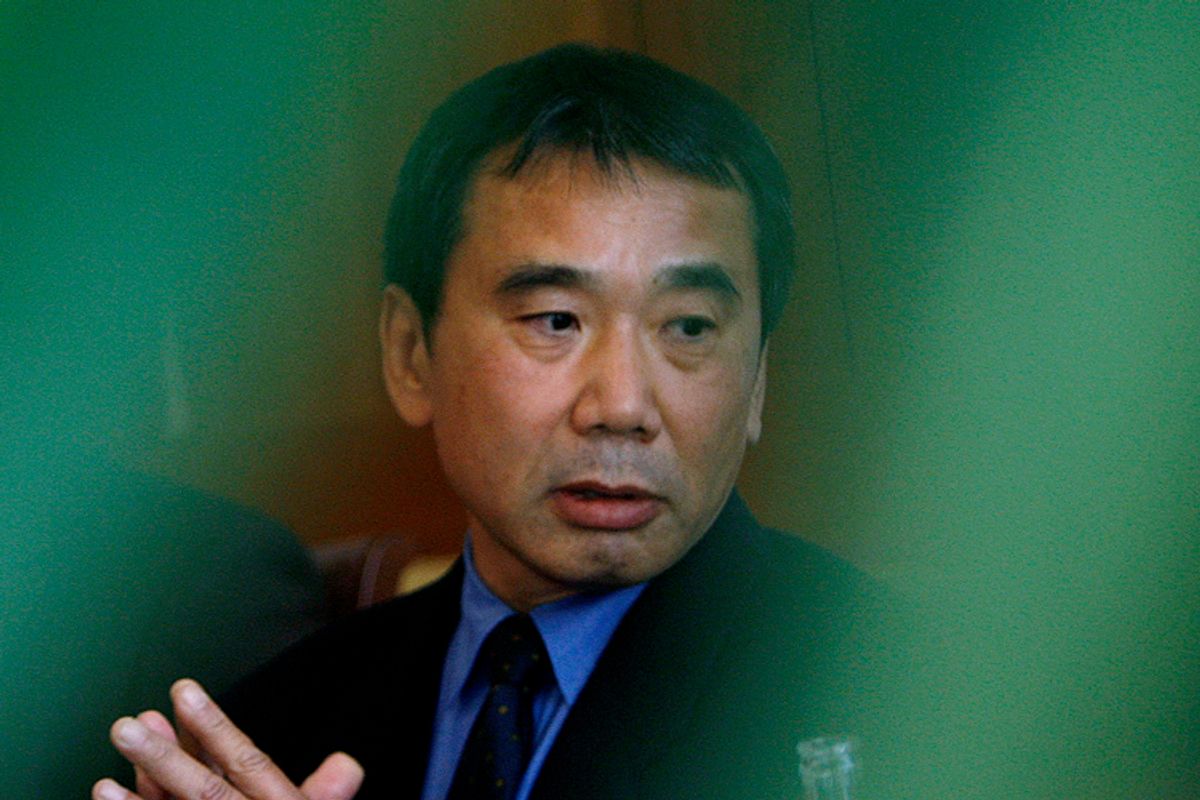 "1Q84," Haruki Murakami's new meganovel (it was published in three volumes in his native Japan), begins with a young woman in business attire on her way to an appointment in Tokyo. Her taxi gets stuck in a traffic jam on an elevated highway, and the cabbie suggests that if she's really anxious to arrive on time, she might want to climb down a nearby utility access ladder and jump on the subway. So climb down she does, finding her way out of a neglected storage area and off to her appointment -- which turns out to entail killing a man with a very slender, very discreet silver needle to the back of the neck.

The woman, Aomame, has done this sort of job before, and her life continues more or less as usual, until she notices that policemen's uniforms are somewhat different, and that they're carrying more serious handguns than she remembers. She asks a friend when these changes took place and is told it happened a couple of years earlier, after a big shootout with a radical group up in the mountains. A faithful newspaper reader, Aomame has no recollection of such an event. Not long after that, she looks up into the night sky to see two moons: the accustomed one and "a small, green, misshapen" one next to it.

Like so many Murakami characters, Aomame is a self-disciplined, levelheaded loner who, when confronted with the impossible, only briefly considers the likelihood that she's lost her mind. Instead, she decides that when she climbed down that ladder, she stepped out of the 1984 she had been living in and into an alternate version of her world, one that she calls 1Q84 (a bilingual pun suggesting uncertainty). She'd like to ask someone about the second moon, but she can't: If she's still in 1984, they'll think she's crazy for seeing it, and if she really is in 1Q84, they'll think she's crazy for finding it strange. So she resolves, pragmatically, to take it all in stride.

The novel's other principle character is Tengo, a math tutor and aspiring author who gets talked into heavily rewriting a novel by an odd teenage refugee from a secretive religious cult. A prodigiously ugly private detective hired by the cult to find Aomame also becomes a central figure later in the book, but "1Q84" mostly describes the long, slow process by which Tengo and Aomame, who knew each other as schoolchildren, seek to reunite. Never was a love story so overpopulated with hardcore isolates, people who have severed ties to family, maintaining a cool distance from friends and lovers while investing their identities in the rigorous pursuit of some personal cause or obsession. The possibility that Tengo and Aomame might at last come together seems genuinely epochal because it will overthrow the atomized social order that otherwise prevails.

This faith in the significance of Tengo and Aomame's bond makes "1Q84" warmer than some of Murakami's other "big" novels; since 2002's "Kafka on the Shore," a greater yearning toward human connection has suffused his fiction. This is still the sort of story in which a character goes about some perfectly mundane daily business on one page (Murakami is famous for his peculiarly fascinating descriptions of food preparation) and has an inexplicable, uncanny experience on the next, as if slipping back and forth between waking and dreaming. But while his early novels took their (often perplexing) structure from dream logic, "1Q84" is a book about wanting to wake up.

There's still plenty of weirdness along the way. Behind the cult is an ambiguous band of supernatural entities, the Little People, who are enraged when the novel Tengo co-writes becomes a hit and somehow lessens their power. Even creepier is a never-seen collector of state television license fees, who pounds on the characters' doors in the middle of the night, berating them as they cringe in silent distress; this may or may not be a spectral projection of Tengo's comatose father. A rosy-cheeked nurse passes on prescient messages from an owl. Characters are doubled, or split, and some apparently innocuous encounters leave them with the sensation of having had pieces of their souls removed.

The spell cast by Murakami's fiction is formed in the tension between his grounded accounts of everyday life and the otherworldly forces that keep intruding on that life, propelling the characters into surreal adventures whose exact meaning rarely gets explained. Over the years, his style has gotten plainer and plainer -- which, for one thing, makes it more translatable. It's worth noting, though, that one of the two translators who worked on this book (Jay Rubin; the other is Philip Gabriel) recently told the New York Times that Murakami's Japanese often reads as if it had been translated from English. The creation of a relatively frictionless "international" style seems more a side effect of the author's stripping-down process than the goal.

This is not great writing by conventional literary standards. Murakami isn't afraid of repetition, outright cliche ("They were just letting off steam") or the overuse of such vague, anodyne terms as "special," and the characters all tend to express themselves with the same declarative, matter-of-fact diction ("This isn't a question of whether I want to or not, or whether it's the right thing to do. Once I start something, I have to see it through"). Yet even if you haven't read his earlier, more lyrical novels, the occasional figurative flight here -- about "an inexhaustible source of clouds" in the north where people "worked silently from morning to night to make clouds, like bees make honey, spiders make webs and war makes widows," for example -- indicates that the author's spartan style is a deliberate choice.

Murakami has long described his fiction as an extended foray into his own unconscious rather than a psychologically realistic portrayal of social relationships. You're either tuned to his frequency or not. A surprisingly large number of people are; bookstores are staging midnight festivities for the day, Oct. 28, when "1Q84" goes on sale -- an honor usually bestowed on YA phenomena like the Harry Potter and Hunger Games series. Readers speak of being hypnotized by "The Wind-Up Bird Chronicle," despite that novel's many unresolved enigmas and dangling loose ends. "1Q84" has the same heady effect. (Although "Wind-Up Bird" probably remains the best entry point for those unfamiliar with this remarkable novelist.)

References to Carl Jung in "1Q84" suggest that Murakami has himself contemplated the paradox of an author who mesmerizes strangers by excavating the depths of his own psyche. You could say that the units with which he builds his fiction aren't words and sentences but emblems and actions, storytelling elements that are, if not pre-literary, then extra-literary. Sanding off the surface texture of the language only makes the lines of this underlying structure more visible and immediate. Translation is at the center of what Murakami does; not a translation from one tongue to another, but the translation of an inner world into this, the outer one. Very few writers speak the truths of that secret, inner universe more fluently.

Salon's 1997 interview with Haruki Murakami, on the U.S. publication of "The Wind-Up Bird Chronicle"

Salon's review of Haruki Murakami's "After the Quake"

Salon's review of Haruki Murakami's "Kafka on the Shore"

1q84 Books Fiction Haruki Murakami Our Picks What To Read