Why I can't hate Coldplay anymore 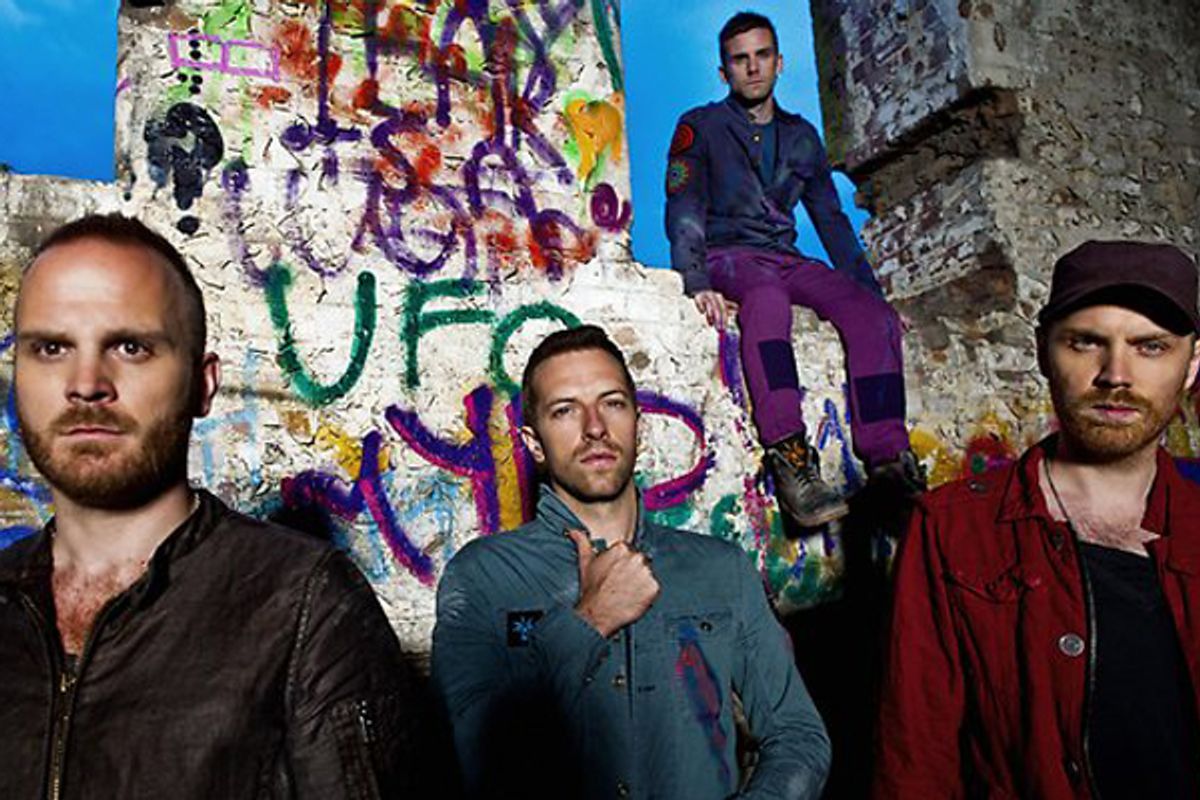 This past June, in front of tens of thousands of fans at Britain's annual Glastonbury Festival, Chris Martin balked. About halfway into a new song titled "Us Against the World," the Coldplay frontman abruptly stopped singing or playing his guitar. "Will, can you do that verse again?" he asked drummer Will Champion with a broad grin. "I fucked that one up ... We're supposed to be professional headliners." Luckily, they're supposed to be the sort of professional headliners who also connect with listeners on a human level. They finished the song.

Five albums in, the British band has found an uncanny equilibrium between swooping, arena-ready pop and cheesy, down-to-earth humility. "Mylo Xyloto," which arrives Tuesday, is the most sonically expansive record yet by Martin, Champion, guitarist Jonny Buckland and bass player Guy Berryman. But it's also their most focused, without the overblown "anthems for anthems' sake" of 2005's "X&Y," or the inarticulate self-importance of 2008's "Viva La Vida or Death and All His Friends," their first collaboration with Brian Eno (the ambient musician who magicked U2 to multi-platinum status). If Coldplay specialize in creating the illusion of intimacy on an arena scale, then their latest effort succeeds by being bigger and smaller at the same time. Familiarity has bred admiration, however grudging.

Love them or loathe them, Coldplay are indisputably one of the biggest rock bands in the world. They've won seven Grammy Awards. "Viva La Vida" was the best-selling 2008 album on the planet. "Paradise" and "Every Teardrop a Waterfall," the first two singles from "Mylo Xyloto," had already sold more than a million downloads as of an Oct. 13 profile in the New York Times. "They've found a way, identity-wise, to be from everywhere," John Mayer told SPIN in 2004, "whereas most bands come to America with 'British' written all over them." Glastonbury wasn't exactly Coldplay's only festival headlining gig this year. Lollapalooza in Chicago? Fuji Rocks in Japan? Splendour in the Grass in Australia? These guys topped bills everywhere.

Of course, Coldplay's hugeness goes way beyond records and shows. Martin is married to actress Gwyneth Paltrow. The two have been asked to be godparents to Beyonce and Jay-Z's unborn child. Dutch filmmaker Anton Corbijn, whose resumes includes music videos for U2's "One" and Nirvana's "Heart Shaped Box," along with such movies as "The American" and "Control," will direct a live Web broadcast of Coldplay's live concert performance in Madrid on Wednesday. Willie Nelson covered the band's 2002 "The Scientist" for a Chipotle charity ad. As of this month, their songs are even available for the video game franchise Rock Band.

Success attracts haters. In 2005, New York Times pop music critic Jon Pareles called Coldplay "the most insufferable band of the decade." U2's Bono has called Martin a "wanker" and a "cretin"; he later apologized. Radiohead's Thom Yorke once dismissed Coldplay as "lifestyle music." More recently, Portishead's Geoff Barrow has said his least favorite thing about playing European festivals is going on next to Coldplay, "with their water cannons or fucking fireworks or whatever the fuck it is. Come on." German electronic musician Apparat has said of anyone who compares his new album to Coldplay, "I think they should fuck off." Neon Indian's Alan Palomo once choked on kale salad laughing at the band's expense. Joe Satriani, the artist formerly known as Cat Stevens, and an American band called Creaky Boards have all accused them of plagiarism.

Coldplay disarm their critics with self-deprecation. Martin praised Bono, saying U2 are in "a way different league." A virgin until age 22, he knew what he was saying when called his feelings toward Radiohead "like unrequited love." On "The Colbert Report," Martin joked that the "million" in their more than 50 million total albums sold is a typo (discussing the U2 dispute, his voice cracked like a schoolboy's). More than once in recent interviews, Martin has told a story about not being recognized by a taxi driver who was telling him that the guy from Coldplay lived in his neighborhood. "We know our lyrics are a bit shit," Martin has said.

Paltrow, with whom Martin has two children, is the biggest indication of Coldplay's rock-star status, but the band doesn't flaunt her role, either. Martin effectively bans questions about his wife from interviews, though he has also compared marrying her to "winning the lottery." Paltrow not long ago tweeted, "Who do I have to bang around here to get an advance copy of the Coldplay album?" She has expressed sympathy for Martin's situation, though, saying: "He makes music for his fans, and he doesn't want people to conjure a lame famous couple when they're getting into his music. I get it." Sheesh, can't a guy even be resentful of rockers who marry movie stars anymore?

To be sure, Coldplay's exaggerated modesty isn't always appealing. The New Yorker music critic Sasha Frere-Jones once called Martin's apologies "increasingly suspect." A Salon writer previously likened Martin to former U.K. Prime Minister Tony Blair, and in fact the entire British upper class, which apparently adopts a self-effacing tone as a way of "slumming it." Of course, there's such a thing as false humility. Good luck distinguishing brilliant acting from sincere expression, though.

Either way, Coldplay's charm offensive appears to be having its effects. Take longtime Oasis songwriter Noel Gallagher, who once described the likes of Coldplay as "bland, faceless fucking trainee police officers." Referring to Coldplay's 2000 breakthrough hit, he recently told Pitchfork, "When I heard 'Yellow' for the first time, I immediately picked up the guitar and went, 'Fucking bastards, why didn't I write that?'" Who's the bigger wimp, the guy who writes a sappy song or the other guy who refuses to admit he loves it?

Critical reception of Coldplay has been thawing a bit, too. (Beloved Swedish pop singer Robyn's killer cover of "Mylo Xyloto's" initially panned lead single, "Every Teardrop Is a Waterfall," hasn't hurt much, either.) Just in time, too. "Mylo Xyloto" could easily go down as Coldplay's best album. It's definitely where they best balance their obvious desire for artistic respect with their undeniable ability to write songs that throngs of people want to chant along. This time, they don't do it by making choices that telegraph their seriousness or ambition, though there's an over-arching love story that they wisely keep pretty loose. Instead, Coldplay may well succeed at becoming the world's biggest rock band by redefining what it means to be a "rock" band altogether.

Originally conceived as two separate albums, and with a title Martin is coy about explaining, "Mylo Xyloto" oscillates between synthesized Top 40 sheen and hand-played acoustic vulnerability. In other words, it takes the Coldplay aesthetic -- "equal parts epic and endearing," as SPIN's Chris Martins (no relation) put it this summer at Lollapalooza -- and realizes it more vividly than ever before. Their optimistic anthems, packed with wordless hooks, have grown bigger by getting more inclusive, taking on tinges of rave and R&B (of which Rihanna's guest spot on breakup song "Princess of China" isn't even the best example). Their small, spare moments are all the more affecting for it, likely to catch more than a few skeptical listeners off guard.

It's not that Coldplay have given up on competing for artistic cachet. Quite the opposite, given how obsessively Martin focuses in the New York Times piece on what Bruce Springsteen and U2 did at similar points in their careers. They're just integrating their influences less obtrusively now. "Paradise" grafts the hip-swiveling, hook-stuttering sensibility of The-Dream onto keyboards that recall the early Blur song "Sing." The strobe-lit pulse of "Every Teardrop Is a Waterfall" suggests Underworld's "Born Slippy" and that brief British moment in the 1990s when rave became appealing to jocks. "Charlie Brown," the best song here, evokes the cathartic rush of Arcade Fire; "Hurts Like Heaven" makes LCD Soundsystem's "All My Friends" sound cheerful. Stadium-troubadour finale "Up With the Birds" quotes Leonard Cohen.

Coldplay's former peers, bands like Keane, Travis, Starsailor, Aqualung and Embrace, are either gone or many leagues below them now. Remember how those first two albums used to remind everybody of "Radiohead lite," but now they only sound like Coldplay? In a few years, when other rock bands sound like this, we won't compare them to any of their apparent influences: We'll compare them to "Mylo Xyloto."

That said, if "Mylo Xyloto" distills Coldplay's essence almost perfectly into a 14-track pop album -- Martin has often said it could be the band's last -- then it also carries with it some of Coldplay's essential faults. The lyrics are often vague at best, trite at worst ("Life goes on, it gets so heavy"). The wordless hooks, though so ideal for reaching audiences in non-English-speaking markets, start to feel manipulative; the songwriting workmanlike enough, behind the pristine production, that it's hard to imagine many successful covers. "Don't Let It Break Your Heart" may be inoffensive, but it's also utterly forgettable. Oh yeah, and three of the tracks are essentially just extended introductions to the songs after them. In a time of diminishing expectations, Coldplay fulfill every one.

Coldplay are too good at a certain mode of big-tent uplift to hate them anymore, and yet, for all of their famous self-deprecation, one of Martin's recent comments rings a little too true. "How I really feel is, we don't make it for us," he has said. "We don't make it to sell millions, we don't make it to answer critics. We make it so that if you're in a store and you buy our record, or a ticket -- like a good sandwich -- you go, 'That's good!' That's all it is." And maybe that's why it is so hard to get worked up over Coldplay's shiny blandness: They aren't even holding themselves to a higher standard than Jared from Subway.

Marc Hogan is a Des Moines, Iowa-based freelance writer whose work has appeared in SPIN, Pitchfork, eMusic, Playboy.com, the Village Voice and Paste magazine, among other publications.