Is Will Ferrell the new Mark Twain?

As he's honored at the Kennedy Center, the comic reminds us he's a great satirist as well as our favorite goofball 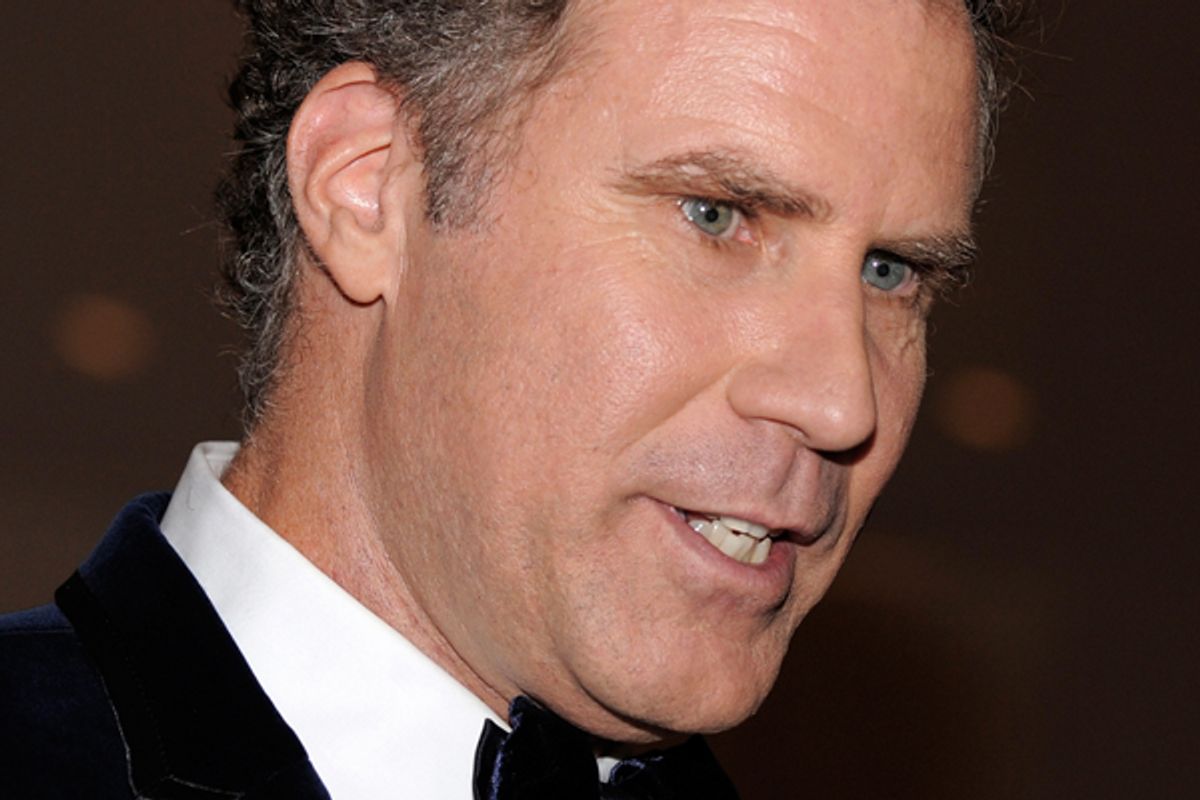 Will Ferrell arrives at the Kennedy Center, where he was honored with the 14th Annual Mark Twain Prize for American Humor, on Sunday. (Reuters/Mike Theiler)
--

What's a guy like Megamind doing in a place like the Kennedy Center? On Sunday evening, Will Ferrell -- the taller of the Butabi brothers, the legendary Ron Burgundy and the tenant of the world's most recklessly abusive toddler landlord -- received the nation's highest honor of American humor, the Mark Twain Prize. The show will air on PBS this coming Sunday, and features tributes to Ferrell from comic luminaries Jack Black and Ben Stiller.

So how did Frank the Tank find himself on a list that includes such legends like Richard Pryor, Bob Newhart, Lily Tomlin and George Carlin? Well, it helps that the award itself is relatively young. The Kennedy Center has only been doling them out since 1998, and it's shown a marked preference for contemporary humor. You won't find Will Rogers, Mae West or Lenny Bruce on the still relatively short list of honorees. Instead, it looks more like a "Saturday Night Live" reunion, with recent winners Billy Crystal, Lorne Michaels and, last year, Tina Fey. But has a guy who once made a bit out of peeing himself at the MTV Awards truly had "an impact on American society in ways similar to the distinguished 19th century novelist and essayist best known as Mark Twain"? Is the guy who rocked a jazz flute solo in "Anchorman: The Legend of Ron Burgundy" really "a fearless observer of society" with an "uncompromising perspective of social injustice and personal folly"? You betcha.

Like Fey, Ferrell has such an affable, clean-living persona it's easy to be lulled into believing he isn't transgressive. But just because a guy doesn't set himself on fire doesn't mean he isn't kicking all kinds of comedy butt. And Ferrell, for all his lummoxy, doofus roles, his apparent lack of interest in dying in a hotel room and his breezy insistence that "I have no interesting demons," has nevertheless managed to become one of the most demonically necessary forces in American comedy.

You could begin and end the argument for Will Ferrell with Funny or Die and win hands down. Founded with Adam McCay in 2006 and instantly viral thanks to McCay's foulmouthed daughter Pearl, Funny or Die has managed not just to get every big-league actor in Hollywood – and even a former president -- clamoring to do one of its mini epics, it's also helped launch the careers of stars like Demetri Martin and Zach Galifianakis. Try to imagine a world without "Between Two Ferns." It's a sad place, isn't it? But Funny or Die has also illuminated another side of Ferrell: the goofball who happens to have an agenda. Funny or Die has showcased videos for charitable causes and brought together the Hollywood community in support of Obama  and against Proposition 8. It's been, in the very Mark Twainest sense of the notion, a highly effective means of raising consciousness through humor.

And it's worth remembering that Ferrell spent much of the past decade deftly skewering George W. Bush, both in his dumb-as-a-stump portrayals on "Saturday Night Live" and the Tony-nominated Broadway show he wrote and starred in, "You're Welcome, America." His Bush didn't change the course of electoral history, but his performances, both clueless and chilling, made clear Ferrell's fierce aptitude for showing the devastating price of unchecked idiocy and hubris.

Ferrell may be utterly shameless, the guy who will drop his pants if there's a laugh to be had. But he's also proven, in his roles in "Stranger Than Fiction" and "Everything Must Go," to be a guy who can sneak up on you and break your heart. He's given us Buddy the Elf, a performance that stands, along with Amy Adams' luminous Gisele in "Enchanted," as one of the most fiercely unself-conscious, boldly unwinking turns in movie history. It's Ferrell's thoroughly balls-out commitment to his roles – whether he's a blue-skulled super-villain in "Megamind," Abraham Lincoln in "Drunk History" or a loose cannon boss on "The Office," that makes him a force to be reckoned with. He's a guy working so hard to make you laugh that he can make you laugh so hard you don't notice how hard he's working.

Conan O'Brien, who had Ferrell as his last guest on his ill-fated "Tonight Show," said Sunday night that "Will magnifies and celebrates his flaws, just to entertain us." That's a rare gift – because a talent for playing characters so often stuffed with ego requires a performer who can set aside his own. Ferrell never tries to look cool; he never puts his dignity in front of the path of a possible chuckle.

In his acceptance speech, after he did a bit involving dropping and shattering his big prize, Ferrell thanked the Kennedy Center for recognizing "comedy as what it truly is, an art form." He's right. And the art of comedy isn't just in the perfectly crafted quips of a writer like Twain, or the raw howls of a Lenny Bruce. There's genius in an overgrown elf, and a washed up race car driver. Maybe Ferrell doesn't have any demons. He doesn't need to, as long as, with every pratfall, he keeps exorcising ours. And that definitely calls for more cowbell.