Tunisia votes for the first time

Nine months after ousting their dictator, citizens turn out to the polls in record numbers 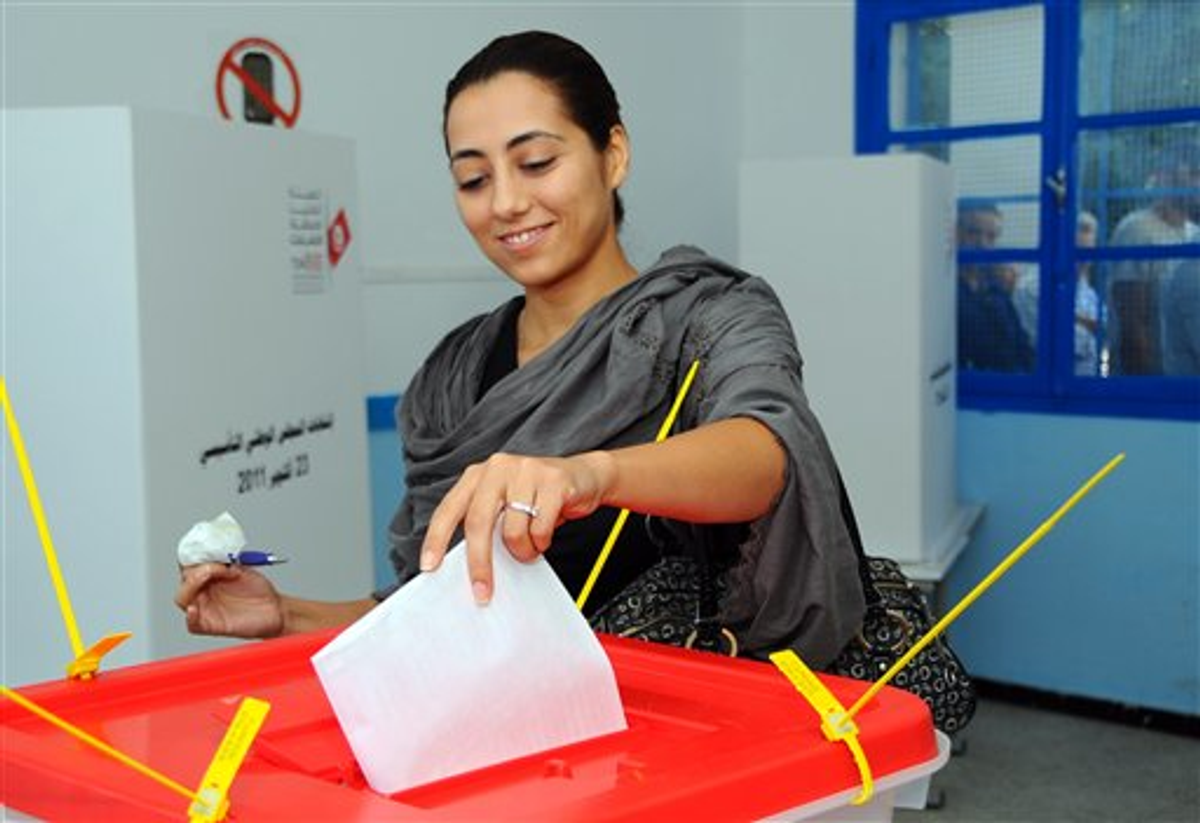 TUNIS, Tunisia -- Tunisians made history Sunday when they turned out in force to vote peacefully in their country's first true democratic elections, nine months after they ousted their decades-long dictator and in a process lauded by international observers.

The polls for the election of a 217-member constituent assembly tasked with writing a new constitution opened at 7 a.m., and at 4 p.m. Tunisia's official elections committee said voter turnout was close to 70 percent -- far higher than expected.

About 7 million of Tunisia's 10.4 million people are eligible to vote.

There was a festive atmosphere throughout the day in the capital, Tunis, where primary schools converted into polling stations received the streams of voters across the city and from all walks of life.

Young men waved Tunisia's red and white flag from the windows of honking cars on the capital's streets. Blue ink, administered at election booths to indicate a person had voted, stained the fingers of men and women, young and old alike.

"Whatever the result, I feel like I exist," a smiling Hamid Lofti, 35, said outside a polling station after he voted in central Tunis.

Despite deep divisions among the various political parties over Tunisia's future -- the most contentious being the debate between secularists and Islamists -- the election itself was a source of both national and regional pride for many Tunisians on Sunday.

This tiny North African nation was the first in the Arab world to topple its dictator, Zine El Abidine Ben Ali, through a popular revolt in January. Now, it is the first to hold successful democratic elections with zero violence and only minor voting violations, observers said.

"I feel so proud to be Tunisian," said 22-year-old Qais Jelassi, who participated in the protests in Tunis that forced Ben Ali from power. "I never thought that this [free elections] would be the result of our demonstrations."

Indeed, the process was smooth, transparent and organized, voters said. Nearly 50,000 elections workers, including 5,000 trained and accredited observers, were deployed to polling booths across the country.

Special stations were opened to accommodate citizens who had not yet registered to vote -- but who could still register on the day of the election.

A text message service enabled voters to send their national identification numbers to a central hotline, which would reply with the name and address of their designated polling station.

"I thought I was registered in one place but they sent me to another voting station. It was frustrating,"said 42-year-old Olfa Bormeya, an unveiled, female lawyer in an upper-middle class neighborhood in Tunis.

Voters at at least four other polling stations in the city, however, voiced almost no other complaints.

Even in Tunis's most impoverished and densely-populated neighborhood, Hay al-Tadamon, voters were cheerful and crowded the election halls well into the evening.

Polls were slated to close at 7 p.m., and at 6 p.m., as dark fell over the slum, local stations were still buzzing with activity.

"I voted for the first time, and no one told me who to vote for. It was of my own free will,"said 54-year-old Tounis Bouzazi, a veiled resident of Hay al-Tadamon.

She voted for Karama, an independent list of candidates, dismissing the popular Islamist party, Ennahda, as two-faced.

Ennahda, formed from a grassroots Islamic organization that was banned under Ben Ali, is the favorite to win Sunday's polls.

Its experience and organization has won it followers across Tunisia, and particularly for its populist campaigns in the countryside.

Ennahda leaders insist they are not interested in turning Tunisia into a strict Islamic emirate, but secular Tunisians are worried the party will roll back the country's progressive legislation regarding the rights of women and the liberal style of Islam that is practiced here.

Ennahda's most likely contester for the most seats in the assembly, the secular Progressive Democratic Party (PDP), was polling at just 15 percent in the days before the election.

"If Ennahda wins, I would like to see sharia [Islamic] law," said Tawfiq bin Mohammed bin Abdullah, a 62-year-old Ennahda supporter."There are many women in Tunisia who do not know true Islam. Ennahda will not impose, but it will explain what it is in the Koran. And hopefully they will come to the true Islam."

Others are drawn to Ennahda not only for its religious message, but for its longer history as a serious opposition group.

"Their objective is to help people get a better life."