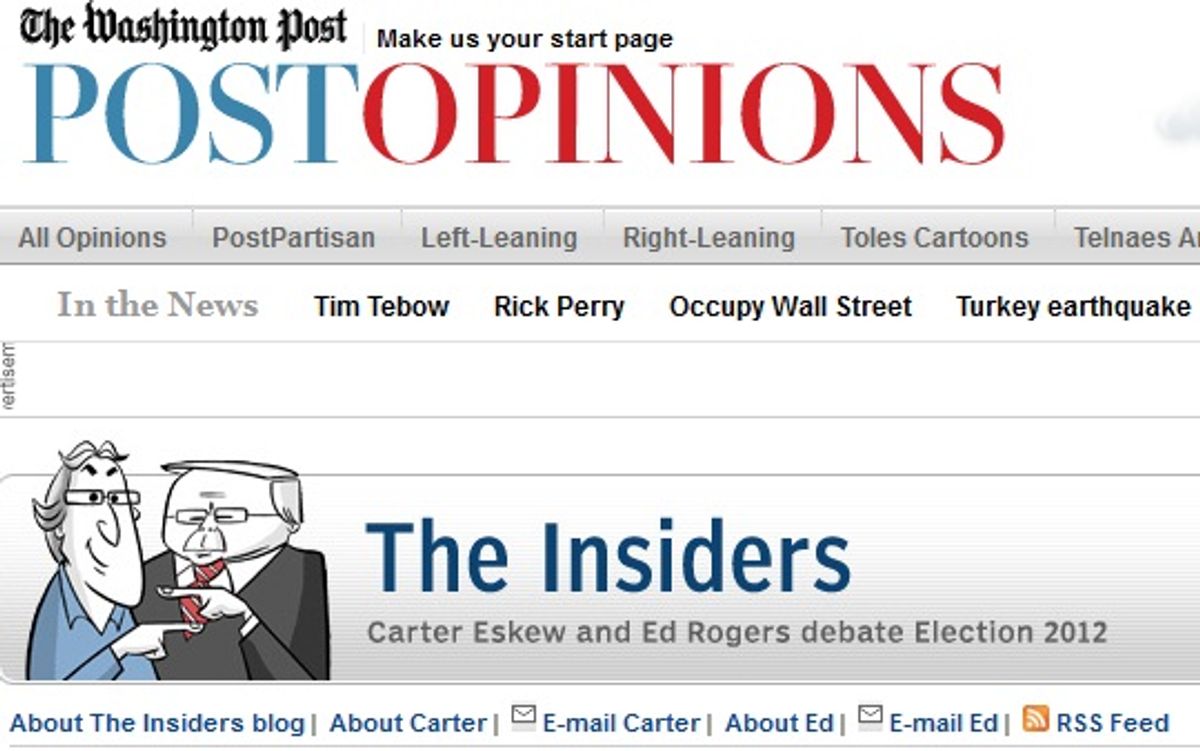 Carter Eskew and Ed Rogers are just like The Odd Couple, except there is actually scarcely any difference between them (Washington Post)
--

Thrilling news, political junkies: The Washington Post has just launched a new campaign blog! It's called "The Insiders," and it's written by campaign strategist Ed Rogers, vice chairman and co-founder of lobbying firm Barbour Griffith & Rogers, and former Al Gore strategist Carter Eskew, managing director of the communications firm Glover Park Group. They're both longtime Washington fixtures with lengthy and similar résumés of corporate and campaign work, but one of them is a Democrat and one of them is a Republican so their debates will be very enlightening and informative.

The Post believes strongly that it is the job of an opinion section of a major newspaper to provide a forum for both sides of major issues: The right-wing establishment side and the center-left establishment side. Eskew, who badly mismanaged Al Gore's messaging and then worked to help Joe Lieberman defeat Eskew's Philips Exeter Academy classmate Ned Lamont, is the perfect Post Democrat. Rogers, chairman of one of D.C.'s most powerful and blithely amoral lobbying firms, is the perfect Post Republican. What a great team!

Two professional strategists for powerful communications and lobbying firms make the best political analysts, so long as you privilege access and proximity to power above all else, which the Washington Post obviously does. And best of all, unlike people with "principles" or "deeply held convictions," these two won't actually argue with each other. Take it away, editorial page editor Fred Hiatt:

A statement from Fred Hiatt, editorial page editor: "Ed and Carter may not agree on much, but they do agree that shouting matches are not the most useful form of political analysis. I expect their exchanges will be original, perceptive and a lot of fun to read."

You know what? I'm guessing these two guys actually do agree on much. Maybe one of them prefers The Palm to Cafe Milano, but these are two educated white guys of the same social sphere and class working in the exact same industry, their differences are largely inconsequential.

Every single post authored by these gentlemen should be followed by about a thousands words of disclosure, considering the groups and industries these men have done work for, but it looks so far like the fact that these two are both paid to hold and repeat specific opinions to advance the interests of their clients will not be remarked upon.