Book excerpt: With Liberty and Justice for Some

How Ford's treatment of Nixon launched a new era of elite immunity -- and pervasive, limitless corruption 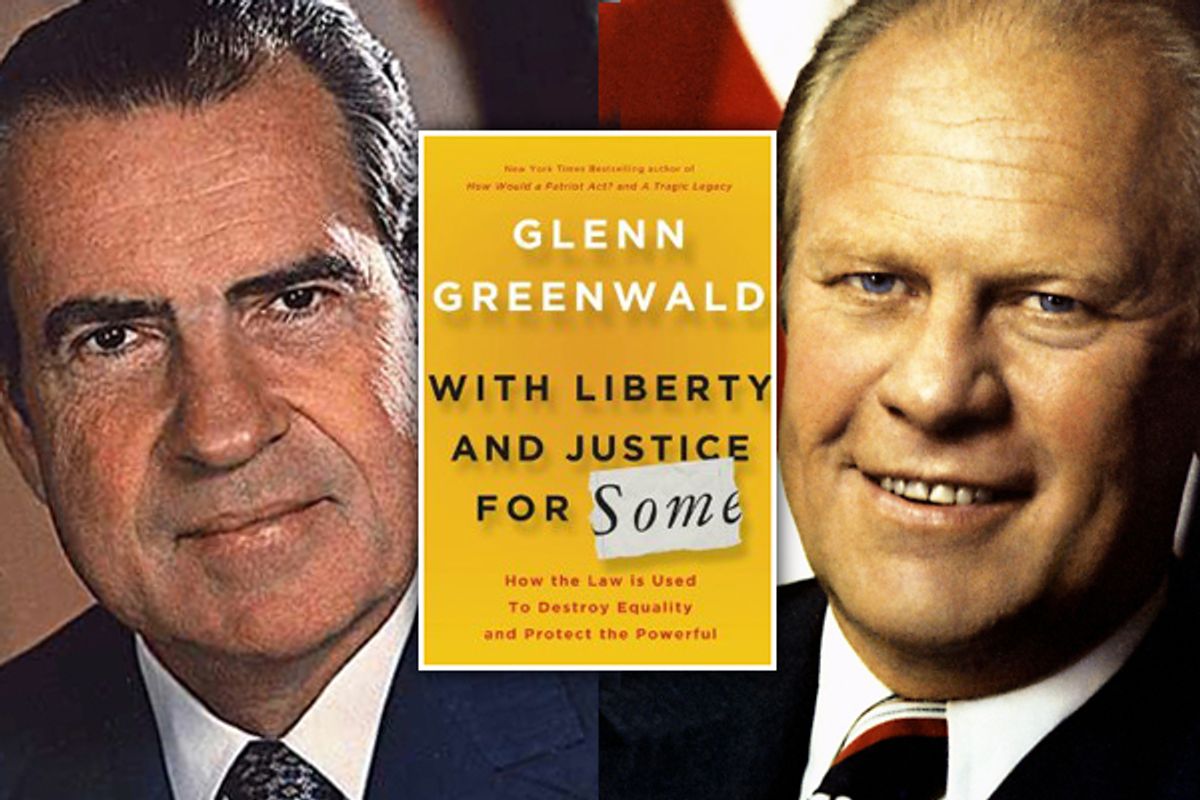 Following is an excerpt from Glenn Greenwald's new book, With Liberty and Justice for Some: How Law is Used to Destroy Equality and Protect the Powerful; this is from the section of the book examining how the Ford pardon of Nixon entrenched the corrupt precepts of modern elite immunity:

As multiple episodes demonstrate, a belief that elite immunity is both necessary and justified became the prevailing ethos in the nation’s most influential circles. In countless instances over recent years, prominent political and media figures have insisted that serious crimes by the most powerful should be overlooked— either in the name of the common good, or in the name of a warped conception of fairness according to which those with the greatest power are the most entitled to deference and understanding.

This is what makes the contemporary form of American lawlessness new and unprecedented. It is now perfectly common, and perfectly acceptable, to openly advocate elite immunity. And this advocacy has had its intended effect: the United States has become a nation that does not apply the rule of law to its elite class, which is another way of saying that the United States does not apply the rule of law. . . .

If the threat of real punishment for criminality is removed, for many rational people there will be little incentive to abide by the law and much incentive to break it. Alexander Hamilton, in Federalist 15, explained why.

It is essential to the idea of a law, that it be attended with a sanction; or, in other words, a penalty or punishment for disobedience. If there be no penalty annexed to disobedience, the resolutions or commands which pretend to be laws will, in fact, amount to nothing more than advice or recommendation.

For the nation’s most powerful elites, the law has indeed been whittled down to “nothing more than advice or recommendation.” Although there have been episodes of unpunished elite malfeasance throughout American history, the explicit, systematic embrace of the notion that such malfeasance should be shielded from legal consequences begins with the Watergate scandal— one of the clearest cases of widespread, deliberate criminality at the highest level of the U.S. government.

By the scandal’s conclusion, few contested that not only Nixon’s top aides but Nixon himself had committed serious felonies— either in authorizing the break-in and related illegalities, or in obstructing the ensuing investigation. Nonetheless, Nixon was ultimately shielded from all legal consequences thanks to the pardon granted by his handpicked vice president, Gerald Ford— who, it was widely believed, secured his appointment by agreeing to protect Nixon from prosecution.

Ford first explained his decision to pardon Nixon in a speech to the nation on September 8, 1974. The new president began by paying lip service to the rule of law: “I deeply believe in equal justice for all Americans, what ever their station or former station. The law, whether human or divine, is no respecter of persons; but”— and here he tacked on a newly concocted amendment designed to gut that phrase’s meaning—“the law is a respecter of reality.” Ford then proceeded to recite what have by now become the standard clichés our political class uses to justify immunity. Watergate, he intoned,

is an American tragedy in which we all have played a part. It could go on and on and on, or someone must write the end to it. I have concluded that only I can do that, and if I can, I must. . . .

The facts, as I see them, are that a former President of the United States, instead of enjoying equal treatment with any other citizen accused of violating the law, would be cruelly and excessively penalized either in preserving the presumption of his innocence or in obtaining a speedy determination of his guilt in order to repay a legal debt to society.

During this long period of delay and potential litigation, ugly passions would again be aroused. And our people would again be polarized in their opinions. And the credibility of our free institutions of government would again be challenged at home and abroad. . . .

Remarkably, Ford explicitly pointed to Nixon’s lofty status as a reason to exempt him from the accountability applied to ordinary Americans— a complete reversal and rejection of the central covenant of the American founding. Ford’s signature line—“Our long national nightmare is over”— put a heroic spin on the betrayal of the rule of law: we end the “nightmare” of high-level criminality by sweeping it under the rug, protecting the wrongdoers, and pretending their crimes never happened.

Upon Ford’s death in December 2006, prominent figures rushed forth to consecrate his pardon of Nixon as an act of great nobility, magnanimity, and self- sacrifice, and thus to glorify its underlying premises. Leading the charge, not surprisingly, was Dick Cheney, Ford’s former chief of staff and the then-vice president. By 2006, Cheney himself had been accused of involvement in a wide variety of illegal acts, from establishing a worldwide torture regime and spying on Americans without warrants to outing a covert CIA agent and obstructing the resulting investigation.

Cheney’s own interests were thus clearly served by exploiting Ford’s death to bolster the propagandistic notion that elite immunity is dispensed not for the benefit of the powerful but rather in patriotic ser vice of the common good. At Ford’s funeral, Cheney eulogized his former boss by heralding the pardon as an act of national salvation. . . .

In fairness to Dick Cheney, we heard the same message from others, almost note for note. The Washington Post’s David Broder— the so-called dean of the Washington press corps— spoke for many journalists, past and present, when asked what would have happened had Nixon not been immunized.

My guess is that there would have been strong public pressure for prosecution of Richard Nixon, since several of his White House associates were already facing criminal charges. A lengthy trial would have been a difficult ordeal for the country, something President Ford wanted to spare Americans.

The actual beneficiary of the pardon, of course, was not “Americans” but Richard Nixon. Thanks to Ford’s act, Nixon himself was shielded from the kind of punishment that, as a “law-and-order" Republican, he had devoted his career to imposing on ordinary Americans when they broke the law, no matter how petty the offense. Yet this grant of immunity to the nation’s most powerful figure was endlessly cast as a generous gift to the American public, which—we were repeatedly told— had been spared the agony, acrimony, and shame of seeing their leader held accountable for his crimes as any other citizen would be.

The Nixon pardon, and the way it was sold to the country, became the template for justifying elite immunity. Nowadays, with only rare exceptions, each time top members of the nation’s political class are caught committing a crime, the same reasons are hauled out to get them off the hook. Prosecuting public officials mires us in a “divisive” past when we should be looking forward. It is wrong to “criminalize policy disputes”— meaning crimes committed with the use of political power. Political elites who commit crimes in carrying out their duties are “well-intentioned” and so do not deserve to be treated as if they were common criminals; moreover, politicians who are forced out of office and have their reputations damaged already “suffer enough.” To prosecute them would only engender a cycle of retribution. Political harmony thus trumps the need to enforce the rule of law.

Of course, all criminal prosecutions are, by definition, exercises in looking to the past rather than the future. All prosecutions impose substantial burdens on the accused, cost enormous amounts of time and money to resolve, and are plagued by numerous imperfections. The nation always faces pressing challenges and urgent problems from which headline-grabbing prosecutions will distract attention. All individuals accused of serious crimes suffer in multiple ways long before—and completely independent of— any actual punishment. And while it is true that criminal proceedings involving politicians who commit crimes in office inevitably engender partisan divisions and undermine political harmony, citing these circumstances as just cause for legal immunity is, by definition, creating a license to break the law. . . .

That dynamic expresses the underlying motive of the political and media classes’ general defense of elite immunity: by protecting the lawbreaking license for other powerful individuals, they strengthen a custom of which they might avail themselves if they too break the law and get caught. It is class-based, self- interested advocacy. That is why belief in this prerogative and the devotion to protecting it transcend political ideology, partisan affiliation, the supposed wall between political and media figures, and every other pretense of division within elite classes. It is in the interest of every member of the privileged political and financial class, regardless of role or position, to maintain the vitality of this immunity. And what we have seen over the last decade is the inevitable by-product of elite immunity: pervasive, limitless elite corruption and criminality.

For more on the book, see here.