The political, economic and moral implications of this military disaster could haunt us for years to come 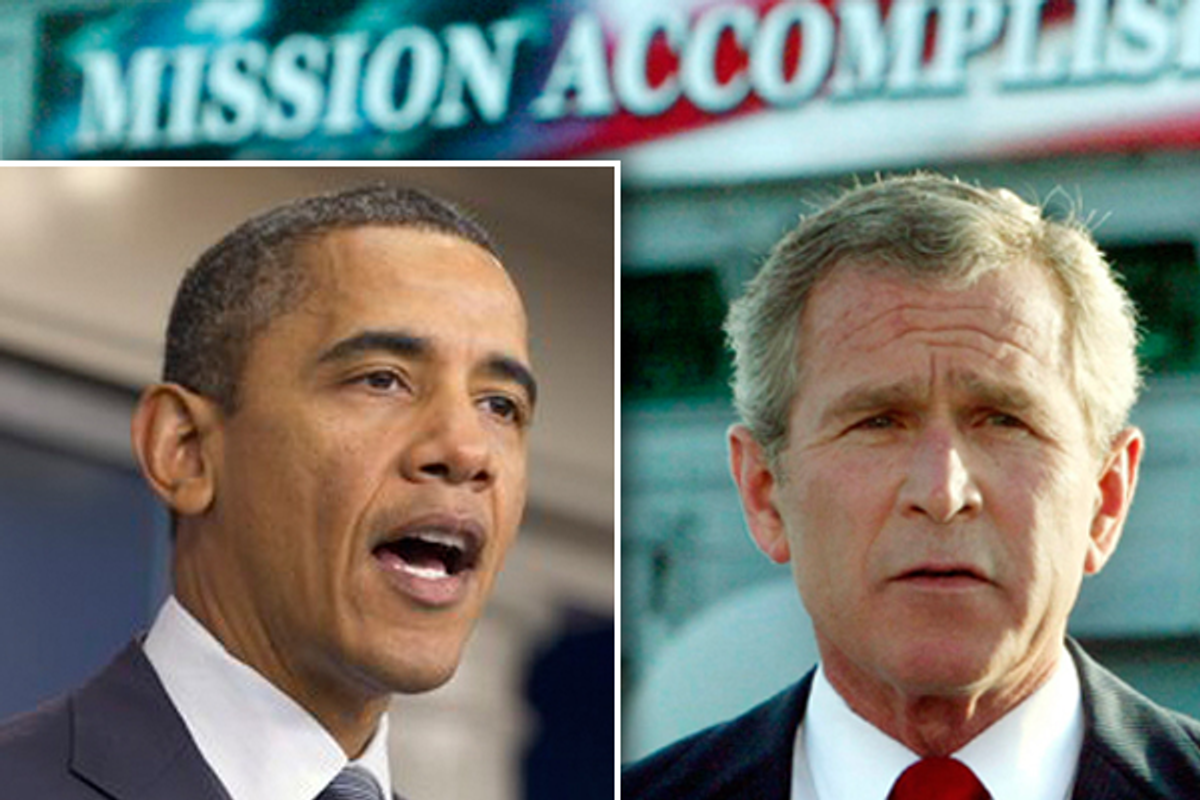 If ever there were a complete foreign policy disaster, it has been the Iraq war. Most foreign policy failures are imperfect idiocy. At least elements of the failed policy made sense at the time. By invading Iraq, the U.S. carried idiocy to perfection. The Iraq war was a catastrophe for the United States in every way—strategic, economic, political and moral.

Strategic. From the end of the Gulf War in February 1991 to the beginning of the Iraq war in March 2003, the U.S. pursued a policy of “dual containment” of Iran and Iraq. Though far less costly than the invasion of Iraq would prove to be, this dual containment policy was expensive, in part because of the cost of U.S. occupation of part of Iraq and frequent bombing of the territory that Saddam still held.

There is much we have yet to be learned about the deliberations of the George W. Bush administration, but it is clear that one of the strategic goals of the invasion of Iraq was to replace the policy of dual containment with a policy of containment of Iran. Iran, the enemy of both Israel and America’s Sunni Arab protectorates like Saudi Arabia, would be encircled by permanent, well-garrisoned U.S. military bases in both Iraq and Afghanistan. The Iraqi people, the neoconservative policymakers of the Bush administration seem to have hoped, would welcome Americans as liberators and allow their country to be turned into another South Korea or Okinawa—a permanent staging ground for American hegemony in the Middle East.

Instead, eight years after the war began, America’s military is so loathed in Iraq that it is being expelled by the Iraqi government. America’s soldiers are leaving because Iraq refused to negotiate a status of forces agreement, which exempts American soldiers from local laws. These agreements are the norm in other countries where the U.S. has stationed large numbers of troops, including Japan and South Korea. They trust that the American military will punish crimes by American soldiers committed in its country. The fact that Iraq refuses to exempt U.S. soldiers from prosecution under its own laws demonstrates the extent to which the misconduct of the U.S. military and its mercenary contractors alienated the Iraqi population.

In addition to refusing to host permanent American bases, the Iraqi government is also refusing to play its assigned role as strategic counter-balance to Iran. Indeed, under Prime Minister Nouri al-Maliki, the new democratic Iraq has aligned itself with Iran and supports Syria’s autocratic regime against Arab spring protesters. One wonders what the architects of the Iraq war would have said, if told by a visitor from the future back in 2003 that as a result of the U.S. invasion of Iraq, Iran would have a new ally in the Middle East. Or that democratic Iraq’s new friend, the Syrian regime, would crush protesters claiming that they are inspired by ... al-Qaida!

Economic. Remember the Bush administration’s assertions that the Iraq war would pay for itself? On March 27, 2003, Deputy Secretary of Defense Paul Wolfowitz told the House Appropriations Committee that Iraqi oil would pay for the costs of the war: “We’re dealing with a country that can really finance its own reconstruction and relatively soon.” In a press conference on Oct. 2, 2003, Defense Secretary Donald Rumsfeld predicted: “The bulk of the funds for Iraq’s reconstruction will come from Iraqis—from oil revenues, recovered assets, international trade, direct foreign investment—as well as some contributions we’ve already received and hoped to receive from the international community.”

This was yet another unforced error by the neoconservatives, the most blundering foreign policy elite in American history. Apart from the more than 4,000 Americans killed, the more than 30,000 Americans maimed, and the hundreds of thousands of Iraqis who lost their lives or have been wounded, a conservative estimate of the costs of the war puts it at $1.2 trillion, although Joseph Stiglitz and Linda Bilmes estimate that the long-term costs, including medical treatment for veterans, may exceed $2 trillion. David Leonhardt of the New York Times put this into perspective, back in 2007:

For starters, $1.2 trillion would pay for an unprecedented public health campaign — a doubling of cancer research funding, treatment for every American whose diabetes or heart disease is now going unmanaged and a global immunization campaign to save millions of children’s lives.

Combined, the cost of running those programs for a decade wouldn’t use up even half our money pot. So we could then turn to poverty and education, starting with universal preschool for every 3- and 4-year-old child across the country. The city of New Orleans could also receive a huge increase in reconstruction funds.

Political. The domestic political costs of the Iraq war are less obvious than the economic costs, but they may prove to be more damaging in the long run.

During the Vietnam War, the disjuncture between the statements of the Johnson and Nixon administrations about the purposes and progress of the war and the disconcerting facts gave rise to the phrase “the credibility gap.” Revelations about American skulduggery from Cuba to Chile, combined with the unmasking of Nixon’s criminality during the Watergate scandal, created a profound distrust of their own government by a generation of Americans. Paranoia about government permeated popular culture, in which the federal government was identified with rogue intelligence agencies and secret military operations.

Public trust in America’s policymakers, among liberals as well as conservatives, was restored to a degree by the Gulf War and the Kosovo War. Whether one agreed with them or not, the rationales of these wars were clear: reversing Saddam’s attempted conquest of Kuwait, a violation of the post-1945 norm against conquest and annexation, and bringing an end to the violence that accompanied the disintegration of Yugoslavia. For that matter, the Korean and Vietnam wars had been proxy wars in the Cold War. The first turned into a stalemate and the second into a debacle, but in spite of incidental lies and exaggerations, the strategic logic that motivated the U.S. was clear at the time.

But the U.S. invasion of Iraq created a credibility gap that dwarfed that of the Vietnam era. The U.S. attack on Afghanistan made sense; after all, the Taliban regime had supported al-Qaida, which was behind the 9/11 attacks on the U.S. But why was the Bush administration in 2003 pulling troops out of Afghanistan to invade Iraq? Administration claims that Saddam had links with al-Qaida were never credible, and the claim that he was on the verge of acquiring nuclear weapons and other weapons of mass destruction was quickly refuted after his regime fell.

Because the pretexts for the war were so obviously fraudulent, Americans and others around the world were free to speculate about the war’s true purposes. Was it to protect Israel from an enemy? To create a staging area for attacks on Iran? To turn Iraqi oil over to American oil companies? Was George W. Bush attempting to avenge Saddam Hussein’s alleged attempt to assassinate his father?

Whatever its cause or causes, the Iraq war may have convinced a new generation of Americans that their leaders are liars who use pretexts to justify wars whose true purposes are concealed from the American people. This perception is deeply corrosive of American democracy.

Moral. Finally, the Iraq war has been a moral disaster for the United States. The collapse of communism helped to rehabilitate America’s image in the world, and with few exceptions the U.S. was viewed abroad as leading international coalitions in just causes—the liberation of Kuwait, the suppression of ethnic cleansing in the Balkans. But the seemingly senseless Iraq war horrified most people in other countries, including America’s closest allies like Britain, whose government cooperated with the U.S. in spite of the opposition of much of the British public.

The photos depicting the sadistic tortures inflicted on Iraqi prisoners by American soldiers at Abu Ghraib have not only stained America’s reputation as a force for good in the world, but also joined the graphic catalog of modern horrors. It was bad enough that the “ticking bomb” scenario was used to justify the routine practice of torture by the Bush administration in the case of suspected al-Qaida operatives. This was a predictable if deplorable reaction to 9/11. But the victims of torture in Abu Ghraib were mere insurgents who had nothing to do with planning or implementing terrorist attacks on America. In torturing prisoners in Iraq, in kicking down doors and terrorizing civilians, and in gunning down civilians at checkpoints the U.S. military was acting like a premodern colonial power.

The Blackwater Massacre is one of the reasons that Americans are being kicked out of Iraq. On Sept. 16, 2007, mercenaries hired by the Blackwater corporation to provide security for U.S. military and diplomatic personnel gunned down more than a dozen Iraqis, including women and children, in Baghdad’s Nisour Square, as they fired at a car falsely suspected of being a threat. Citing the Blackwater Massacre, the Iraqi government refused to negotiate a status of forces agreement with the Bush administration and the successor Obama administration.

If any good comes of the Iraq war, it will come in the form of an Iraq syndrome, like the Vietnam syndrome that made Americans wary of large-scale military intervention abroad from the fall of Saigon in 1975 until the Gulf War of 1990-91. The mantra then was “No more Vietnams.” That needs to be updated: “No more Iraqs.”