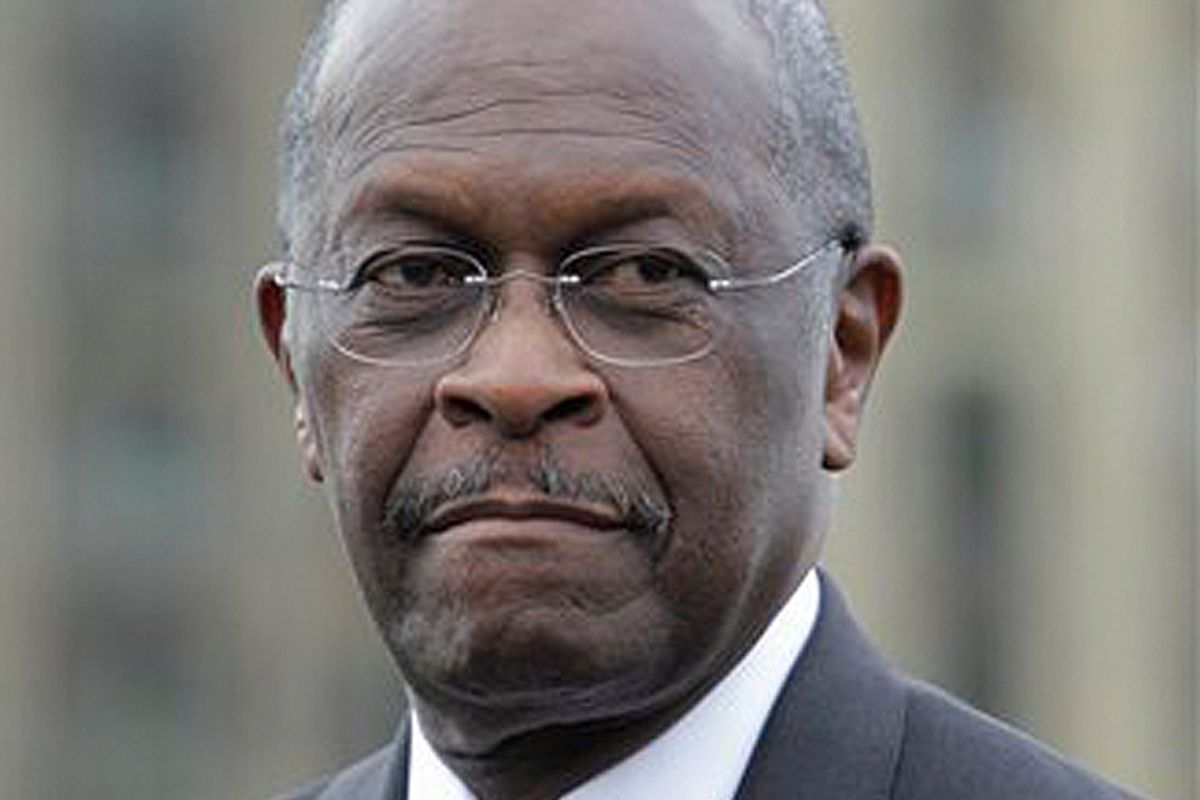 A new CBS News/New York Times poll finds Herman Cain hanging on to his lead in the national Republican presidential race -- and Rick Perry sliding all the way back to fifth place, with just six percent. The survey gives Cain a four-point edge over Mitt Romney, 25 to 21 percent, with Newt Gingrich (10 percent) a distant third and Ron Paul (8 percent) behind him.

On the surface, this may seem like encouraging news for Cain, who is coming off what was probably his roughest week as a candidate. The poll was conducted between last Wednesday and yesterday -- in other words, after the debate last Tuesday in which Cain struggled to formulate a coherent defense against his rivals' tag-team assault on his 9-9-9 tax plan and during a period in which Cain made news with an abortion gaffe and dealt with a previously unimaginable level of scrutiny and criticism from the political media and from conservative opinion-shapers.

But it's too soon to say this shows Cain has any real staying power. For one thing, we already saw something like this happen with him once before, when he surged to the front of the GOP pack back in late May and early June only to return to obscurity by the middle of the summer (at which point he apparently considered ending his campaign). Plus, it can take a while for the critical coverage and commentary that Cain is now facing to sink in and fully register in polls. Recall that the first survey released after Perry's most widely-panned debate performance on September 23 still put the Texan in first place, by seven points. The scrutiny on Cain is not letting up; he's currently in a war of words with Karl Rove, who has been questioning his seriousness as a candidate. So let's see how Cain is holding up when the next wave of data is released later this week and early next week.

That said, Cain does seem to have one powerful factor working in his favor: The many Republican voters who are (for now) resisting the supposed inevitability of Romney really don't have any obvious alternative. Perry was supposed to fill the default anti-Romney role when he entered the race; that he failed so epically to live up to his billing is the reason Cain has enjoyed an unexpected act these past few weeks. Perry is now scrambling to reassert himself as the main Romney alternative, but his sudden, inexplicable and repeated flirtations with birtherism may end up marginalizing him for good. Influential Republicans and conservative opinion-shapers are now beginning to distance themselves from Perry. For all his troubles this past week, Cain may still look good in the average conservative Republican's eye, at least compared to Perry -- and Gingrich, Paul, Rick Santorum, Michele Bachmann and Jon Huntsman, for that matter.

So even though he lacks an actual campaign organization and may be running only to enhance his celebrity, it's conceivable that Cain won't fade from the front of the pack quite as quickly now as he did back in June.