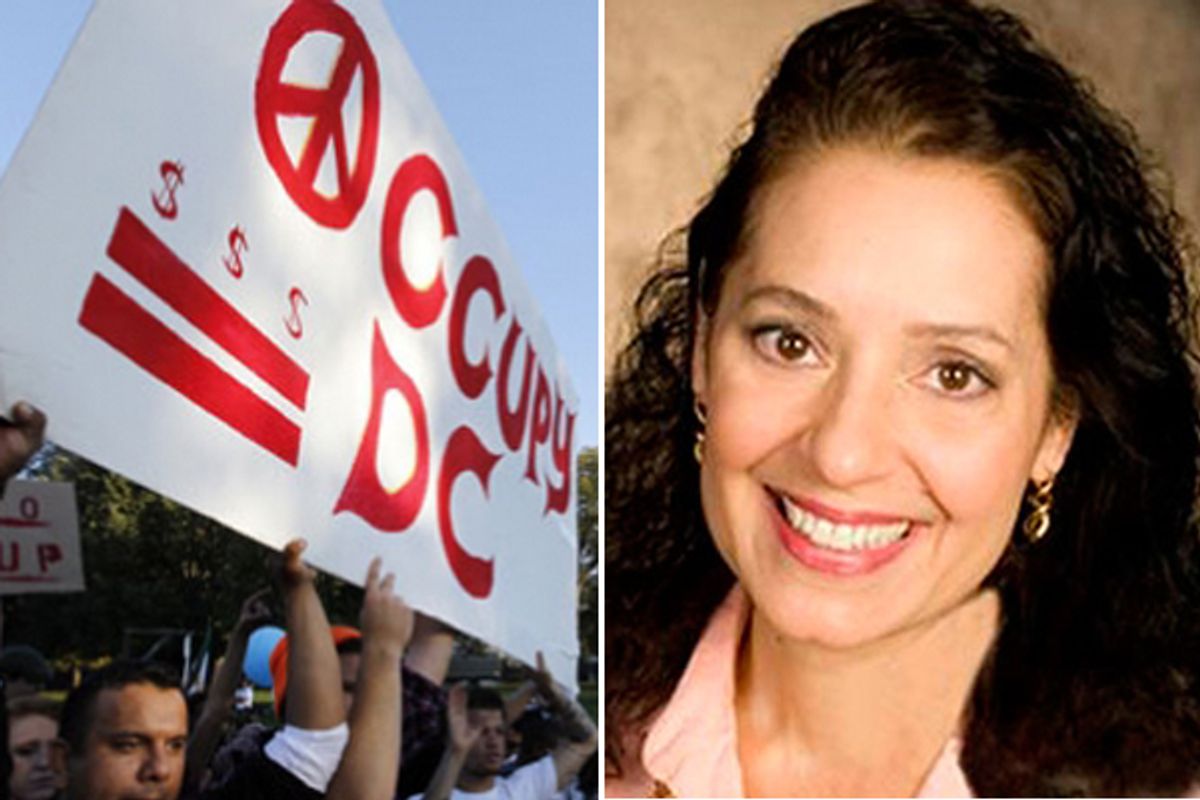 The timing could not have been worse for the latest in a series of controversies to hit the nation’s scandal-prone public radio network. But the fact that it was pledge week didn’t prevent NPR from caving in to conservative pressure and canceling its distribution of  “The World of Opera,” last Friday after right-wing bloggers indignantly reported that host Lisa Simeone had taken part in Occupy DC, a spin-off of the Occupy Wall Street movement, a protest against corporate greed that is spreading to cities nationwide. Earlier in the week, Simeone, an independent producer, was sacked from her other job as host of the public radio documentary series “Sound Print” for her political activities.

In justifying the actions, NPR spokeswoman Dana Davis Rehm said that it is a conflict of interest for a journalist associated with NPR to take a role in a political protest movement, ignoring the fact that Simeone is a freelancer and not an NPR employee, and a music host, not a journalist. Time magazine’s James Poniewozik  jested: “Public radio listeners! Have you long worried that your station was undermining capitalism through its broadcasts of the Ring Cycle? Tired of having your children brainwashed by the socialistic messages of La Traviata?”

For hundreds of listeners who flooded NPRs own blog and switchboard with messages of outrage over the weekend, however, it was no laughing matter. New York University journalism professor Jay Rosen said "NPR's solution to getting bullied on the playground every day is bring more lunch money so that all who threaten it can have some."

Many saw the incident as merely the latest chapter in the network’s drift to the right in an effort to appease Republican critics in Congress, which funds the Corporation for Public Broadcasting, a major source of NPR’s operating budget.

Critics also pointed out that the network has a double standard when it comes to the political speech of its hosts and reporters. While dropping Simeone for taking part in a protest rally, NPR routinely permits its own staffers to sound off on the issues that they report on.

In 2001 NPR host Scott Simon published a piece in the Wall Street Journal supporting American military interventions in the Middle East and likening antiwar protesters to “a Halloween parade.” NPR reporter Mara Liasson doubles as a commentator for Fox television where she lambasted congressmen on a fact-finding mission in Iraq before the U.S. invasion and called on them to resign. NPR’s Cokie Roberts regularly espouses her center-right opinions in handsomely paid corporate speeches on everything from healthcare reform to the minimum wage. What rule has Simeone violated that these NPR journalists have not?

The media watchdog group FAIR, (Fairness and Accuracy in Reporting) has criticized NPR for its excessive dependence on  “inside the Beltway” sources for its stories, with women only accounting for one in five. It also found that the network favors Republican over Democratic sources by a 3-to-1 margin, and routinely gives short shrift to protest movements like Occupy Wall Street.

In fairness, NPR has many fine reporters and its hour-long program blocks allow for a more in-depth and often intelligent coverage of issues than anywhere else on radio. There are still shows like “Fresh Air” with Terry Gross, where a diversity of voices can get an airing.

Furthermore, local community and public radio stations that carry NPR programs are often independent of the network and often broadcast a far wider and more gutsy range of voices than the Washington-produced newsmagazines. But while the fringes of the public radio world have frequently flourished, the center has shied away from controversy and silenced dissident voices.

The NPR of today takes few risks, producing a bland and corporatized news stream that genuflects to the powers that be, and in which the concerns of the poor, the disenfranchised and protesters of all stripes are marginalized. It is a place where some are allowed to speak freely on Fox News, but others who take up a placard and exercise their First Amendment right to protest social inequities will be thrown off the airwaves. That's not what public radio should be.