"Next thing I knew, we were tear-gassed" 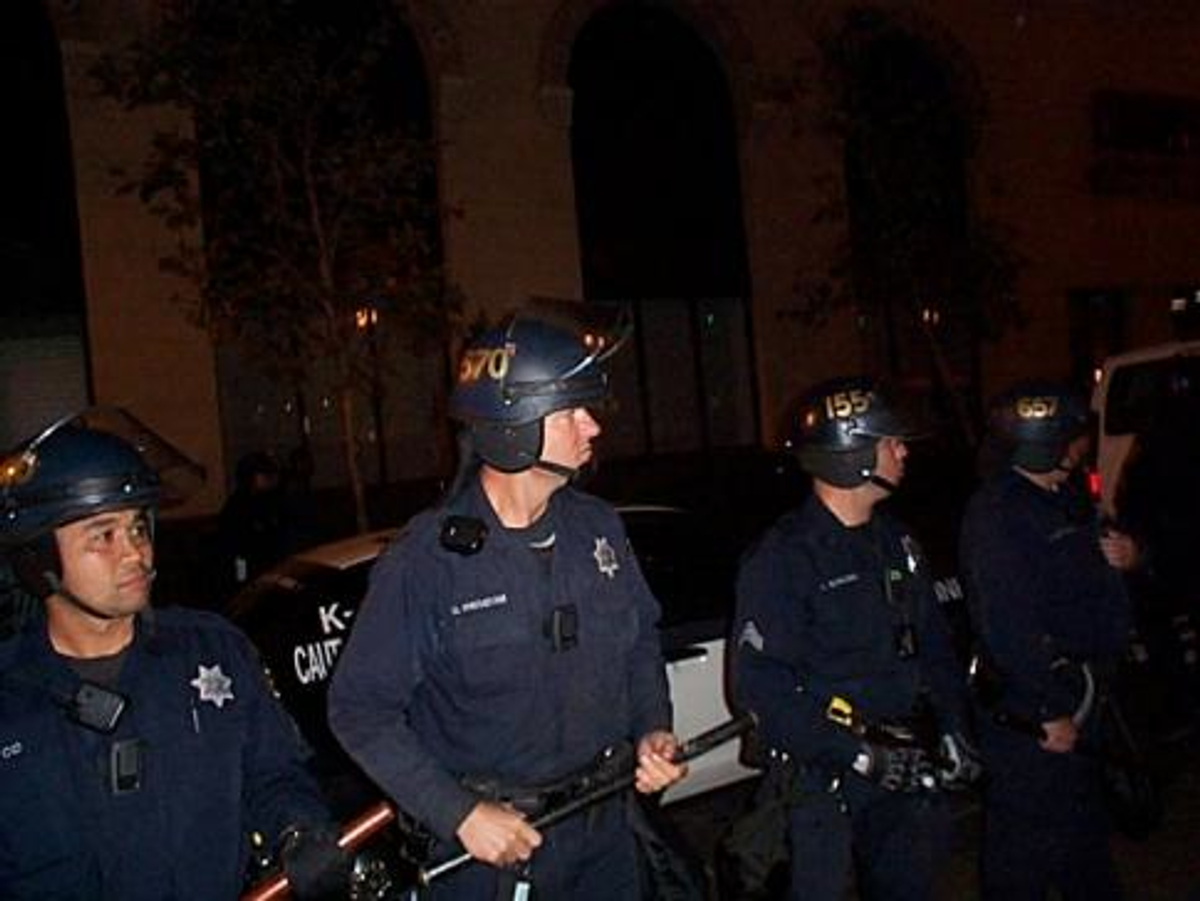 Today is a sad day in the city I love, Oakland. This morning at 2:45 I received a text message that a raid was imminent at the Occupy Oakland camp at Frank Ogawa Plaza. I had promised myself I would go any hour of the day. I believe in the importance of this story, I believe in the value of the independent press to document what goes on

For a long time, it seemed like nothing was going to happen. Apparently 10 to 20 police cars had driven by at one point. Various reports had them parked in various locations. None of us reporter people could find them, and neither could the Occupiers.

Just when I was going to go home, there were reports of a large gathering of police on the other end of Oakland, and that they would arrive soon. So sometime after 4 a.m., they did. And did. I was dumbfounded by the large number of police that arrived. I wanted to cry at the sight of it. This simply did not warrant the numbers I saw.

As I looked at the lineup, I saw anger and force in the faces of the officers. Earlier I'd spoken to another independent media guy, and he told me of getting close to the officers in San Francisco and filming their helmet numbers. I couldn't help myself, I wanted to capture that terrible look I saw.

About three-quarters of the way down officer No. 570, who is pictured in the top picture, the big tall one, started yelling at me to stand back. I paused for a bit, I wanted to see who he was. Next thing I knew, he rammed into me, pushing me on the ground. Watching my video, which doesn't capture the scope of the situation, or the amount of police, and it doesn't capture the anger, the meanness in this man's face.

Not wanting to be assaulted any more, I retreated. I found a commanding officer and told him what had happened. He went to get an officer to help me file a complaint. As I stood there, I noticed all the mainstream media trucks packing it in. I asked another officer if it was OK if I was there. She showed me where media was allowed to stand, so I joined a small group of independent media like myself.

Guess what, folks? Tear gas fucking sucks. It hurts, it stings, it is nothing you want to experience. Of course, this made all of us alternative press folks run away from the tear gas. After that, the police refused to let any of us go back into the camp. Maybe if you had a press badge, but we know what happened to most of those people.

So very early this morning, the citizens' right to peacefully assemble was halted. The media was tear-gassed, and then not allowed to cover the story.

Eventually, the remaining Occupiers assembled a few blocks away. I learned that about 50 to 60 Occupiers had been arrested. All reports say that they were peaceful. In fact, I'm about the only person I can verify being assaulted.

This was apparently more than just Oakland, it was a unit composed of several cities. I only noticed an officer from Fremont. Some think this implies the order came from farther up then Oakland. I left while things were still going on. Apparently the police had ripped all the tents up and thrown them into the street at one point. I wish I could tell you more.

I wish I could have taken more pictures, but when I fell, my camera broke. As I write this, I'm shaking, and a bit sick to my stomach. Maybe I shouldn't have gotten so close to the officers. But shouldn't the police be erring on the side of caution, rather than being revved up and ready for trouble?

I've spoken to many of the Occupy community, in Oakland as well as SF and Walnut Creek. An overwhelming amount of them are fine, well-spoken citizens, concerned that this country, this world is sharply headed in a very wrong direction. Sadly, tonight proved their point.

As I finish this, there are tears in my eyes, a scar on my heart and my soul. The hope I still have is the Occupiers I've met along the way. Yes, as I was leaving, there were a few of them throwing trash cans around. I think by that point, they had a right to be mad. I know I am, and I was just there as alternative press, trying to stay objective, even though the movement has been steadily winning me over. As I walked away and got into my car, I left as a full fledged Occupier.