"It's a good issue to keep alive," the GOP candidate says in a new interview 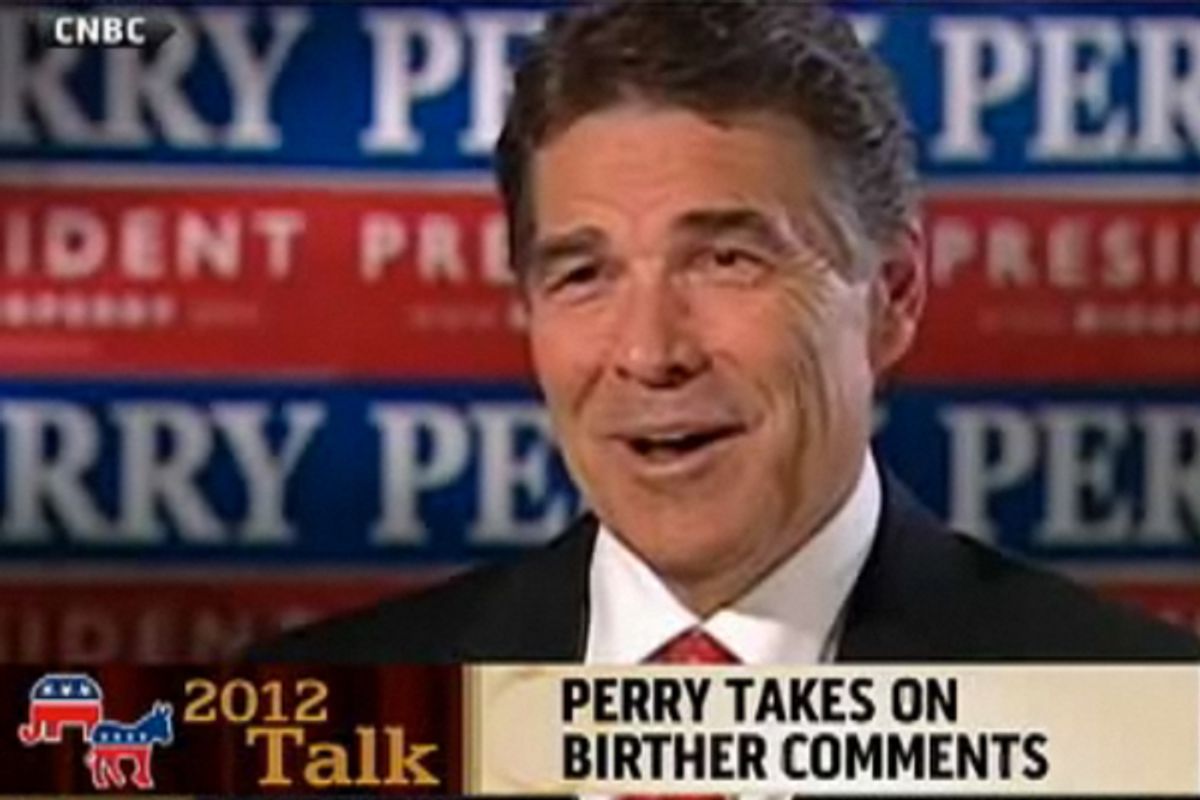 Today is supposed to mark Rick Perry's unofficial campaign relaunch, with a speech in South Carolina in which he will unveil a flat tax proposal -- finally, a Big Idea around which to build his White House effort. But you may not hear too much about that flat tax plan, because the Texas governor decided to kick off his big day by using a television interview to venture even further down the birther rabbit hole.

Perry, you probably recall, told Parade magazine over the weekend that he doesn't have a "definitive answer" about whether President Obama was born in the United States and suggested the long-form birth certificate Obama released back in April (a development that almost completely removed the birther issue from the public square) might be a forgery. Perry's willingness to reopen the issue baffled most political observers and drew rebukes from several leading Republicans.

But apparently he thinks it's a winning strategy. "It's a good issue to keep alive," Perry told CNBC's John Harwood in a new interview, excerpts of which aired on MSNBC's "Morning Joe" today. "It's fun to poke at him." In one of the clips that ran, Harwood tells Perry that "it sounds like you have some doubt" about Obama's birth status. Perry replies:

"Well, look, I haven't seen his grades. My grades ended up on the front page of the newspaper. So if we're going to show stuff, you know, let's show stuff. But look, that's all a distraction. I mean, I get it. I'm really not worried about the president's birth certificate. It's fun to poke at him a little bit and say, 'Hey, how about -- let's see your grades and your birth certificate."

Harwood talked about the interview on "Morning Joe," saying that he presented Perry with several opportunities to clearly state that he has no doubts about Obama's birth status, but that the candidate was coy each time. "I gave him a chance to say, 'Look, are you just joking about this? Or are you serious?' And he kept coming back to say, 'I don’t have a clue, I don’t know where, I don’t know what’s on the birth certificate,'" Harwood said.

It's really difficult to imagine how this will help Perry, even within the Obama-phobic Republican Party. Harwood suggested it might be one way that Perry hopes to prove he's more in touch with the GOP base than Mitt Romney, noting that "I prefaced a question by saying, 'You know, Mitt Romney calls this a closed question. How about you?"

But Romney has many vulnerabilities with the GOP base that Perry could try to exploit. By dabbling in birtherism, he risks being called out by influential conservative opinion leaders -- people whose opinions tend to trickle down to rank-and-file GOP voters. In the wake of the Parade interview, Karl Rove used his Fox News platform to say that Perry was associating himself with a "nutty" view and was damaging his candidacy. "There’s a simple answer: Yes, he was born in the United States. And yes, he is eligible to serve," Rove said. "And don’t associate yourself with this nutty fringe group."

Granted, Rove and Perry have a history, so these comments may not be very surprising. But others may soon speak up. The example of Donald Trump is instructive here. When he wouldn't drop his birther crusade back in the spring, GOP opinion-shapers grew nervous and began taking steps to marginalize him. In one of the most damaging attacks on Trump, conservative commentator Charles Krauthammer called his musings "the stuff you expect at a guy at a bar in closing time with slurred speech." Trump ended his fake campaign shortly thereafter, with signs suggesting that his brief polling surge had ended and that his numbers were in decline.

It's worth wondering whether Trump helped steer Perry toward outspoken birtherism. In his Parade interview, Perry noted that he'd recently met with Trump and said that Trump believed Obama's long-form was a fake. And Perry's emphasis in the CNBC interview on Obama's grades mirrors another of Trump's Obama obsessions.