The fraud of Newt

For a party without policies, the faux-candidate supplies the illusion of ideas 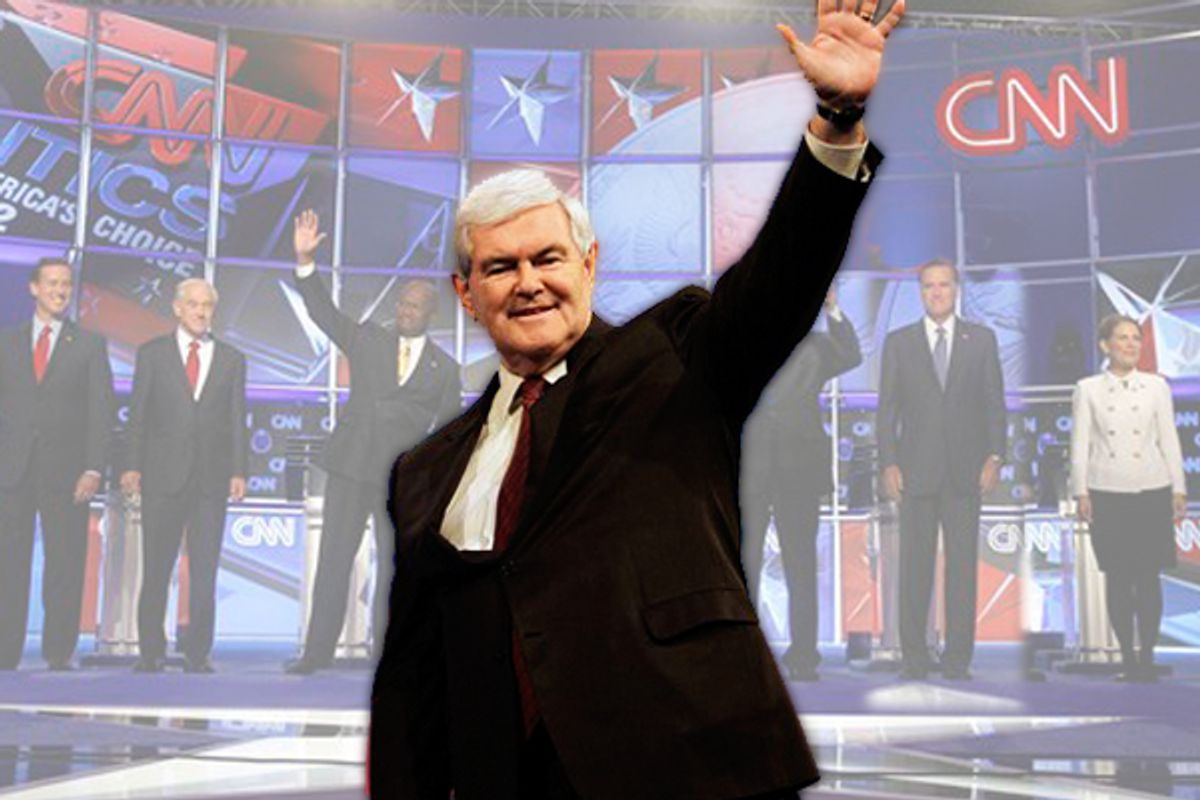 They just can’t get rid of him. Sure, Republicans who have worked with Newt Gingrich know that he’s a fraud. Rank-and-file voters have never liked the former speaker very much – and that’s before he resigned in disgrace in the wake of marital scandals and ethics scandals and not doing a very good job of managing the House of Representatives.  And yet ... look who is still running for president, now surging to third in the field in lots of current polling, and suddenly (according to the National Review) riding some comeback momentum.

The truth is that Newt Gingrich –- who is never, ever, ever going to be president of the United States, and will almost certainly never again be allowed to have any real responsibility greater than hawking his endless output of books and movies –- nevertheless fills a real need for Republicans. If Newt didn’t exist, they’d have to invent him. And the reason tells us something important about the Republican Party.

The thing is that the Republican Party just doesn’t care very much about entire realms of public policy. Oh, they care about taxes a lot, and many Republicans care about foreign policy quite a bit, although the current crop of candidates is mostly happy to duck national security issues. But does any current Republican have a transportation policy? An environmental policy? A policy on obesity? Not that I’m aware of.

Put it this way: Republicans certainly have an aversion to anything that Barack Obama supports, and therefore pledged a while ago to repeal ACA and replace it with something else. But the “replace” part of that has faded rapidly, to the point that they really don’t even bother to repeat the old “repeal and replace” slogan very often anymore. Had Obama’s healthcare plans crashed and burned back during the 111th Congress, does anyone believe that Republicans right now would be advancing plans for what to do about the problems of recisions, of preexisting conditions, of the multiple market malfunctions in health insurance? I sure don’t.

It could be that Republican lack of interest in most areas of domestic policy is simply a consequence of an ideology that opposes government involvement (although on things that Republicans do care about, such as abortion, they’re not hesitant to get the government involved). More likely, it’s a consequence of the group composition of the GOP. Organized Republican groups simply have fewer demands on the government than do organized Democratic groups; if there’s no organized group demanding the Republicans develop a policy on poverty or education or housing, then they’re not all that likely to do so.

That’s where Newt Gingrich is helpful. He has ideas -- oh, so many ideas. Well, not really, but he says that he has ideas, and that’s the next best thing. In fact, he won’t shut up about it. There’s no policy area for which Newt isn’t prepared to recite a list of buzzwords and then explain how whatever others are saying, it’s not nearly radical enough; no, things need to be entirely and completely rethought, because no one else is willing (as Newt will be happy to tell whoever is stuck listening to him) to utterly and completely rethink all the old assumptions. Frankly (as Newt will be sure to say), the others just aren’t willing to do it.

To be sure, it’s all snake oil. Saying that you have ideas, even if you use lots of power words in doing so, doesn’t actually constitute having ideas, much less specific policies that could be passed and implemented. But since Republicans aren’t much interested in the substance of all of those areas, it’s good enough. It allows Republicans to think: Yes, we too are policy innovators. We too have big plans.

In some ways, it’s like the way that Gary Hart was embraced by lots of Democratic voters back in the 1980s when he was the candidate of “new ideas.”

It was never very clear why new ideas were needed, as opposed to, you know, good ideas, and in fact there was a lot more substance to Hart than there ever was to Newt Gingrich. I don’t want to blame Hart for his more gullible fans. But just as Hart allowed Democrats to believe that they had something to add to the policy debate at a point in which many party themes were perceived as outdated or rejected, Newt allows Republicans to believe that they have something to say about all those policy areas in which it’s not entirely clear, even to them, that tax cuts will magically cure everything.

So while it’s unlikely that anyone in the Republican Party will put Newt Gingrich in an important position again -- not as long as those who remember how he handled the last one are still around and can remember how that went -- I’m afraid we’re probably stuck with hearing him yakking away for quite some time. After all, if the other guys have something appealing to sell and you don’t have anything, snake oil can seem like a really good option.