Herman Cain: Pro-life except in the case of ... his family

Another day, another baffling abortion comment: Does he even know what "pro-life" means? 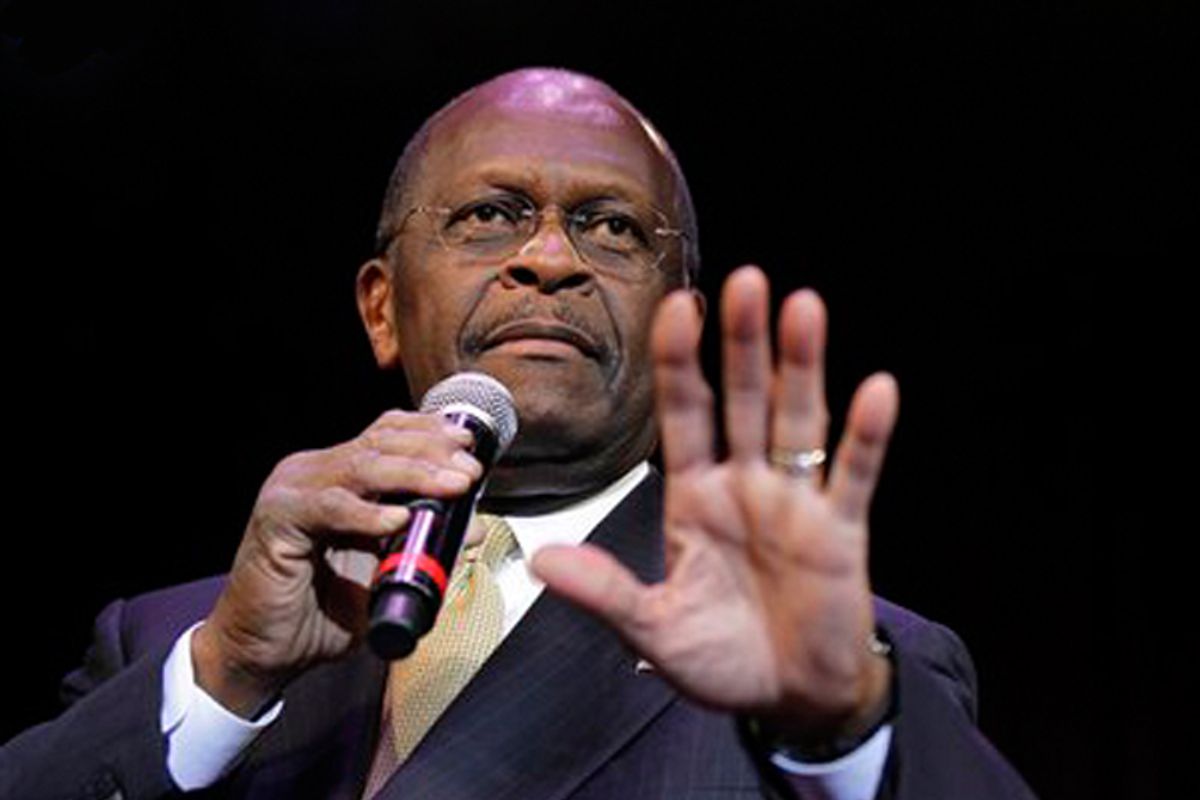 When Herman Cain talked himself into some hot water with social conservatives last week, I was inclined to give him the benefit of the doubt. The GOP presidential candidate had used some very libertarian-sounding language while discussing abortion during an interview with CNN's Piers Morgan, saying that "it’s not the government’s role or anybody else’s role to make that decision" and that "the government shouldn’t be trying to tell people everything to do, especially when it comes to social decisions that they need to make."

This prompted plenty of confusion, since Cain has presented himself as devoutly pro-life, and it gave an opening to Rick Santorum, one of Cain's opponents, to brand the comments "gravely troubling." During the ensuing media flare-up, Cain pronounced himself "100 percent pro-life. End of story." The context of the CNN interview seemed to vindicate him at least somewhat: Morgan had been asking about a specific hypothetical scenario -- what would happen if Cain's daughter or granddaughter were raped and became pregnant? So it seemed conceivable that Cain was articulating his support for abortion in the cases of rape and incest -- a position that is not uncommon among pro-lifers -- in a very clumsy, politically problematic way.

But now I'm starting to think he just doesn't understand what "pro-life" means in the context of politics. Consider this exchange from a new interview with the Des Moines Register:

Part of your 2004 Senate campaign focused on your stance against abortion, something you’ve struggled in recent days to articulate after an interview with Piers Morgan. What did you need to clarify in that interview?

A. I am pro-life from conception. Abortions, no exceptions. That has been my official stand from the beginning. What Piers Morgan was trying to do was to pigeonhole me on, “Well, what if this was your granddaughter?” You know what? If it’s my granddaughter? Yes, this is my official position, and it’s always been that. If it’s my granddaughter? I used the word “choice.” And that’s where they jumped all over it. A family will make that choice. I was not talking about the whole big issue.

I suppose this could be another example of a clumsy, politically problematic response -- that in recounting Morgan's question Cain unwittingly left out a key detail (that Morgan had been pressing him on rape/incest exceptions). But what it really sounds like here is that Cain is calling himself pro-life except in the case of ... his own family. Given the grief he took last week and the sensitivity of the abortion issue to so many Republican voters (especially in Iowa), you'd think that Cain, if he fully understands the subject and is confident in his position, would now be making sure not to leave any ambiguity in his responses. Instead, he sounds like he hasn't thought the issue through and that he's just winging it.