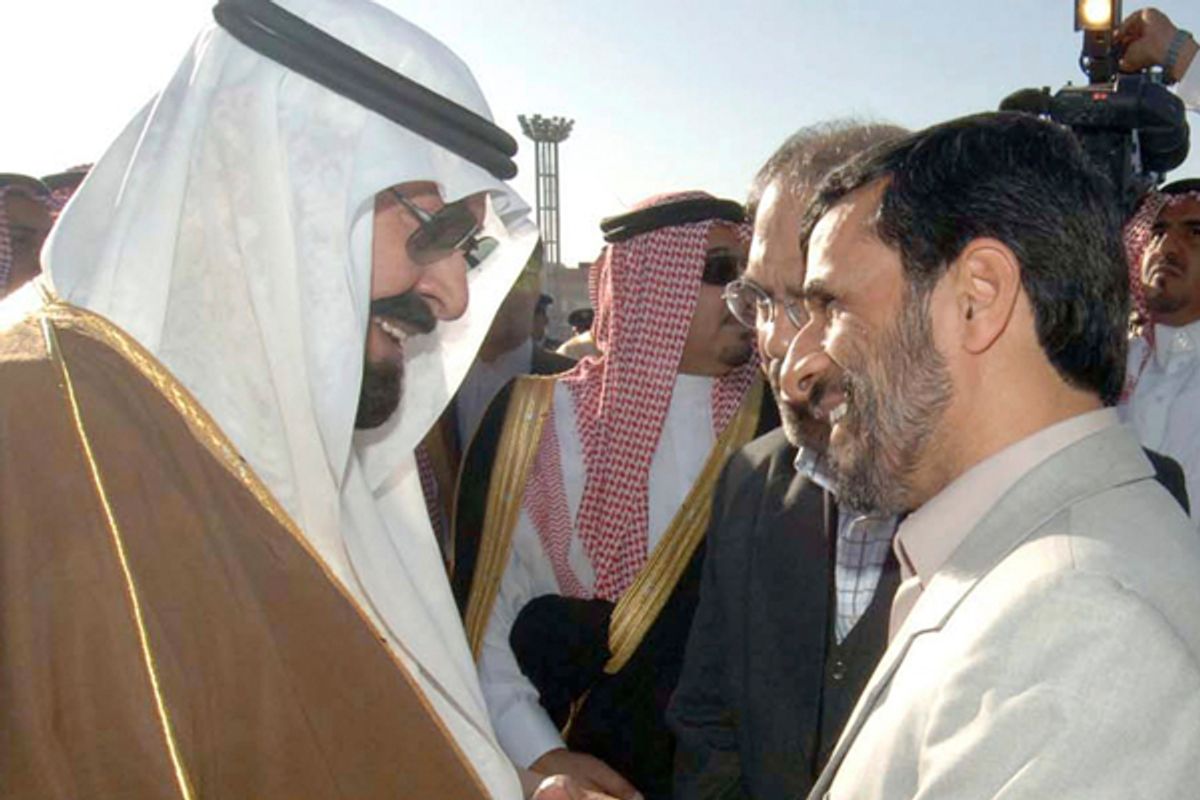 Analysts and pundits have spent the past two weeks puzzling over the alleged Iranian plot to assassinate a Saudi diplomat in Washington, in part because of a complete lack of either motive or benefit for the Islamic Republic. Iran, reputed to place much stock in cost-benefit analyses of its geopolitical calculations, clearly fails to gain materially or politically from any part of the allegations thus far. So what gives?

Instead of scrutinizing the “whys” of Iran’s involvement, it may be more illuminating to examine Washington’s motivation in advancing this bit of political theater.  The criminal charges were followed by high-profile statements and sanctioned leaks from the White House, the departments of State, Justice, Treasury, Defense, FBI and the CIA, well orchestrated for maximum impact. The U.S. government then sought to persuade the global community via the U.N. Security Council and “phone calls to many capitals” of the gravity of the charges.

Such fanfare went beyond the service of prosecuting a single crime.  More likely, the charges being leveled at Iran came in the service of “public diplomacy,” an attempt to establish a broad narrative that serves a policy decision. Pushing the narrative of the Iranian "boogeyman" is not unusual in U.S. policy circles. What may be new is the emphasis on this story in the aftermath of Arab uprisings throughout the Middle East.

Bring in the "Red Team"

Last March, as the Arab revolts swept through the Middle East and North Africa, the U.S. military’s Central Command for military operations in 20 countries -- including Iran, Saudi Arabia, Iraq, Egypt, Yemen, Bahrain and Jordan -- held a “Red Team” exercise to examine a political narrative that perpetually pits Arabs and Iranians against each other, according to a source involved in the project.

CENTCOM’s Red Team was formed in 2006,  a spokesman told me last year, to “think outside the box, offer contrarian thinking [and] ... sharpen the reasoning and force intellectual rigor” on critical issues for the benefit of senior military officials.

Here are some of the premises and questions included in CENTCOM’s Arabs versus Iranians exercise. (Note: The Red Team refers to Iranians as “Persians.”)

These narratives assume two things: that the division between Iranians and Arabs is a fact and that the greater unity of the two groups in the wake of the Arab uprisings is a potential threat to U.S. interests. Hence the worried question:  What could unite them, even temporarily?

Does the goal then become to ensure a state of chronic hostility between Iranians and Arabs?

Spokesman Maj. T.G. Taylor told Salon that CENTCOM planners "postulate multiple scenarios and potential outcomes to better anticipate and understand the nature of a complex and diverse region.  It is through this prudent military planning and cultural research that we are able to evaluate how to best protect U.S. and partner interests while reducing the risk of miscalculation stemming from ethnic and national differences."

There is no disputing the region is rife with fault lines that divide populations.  I call the three biggest the Stink Bombs of the Middle East: Sunni versus Shia, Arabs versus Iran, Islamists versus secularists.  While there may be some natural tension between these groups, since the 1979 Iranian revolution there has been a marked increase in narratives that create fear of Shiites, Iranians and Islamists for geopolitical advantage.  And U.S. allies in the region -- Jordan, Saudi Arabia, Egypt, Kuwait, Bahrain, Yemen -- have been at the forefront of these efforts.

“... is Sunni-Shia a more appropriate framework? Arabs are afraid of Persian hegemony ...  Islam vs Judeo-Christians ...”

Such  themes have been embedded in superficial narratives of the Middle East that recur in our media.  The Red Team exercise was not particularly exceptional in many respects. But two things are highly unusual about this drill: the timing and its sponsor. The question baffles: Why did the U.S. military decide to shine a spotlight on the Arabs vs. Iran narrative three months into the uprisings sweeping through the Arab world?

Why not a broader, more urgent evaluation of how to realign U.S. interests with emerging democratic actors in the region?

The balance of power shifts

At the time of the Red Team exercise, peaceful, political protest had swept away pro-American regimes in Tunisia and Egypt and reached a critical mass in Bahrain and Yemen. The former is home to the U.S. Navy's Fifth Fleet. The latter is an operational center for al-Qaida and a recent proxy battleground for Saudi-Iranian tensions.

U.S policymakers had reason to worry. The de facto beneficiary of the uprisings was Iran, a country that for three decades has challenged the primacy of U.S. and Israeli interests in the Middle East.  The fall of pro-U.S. dictators all but guaranteed that, in the hands of new populist leaders, the region’s foreign policy outlook would likely shift toward Iran’s perspective, although not be steered by Iran.

According to the New York Times’ David Sanger, the U.S. administration never lost sight of this development. Last February, a month before the Red Team exercise, he wrote;

“Every decision — from Libya to Yemen to Bahrain to Syria — is being examined under the prism of how it will affect what was, until mid-January, the dominating calculus in the Obama administration’s regional strategy: how to slow Iran’s nuclear progress, and speed the arrival of opportunities for a successful uprising there.”

Viewing the Arab uprisings through an Iranian lens offered a possible advantage for the United States. Arab public polls consistently favor Iran when it is contrasted with the United States, but not nearly as much when it is compared to other Arab regimes, even unpopular ones.  This tendency has long provided opponents of Iran to sow discord in the Arab world– even before the 1979 Islamic Revolution, but especially afterward. Narratives about expansionist, aggressive aspirations of the Iranian Shia have been sown far and wide in the largely Saudi-controlled Arab media, even though there has not been a serious conflict between Iranians and Arabs since the Iran-Iraq war ended in 1988.

A testimony to the power of propaganda and the knowledge deficit it encourages, mistrust between Iran and many Arab nations has simmered on low boil ever since. As Washington seeks to manage its losses and assert some control over future developments in the region, this narrative tool becomes a cost-effective way to wrest back some of its primacy by defining a new Middle East and drawing others into those  assumptions.

The Pentagon and social media

The Red Team exercise did not take place in a vacuum. The Arab revolts have, to a large degree, been driven by the existence of social media platforms, valuable communication assets in countries where public congregation is not encouraged, or is altogether banned.

The Pentagon is actively seeking to understand, influence and control these platforms and the messages they transmit. In July, the technology arm of the Department of Defense, DARPA, announced a $42 million program to enable the U.S. military to “detect, classify, measure and track the formation, development and spread of ideas and concepts (memes)” within social media.

Wired magazine calls the project the Pentagon’s “social media propaganda machine” because of its plans for “counter messaging of detected adversary influence operations.”

In order to “allow more agile use of information in support of [military] operations” and “defend” against “adverse outcomes,” the project will enable the automation of processes to “identify participants and intent, measure effects of persuasion campaigns,” and ultimately, infiltrate and redirect social media-based campaigns overseas, when deemed necessary.

With cyberspace now designated an “operational domain” for the armed forces, we don't know when and where these online tools will be mobilized. But we can be certain one of the most likely targets is Iran, which earlier this year announced plans to disconnect from the rest of the world and establish its own national Internet.

Promoting the narrative that casts Iran as a regional threat to Arab nations serves several urgent interests today: It justifies the upcoming sale of more than $120 billion in weapons to Arab governments, and works toward preventing Iran from gaining a further foothold in Iraq once U.S. troops complete their withdrawal in December.

But the Arab uprisings have interfered with Washington’s story. Saudi Arabia, Iran’s main rival and the U.S’s closest Arab ally, has sent troops into Bahrain to violently quell protests, has offered sanctuary to embattled dictators and is subsidizing many of the remaining autocratic Arab regimes throughout the region.

Counter-revolutionary Saudi Arabia's substantial treasury insures its perspective will be heard in Washington. The Saudis will pay for more than half -- $67 billion -- of the total value of the region's controversial arms purchases. The monarchy is also developing an elite 35,000-man force to “protect the kingdom’s oil riches and future nuclear sites,” to be overseen by none other than CENTCOM.

The Arab revolts pose a threat to such business. In recent months, the Obama administration has been hard-pressed to gain approval for even a mere $53 million slice of its weapons sale to Bahrain, which has been censured internationally for its suppression of peaceful protests.  Withstanding pressures from Congress and human rights groups, a State Department official last week finally announced the approval of the sale.

“The deal is part of a move to defend Bahrain from aggression,” a spokesman told the Gulf News, a not so subtle reference to Iran.

As these Arab uprisings continue to dismantle the regional status quo – for better or for worse – it appears the United States is acting not in accordance with its declared values, but is instead allowing financial and hegemonic calculations to drive foreign policy. Narratives manufactured to support myopic interests over fundamental values cast a long shadow over our ability to play a leading role in global affairs.  We don’t reason, we spin.  And, in the case of this newly vulnerable Middle East, nobody is more proficient in the business of keeping conflict humming.