Crossroads GPS is blanketing Iowa with ads, but rich liberals are skeptical of equivalent Democratic groups 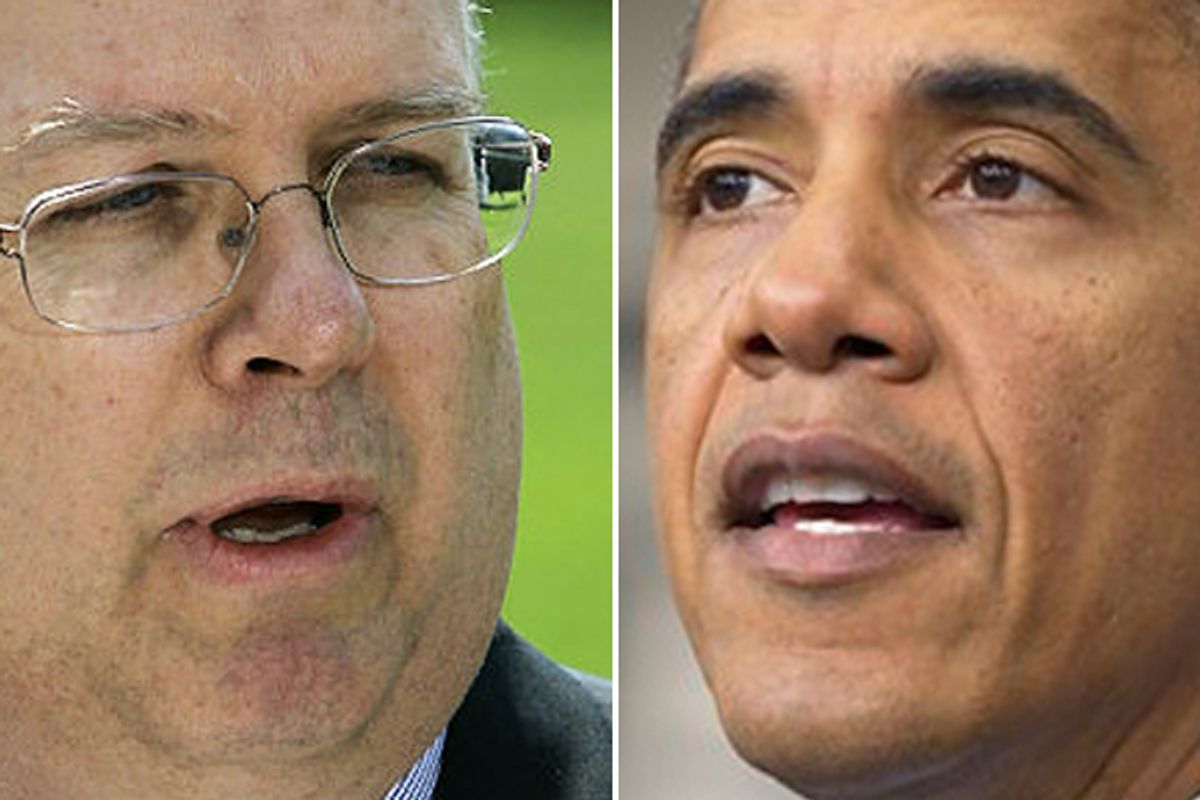 Crossroads GPS, the Karl Rove-backed independent "Super PAC" that will spend an obscene amount of money on behalf of Republican candidates over the next year, is already blanketing seemingly random congressional districts with attack ads simply because it can.

After redistricting, Rep. Tom Latham, a Republican representing Iowa's 3rd District, found himself living in the district represented by Steve King, one of the party's most celebrated and powerful total nutjobs. So Latham's moving to the new 3rd District to run against Rep. Leonard Boswell, D-Des Moines. The Iowa Independent reports that Crossroads is getting an early start on the campaign:

The group has spent $85,125 so far at KCCI, the local CBS affiliate in Des Moines and the state’s largest network TV station. The group has run ads since late June, and recently spent $13,472 for ads running between Oct. 25 and Nov. 3. At least a portion of the ads being run in Iowa target Democratic U.S. Rep. Leonard Boswell.

The election is a year away. Crossroads just has money to burn.

While Democrats continue to outpace Republicans in "traditional" fundraising -- with Obama outraising all his GOP rivals and the Democratic congressional and Senate campaign committees outraising their GOP equivalents -- Ken Vogel writes today that Democrats can't keep pace with the GOP when it comes to funneling anonymous money into unaccountable independent groups with no spending limits.

"A network of the seven most important Democratic outside groups, including Priorities, raised less than $11.7 million this year," according to Vogel. One Crossroads group spent $20 million on ads this last summer.

Here are some of the problems: Rich people are mad at Democrats for not loving rich people enough. Liberals are mad at Obama for ... a host of reasons. Democrats have spent years decrying outside spending by Super PACs and organizations like them. And also, as always, the problem is people like Ben Nelson:

“There is a discontent brewing with both the super PACs and the party committees because there are donors who don’t want their money going to help the likes of a Ben Nelson, who can’t even vote to extend unemployment benefits, or some of the Blue Dogs,” said Leo Hindery, a New York investor who’s contributed more than $2.8 million to Democratic candidates and groups. “But in principal, I dislike the super PACs more than I dislike the committees, as I hate seeing either party playing the so-called PAC game.”

Meanwhile, mega-rich liberals -- like George Soros -- have shifted their funding from campaigns to think tanks and long-term projects designed to build liberal institutions. (This seems like a wiser investment than getting Democrats elected to the Senate, frankly.)

All of this is basically why Democrats so wholeheartedly embraced "centrist" pro-Wall Street corporatism in the first place: Republicans have a built-in donor base of rich industry tycoons, so Democrats need the support of the rest of the 1 percent.