The war on Halloween 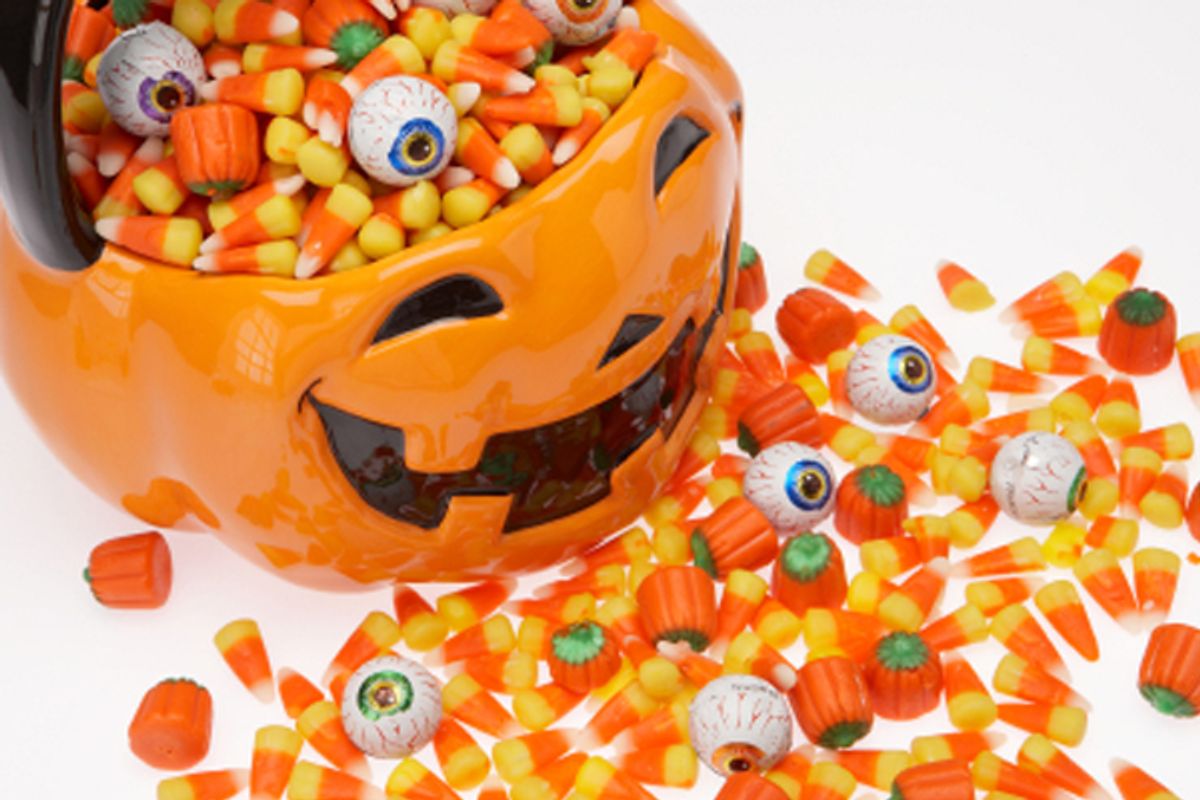 When I was a kid, the worst thing my mother had to worry about regarding Halloween candy was that some mythic madman would somehow manage to slip a razor blade into a Baby Ruth. Ah, simpler times. Now, however, Halloween is no longer a simple exchange of your family's big bag of fun-size treats for those of all the other families in the neighborhood. It's become a minefield of reasons to feel guilty. I'm talking about the War on Candy.

As a mother of two, I've noticed a creeping austerity in our treats haul in recent years. Sure, we were used to the Bug Bites Endangered Species mini-chocolates that reliably cropped up from the more eco-friendly parents along the trick-or-treat route. But last Halloween, we seemed to score a record number of pencils, toy bugs and, unsubtly, toothbrushes. And the least enthusiastically embraced prize in my daughters' bags was a pamphlet explaining that deforestation from the palm oil in some candy brands is threatening to wipe out Southeast Asia's orangutan population. It was festooned with skulls and read: "DYING FOR A COOKIE?" Sorry, kids.

Candy's threat to orangutans has, fortunately, diminished in recent years. The demand is still strong – the World Wildlife Foundation notes that half of all supermarket products contain palm oil and that "consumption of vegetable oils has increased more rapidly during the past 30 years than any other food." But many of the big candy brands, including Nestle, Hershey's and Mars, are now members of the Round Table on Sustainable Palm Oil and making the move to sustainable palm oil. But others still haven't. And as much I don't appreciate a buzzkill memo in my children's goody bags, I want my kids to grow up in a world that has orangutans, and that's likelier by sticking with brands that carry that RSPO label.

There are plenty of other potential problems all along the candy-corn highway. In a chilling essay for Good earlier this month, writer Kristin Howerton laid it on the line. It was called, bluntly, "Child Slaves Made Your Halloween Candy. Stop Buying It." She notes that "The connection between major candy bar manufacturers and child slavery is one of the world’s best-kept secrets" and that the West African farms that are the source for nearly half of the world's chocolate are rife with child laborers. The Labor Rights Campaign reports that thousands of Cote d'Ivoire children are working in the cocoa industry – despite over a decade of promises from the industry to certify a meager 50 percent of their farms "child labor free." As the campaign points out, beloved Halloween fave Hershey's still "does not have a system in place to ensure that its cocoa purchased from this region is not tainted by labor rights abuses ... and continuously refuses to identify its cocoa suppliers."

There's more. With food sensitivities and allergies on the rise, those innocently doled out Reese's Peanut Butter Cups and Almond Joys are rapidly becoming verboten at school parties and neighborhood gatherings. And, in an attempt to raise awareness of the hazards of all things sugary and sweet, pediatric dentists have begun offering buy-back programs for kids to turn their Halloween candy into cash. It's like amnesty, but for Kit Kats. Oh, and by the by, childhood obesity has tripled in the past three decades. I feel like the druids just didn't have these issues.

Halloween is just one day – even if that giant bag of candy always seems to last till the Easter Bunny dumps his annual shower of chocolate eggs and gummy bears. I don't want my kids – or yours – to come home on Oct. 31 with a bag full of toothbrushes and earnest pamphlets. But I do believe in the power of conscious consumer choice. I want my children to understand that there's a connection between them and the orangutans of Borneo and the kids of West Africa. That there's a connection between what they put in their bodies and what happens to their teeth and their hearts. That even on a day when we dress up, we can be authentic. Truth is, those organic Bug Bites are pretty damn delicious.