Where does Occupy go from here? 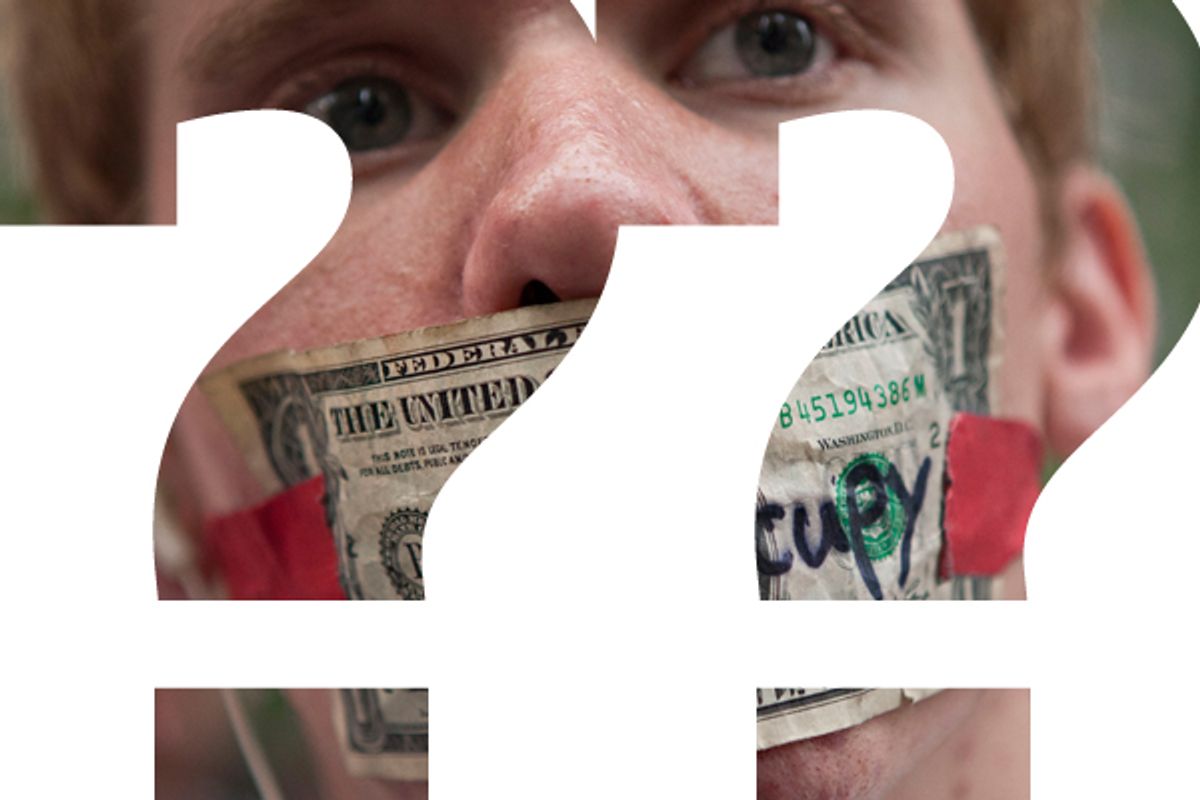 We're a little more than a month into Occupy Wall Street, and there are signs that public interest in the protest campaign is cresting.

According to an analysis by Micah Sifry, the number of Facebook "likes" for Occupy groups, as well as the number of Occupy-related Google searches -- admittedly crude tools for measuring public interest -- appear to be leveling off.

Meanwhile, winter is approaching in New York and questions remain about whether the administration of Mayor Michael Bloomberg will allow protesters to continue the original occupation in lower Manhattan, which has become the heart of the movement.

For a historically informed take on the challenges and opportunities Occupy Wall Street faces, I spoke to Michael Kazin. He is professor of history at Georgetown and author of "American Dreamers: How the Left Changed a Nation."

We're now a month-plus into this. Does Occupy Wall Street remind you of any past movements or does it seem like a fundamentally new type of thing?

This is the first time in a long time, perhaps since the 1930s, that the left -- and I think this protest does belong to the left, though a lot of people who are involved in it wouldn't call themselves that -- has focused on economic injustice as a central issue. That is both new and of course harks back to the beginnings of the New Deal. At that time, most activists on the left were primarily targeting economic inequality -- in the form of wages, the lack of democracy at work, and resistance by industrial corporations to recognizing unions. What's obviously different now is that Occupy Wall Street has been put together by people who are  proud of being children of the Internet age: with horizontal organization, leaderlessness and consensus decision-making. The main tactic is about hanging out with and learning from one another. There is no sense of how the tactic will lead to either taking political power or having a big share of political power. This movement seems to think from tactic to tactic, rather than tactic to strategy.

Is there precedent for this kind of form and structure?

Many a protest campaign begins this way. The sit-ins at Woolworth lunch counters beginning in February 1960 had an end -- desegregation of public facilities -- but they weren't quite sure of where it was going after that. They just thought, "This is a neat tactic that will draw attention." And it did. That began with four students in Greensboro, N.C. But it soon blossomed, and now their lunch counter is in the Smithsonian. The movement against the Vietnam War also began with very small protests in 1964, and then grew into ones with hundreds of thousands of demonstrators. So protests can grow and become catalysts for larger and more diverse movements.

The two examples you just mentioned had obvious, discrete goals they were trying to accomplish. In contrast, Occupy Wall Street has only a broad theme. Are there precedents for this?

There was Coxey's Army in 1894, which was the first group to march on Washington. They were mostly unemployed people with a vague demand for public jobs. But they were basically just pissed off about the widespread depression of that era, and they were determined to compel Congress and the president to do something. Like Occupy, they did not have a well-worked-out agenda. Historians disagree about what effect the march had. But it certainly dramatized the situation of the poor and the unemployed, much as Occupy Wall Street is trying to do. People marched from around the country on Washington; they took freight trains, and hitchhiked on wagons, and walked a lot, too. It was very dramatic and the press covered it very widely. But the depression continued until 1897.

What can Occupy learn from history about how to sustain itself beyond the initial burst of interest and energy?

I think protests like this have to progress from tactic to strategy if they are going to endure. They have to either start their own organization -- as the sit-in movement started SNCC -- or link up with other organizations. The problem with that strategy  is that what's gotten people's attention is the clever, somewhat novel tactic Occupy is using -- and the participatory, very small-d democratic nature of it. The next step will inevitably not be that clever and novel. But for it to go anywhere, the Occupiers have to figure out, to some degree, what kind of demands they want to make. That doesn't mean they need a 12-point program, but maybe a three-point program. They have to figure out what sort of relationship they want to have with existing groups on the left. But with no leaders and everything run by consensus, how do you make these decisions?

What's more likely to happen -- and I think to some extent already is happening -- is that this will become a catalyst for other people to do other kinds of things about economic inequality. I think it's likely that Occupy Wall Street will be seen as a spark. I think it's unlikely that people are going to stay in the park for month upon month unless they are homeless. Most people eventually will want to get on with their lives. In the end, a tactic, no matter how successful, is just a tactic.

You earlier made the distinction of a protest campaign versus a movement. What makes a movement?

I think a movement first of all has to be sustained. It has to have some sense of direction. It has to be able to assess when it's succeeding and when it's failing. And it has to have some kind of leaders. They don't have to be elected, but I think it's better if they are because then they are accountable. You don't have to have one leader. For all the attention on Martin Luther King Jr., he was not the only leader of the black freedom movement. There were many, some in local areas, some as heads of national organizations. The better orators often became leaders, for better or worse

So where do you see Occupy heading?

The most optimistic way to look at it is that this protest campaign will be a catalyst for people working on issues of economic justice anywhere in the country and, to a degree, in other countries as well. The negative possibility is that this will devolve like the global justice campaign of a decade ago, which is best known for the Battle of Seattle in 1999. It seemed hugely exciting at the time. I wrote a long Op-Ed in the New York Times in which I predicted this would be the beginning of broad new attack on concentrated wealth, comparable to the populist movement in the 1880s and 1890s. But it fizzled. Its targets, the World Bank and the International Monetary Fund, were hard for most Americans to get excited about. In "American Dreamers," I quote an activist who says it was pretty hard to get people to understand what the World Bank actually did. Occupy Wall Street is more visceral. Young people are afraid they're not going to get jobs. People are unemployed. They are losing their houses. These are issues that everyone understands.