Is there any leader in the country who makes a more persuasive case for the principles behind the protests? 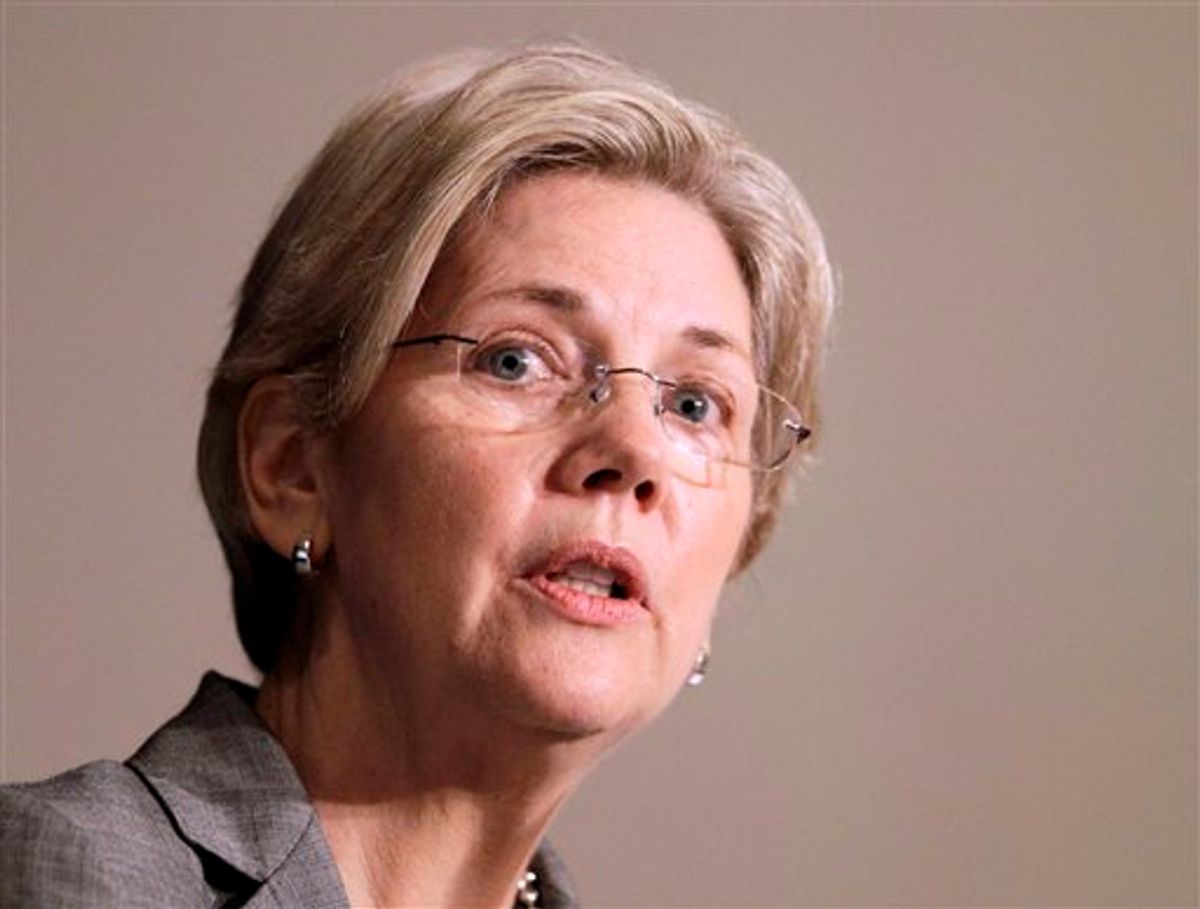 The Democratic nomination to oppose Massachusetts Senator Scott Brown won't officially be awarded until September of next year, but whatever suspense there was just ended: Yet another of Elizabeth Warren's opponents is set to drop out of the race, making the anti-Wall Street Harvard professor the all-but-certain nominee.

Alan Khazei, the City Year founder who had been the race's front-runner before Warren's entrance, is expected to formally withdraw today. His departure comes on the heels of two other early exits -- Setti Warren, the black mayor of a very large and very white Boston suburb; and Bob Massie, a social activist who once served as the party's nominee for lieutenant governor -- leaving Warren to face only a scattering of longshot rivals in the Democratic primary.

Taken together, these three withdrawals are a testament to the surprising -- and, if you're a Brown fan, dismaying -- political talent Warren has demonstrated in her six weeks as a candidate, and set the stage for perhaps the premier 2012 election test of themes behind the Occupy Wall Street movement.

When Warren began toying with a Senate race after it became clear that Senate Republicans would never permit her to head the new Consumer Financial Protection Bureau, there was reason to doubt her prospects. A career academic with no previous experience running for office and relatively little name recognition, there was no telling how she'd fare under the spotlight of a high-stakes political campaign; it was hardly inconceivable that -- sort of like Rick Perry at the national level now -- she'd wilt and end up falling behind her primary opponents, all of whom had been running hard for months before her emergence. And even if she got through the Democratic primary, there was the matter of Brown's  formidable personal popularity -- easily the most well-liked politician in blue state Massachusetts, polls showed. Might as well include the gruesome track record of female candidates for major office in the Bay State, too. (I will admit: I was among the skeptics.)

But now, just six weeks after announcing her candidacy, Warren has effectively cleared the Democratic field. She's also raised some serious money: $3.15 million was the total she listed on her most recent campaign finance report (which was released nearly a month ago) -- a powerful sign that a network of small-dollar donors will keep her financially competitive with Brown despite the hostility of big givers from the financial services industry to her. And polls show her already in a dead heat with Brown, even though she remains unknown to nearly 40 percent of the electorate and he remains widely-liked on a personal level. There are even hints that Warren's quick start may be unnerving Brown, who made a crude reference to her on a Boston radio show a few weeks back, the sort of behavior that could damage his personal appeal to voters.

If there's one overarching key to Warren's early success, though, it's this: She's built her candidacy on a clear populist message aimed at economically anxious middle class voters -- and she's startlingly effective at delivering it. Democratic politicians who speak in familiar, poll-tested language about "fighting for the middle class" and "standing up to special interests" are a dime a dozen, but Warren has demonstrated a knack for illuminating the principles behind these otherwise empty terms with remarkable clarity and passion. Just consider her explanation of the social contract, which was featured in a YouTube video that almost instantly when viral:

More than anything, it was this video that truly brought Warren's candidacy to life. Her basic story -- a crusader against Wall Street's excesses who'd been thwarted by the big banks and their bought-and-paid-for Senate allies -- was always going to have appeal to Democrats. But watching her display such dazzling communication skills created new energy and urgency for many of them: We need her making this case against Brown. It's impossible to quantify, but the social contract video is clearly a major reason Warren was able to marginalize her Democratic opponents so quickly. As Khazei told the Boston Globe yesterday: "She has struck a chord, no doubt about it."

In a way, this sets Warren's campaign as a perfect test of the power of the Occupy Wall Street movement's message. She's fully embraced OWS, and in fact is taking some heat for saying the other day that "I created much of the intellectual foundation for what they do." Republicans are promoting the quote -- with plenty of assistance from the media -- in an effort to make Warren seem self-aggrandizing and, as Slate's Dave Weigel put it, "to link Warren to every Occupy-connected jerk who throws something at a cop."

In context, of course, Warren's claim doesn't seem quite so boastful, and her point is taken: She's devoted much of her academic career to exploring and explaining the middle class squeeze, and as the chairwoman of the TARP oversight panel in 2009 she pressed relentlessly for Wall Street reforms that would provide meaningful protection for consumers. And in her six weeks as a Senate candidate, she's been more effective at expressing the animating principles of the OWS movement than just about any other political leader in the country. In other words, as Greg Sargent explained this week, both Warren and the GOP seem prepared to let the race turn on OWS:

[N]ational Republicans are placing their bet. They are wagering that the cultural instincts of the working class whites and independents who will decide this race ensure that the excesses of the protesters will make them less inclined to listen to her populist economic message, which is also directed at those voters. This is an old story in American politics, of course. Conservatives have for decades been mining the tension between blue collar whites and liberal middle class activists who resort to outsized protest tactics and occasional violence. That’s why you hear conservatives constantly referring hopefully to today’s protesters as “McGovernites.”

You might assume that this is a fight Warren can't lose, since it's taking place in Massachusetts -- the only state where "McGovernites" outnumbered Nixon voters in 1972. But be careful. Massachusetts is often regarded as an extremely liberal state when it is really an extremely Democratic state, one that includes many Democratic-leaning blue collar voters with conservative cultural instincts. These voters were at the heart of Brown's special election victory in 2010, when he carried working-class cities like Fitchburg, Lowell and Quincy and cleaned up in middle class bedroom communities.

And then there's the counterpoint to the state's '72 support for McGovern: That same year a Vietnam veteran named John Kerry ran for an open House seat in the Lowell-based 5th District and found himself vilified by the locals as an unpatriotic carpetbagger. Kerry lost the race to Republican Paul Cronin, who was defeated two years later (by Paul Tsongas) and who remains the last Republican to win in the district.

It would be dangerous to underestimate the appeal of Brown's guy-with-a-pickup image, and it's just too soon to say whether the national GOP's effort to scare swing voters away from anyone tied to OWS will succeed. Still, Warren is in a far, far better place right now than she was six weeks ago, while Brown is far, far more vulnerable than it looked like he'd be earlier this year. Which means there's some egg on the face of anyone who said she'd be making a mistake by running.