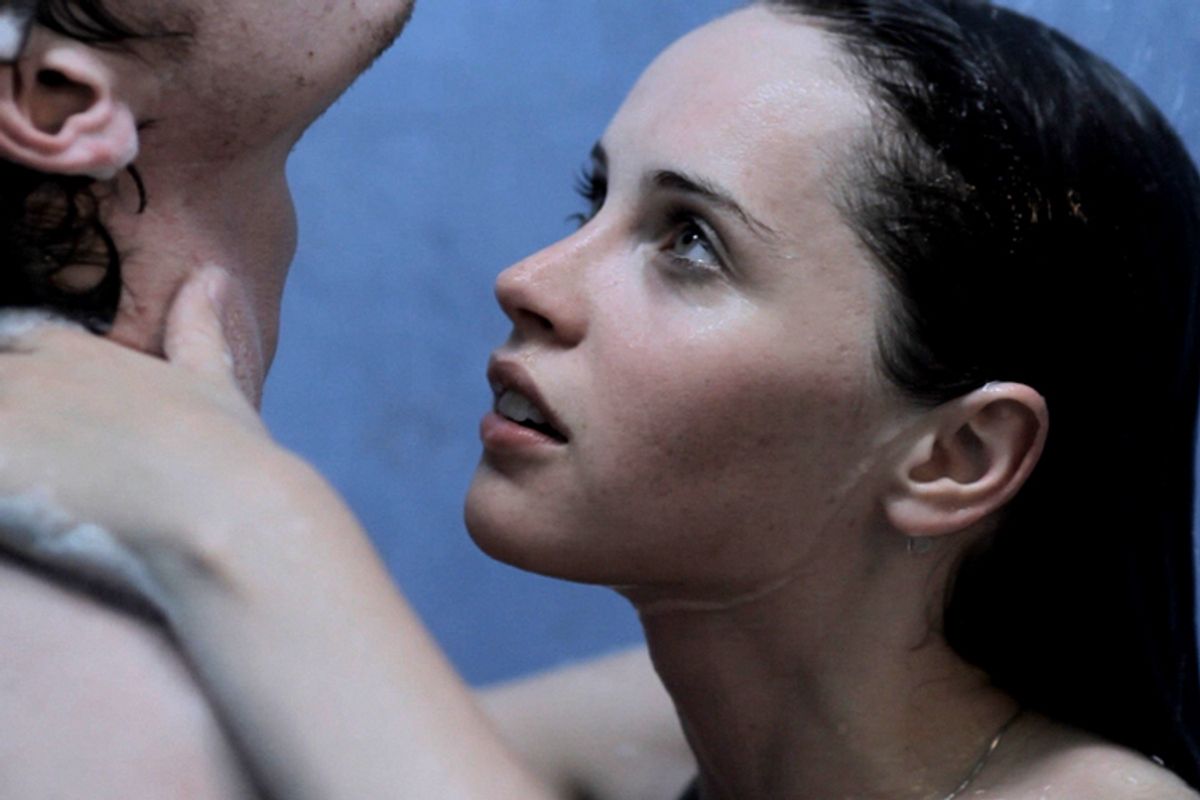 Either movie romance has hit an all-time low or I've become an incurably sour crustacean in my bourgeois middle years (and I don't propose putting that to a vote). In either case, I really don't understand why anybody thinks the wispy, bittersweet tale of long-distance love in "Like Crazy" is any big deal. Seriously, I liked this movie better last year, when it had Drew Barrymore in it and was called "Going the Distance." That one was definitely funnier and raunchier, and did not feature an earnest young couple sitting on the bed in a crummy Los Angeles apartment, staring into each other's eyes and listening to Paul Simon's "Graceland." OK, yes, I recognize that was an important album in pop history, a lot of people love it, etc. -- but as the central soundtrack for a movie romance set in 2011? Honestly? If I was hanging out with these two and they slapped that on the iTunes, I'd be like, "Later! Gotta go sell crack outside the middle school!"

Now that I've pissed people off for no reason, I will back into a neutral corner and observe that this is exactly the issue with "Like Crazy," a double Sundance award-winner that was crafted with care by young director Drake Doremus and features some lovely, relaxed performances. This movie's either going to speak straight to your heart or it very much won't, and I fall into the "nope" category. Anton Yelchin and English gamine sensation Felicity Jones make an undeniably adorable trans-Atlantic couple, possibly so adorable they will make your gums bleed, and the story has a leisurely, naturalistic pace and a sort of willful, naïve openness that makes it feel different from nearly all Hollywood romances. In fairness, it's not as if watching "Like Crazy" was acutely painful or anything (as long as "Graceland" was off the menu). But it never moved me in any memorable way, or made me want to spend more time with these cute but dull middle-class people than was absolutely necessary.

I get that Doremus is trying to make a movie that breathes and unfolds episodically and gradually, as does the relationship between the almost somber-spirited American grad student Jacob (Yelchin) and chirpy British undergrad Anna (Jones). They meet at a college that may be UCLA, where he's the T.A. in a class she's taking. After the final meeting, Anna works up the courage to shove a mildly stalkerish note and poem under his windshield wiper. But since exceptionally cute girls who weigh 95 pounds soaking wet and write earnest poetry are hardly ever considered true stalkers, it works out OK. Even through the awkward first coffee-shop date, the connection between Anna and Jacob is intense and immediate. This part of the movie has an undeniable and luminous power, with John Gulesarian's camera capturing the single-minded focus of new love.

Doremus wants you to surf the highs and lows with Jacob and Anna as they spend a torrid summer together (screwing up Anna's immigration status in the process), break up and get back together and then drift across the ocean and into new lives, allowing a relationship that's obviously something special to crack up on the shoals of youthful uncertainty and overconfidence. You absolutely don't have to be young to identify with the stupidity and uncertainty of young lovers (indeed, increasing age does not necessarily cure those ailments) and, in theory, Doremus is to be commended for making Jacob and Anna relatively average upper-middle young adults, not especially hip or transgressive. The downside, at least for me, was that I found them so thoroughly uninteresting that I didn't much care whether they stayed together or found other, equally irritating partners.

Alex Kingston (once a cast member of "E.R.") and Oliver Muirhead are so enjoyable as Anna's meddlesome, vaguely bohemian and thoroughly English parents that I wished profoundly to be transported into a Mike Leigh film that was about them instead. But Doremus is completely cheating when he introduces Jennifer Lawrence, as a subservient, personality-free blonde, and Charlie Bewley, in shoes and a haircut straight off the pages of Maxim, as the dismal new lovers with whom Jacob and Anna respectively drift into relationships. (Let's discuss what the hell has happened to Lawrence's movie career some other time.) Both are pretty but entirely odious and self-evidently wrong, and you just know this isn't the kind of movie that ends up that way.

That leaves us with the distinctive, wistful mood of "Like Crazy" (which Doremus co-wrote with Ben York Jones) and the central couple, who are undeniably beautiful. With her dark hair, green eyes, perfect skin and Cupid's-bow mouth, Jones is a genuine heart-stopper, but I actually preferred the reserved performance of Yelchin, who has the androgynous hair and physique of a Renaissance angel. I gather that if you're less cynical than me, or a fair bit younger, or just broke up with that girl or guy who went back to that other city and now you feel awful about it, then that combination will be more than enough. It helps, though, if you really, really like "Graceland."