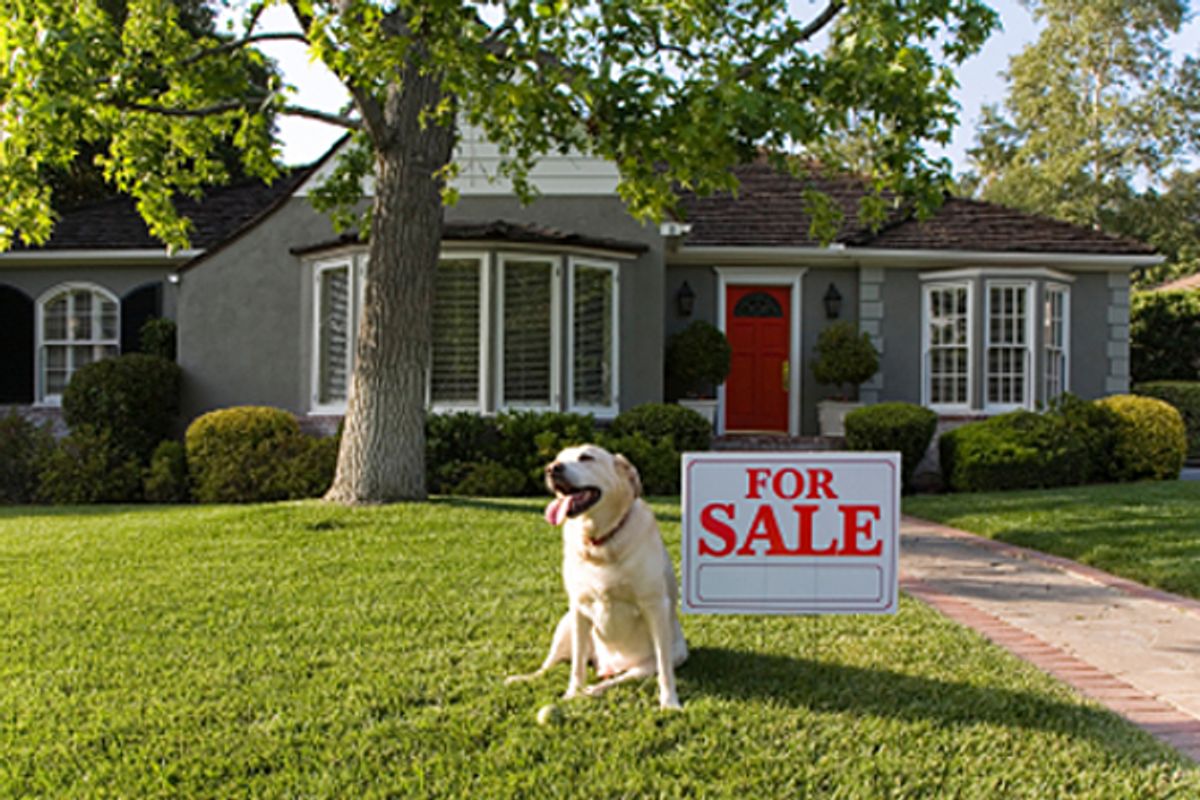 Yet un-serious is what we continue to get from elected officials. This week the Obama Administration announced a new plan to help underwater homeowners refinance their mortgages to lower rates.  The plan, really an expansion of an existing program, is the latest in a series of programs designed to deal with the moribund housing market. Each has proven a more dismal disappointment than the next.

So too with the latest version of the proposed settlement between the state Attorneys General, led by Iowa’s Tom Miller, and the mortgage servicing industry. Yes, the deal has been sweetened by the addition of some interest rate reductions for underwater homeowners who are current on their payments. But that’s small potatoes.

These approaches haven’t worked and won’t work because they fail to acknowledge that negative equity is the critical problem in the U.S. economy. We’re in a “balance sheet recession” caused by people pulling back on their spending because they’re concerned about their households’ net financial position. The central reason for this concern is that houses—historically the major asset of most households—are worth much less than they were. In many cases, they are worth less than the debt they secure.

Until households feel more confident in their balance sheets, they won’t go out and spend (and banks won’t make them loans to spend).  That means less consumer demand for goods and services, which means less jobs, which means more mortgage defaults and foreclosures, which push down neighbors housing prices, triggering a vicious cycle. But addressing negative equity means that someone will have to accept a loss: the banks or the taxpayer or some combination of the two.

As between banks and taxpayers, we have to start by stating the obvious. Negative equity didn’t just appear by itself.  This wasn’t a freak meteorological event.  It was a man-made disaster: a housing bubble inflated by the deliberate acts of a limited number of financial institutions that profited greatly from bloating the economy with cheap and unsustainable mortgage financing. We witnessed a macro-economic crime in the inflation of the housing bubble and are living with the consequences of it.

Those who broke the economy should pay to fix it. The federal government bailed out the banks because they are indispensable to the economy as a whole, but that doesn’t mean that the banks shouldn’t have to pay now. Simply put, there needs to be accountability for blowing up the economy. (And someone needs to go to jail, but that’s another matter.)

Unfortunately, the goal of the Administration and the Attorneys General seems to be to make the housing problem go away. It won’t go away. Nearly four years of economic malaise and over five million foreclosures attest to that.  The goal has to be to fix the market, not to cover it up its problems.

Since 2008, we’ve seen a long and drawn out saga in the attempt to deal with the negative equity problem.  First there was a legislative attempt.  This was the ill-fated “cramdown” legislation that would have permitted homeowners to slough off negative equity by filing for bankruptcy, something that it currently possible when dealing with every asset except a single-family principal residence.  Cramdown would have forced lenders to recognize losses on bad mortgage loans and would have gotten the market clearing again—at least for those borrowers who were willing to endure the costs of bankruptcy.

The Obama Administration turned its attention to its hallmark housing rescue programs:  the “Home Affordable Modification Program” (HAMP) and Home Affordable Refinancing Program (HARP).  HAMP is a program to modify troubled mortgages to lower interest rates, while HARP permits some underwater homeowners (a lucky subset whose loans chance to be owned or guaranteed by Fannie Mae or Freddie Mac) to refinance to lower interest rate mortgages.  Neither does anything to reduce negative equity.

HAMP and HARP were kick-the-can-down-the-road programs that aimed to buy time for the economy to recover, thereby bolstering home prices.  They failed because they misdiagnosed the problem:  the damaged economy wasn’t dragging down home prices; home prices were dragging down the economy.

HAMP and HARP were barraged with criticism on both sides from the get-go.  HAMP was the program that sparked Rick Santelli’s rant that gave birth to the Tea Party. At the same time, HAMP and HARP were criticized by consumer advocates as too timid. The Administration didn’t want to take on the negative equity problem, which would mean imposing losses on the banks or on the taxpayers.

In the fall of 2010, the “robosigning” scandal provided an entrée for the state AGs to join the fight. It was revealed that banks were routinely submitting affidavits in court cases in which the affiant had no idea about the facts to which he would attest. Several major banks imposed voluntary foreclosure moratoria while they examined their practices. (Unfortunately the media coverage missed the real and much more serious issue of backdating of documents by the banks.)  The robosigning scandal provided an entrée for state AGs, some of whom have been dealing with bank mortgage fraud issues for the better part of the last decade, only to find their efforts repeatedly frustrated by  federal bank regulators.  Quickly all 50 AGs announced an investigation, with Miller taking the lead.  Federal bank regulators then announced their own investigation, which ensured that they had a seat at the table.

Miller began negotiating with the largest banks and the federal regulators for a settlement involving robosigning and other assorted violations relating to debt collection practices. But Miller started negotiating without having done any investigation, which meant that he didn’t have any leverage on the banks.  When it leaked out that he was demanding something in the range of $20 billion for a settlement, many of the Republican AGs declared that the negotiations were a “shakedown” of the banks and walked out.

While $20 billion sounds like a lot of money, it isn’t actually that much when spread out over several banks.  Bank of America, for example, would gladly spend $5 billion to make its mortgage liability disappear.  The problem, however, was that the banks weren’t going to pay $20 billion to settle just robosigning. While illegal, it’s not clear that anyone was actually hurt by robosigning itself.  If the banks were going to shell out billions, they wanted a very broad release from the AGs covering all of their mortgage market wrongdoings.

Miller, however, couldn’t deliver such a deal.  Some AGs realized that $20 billion spread out over 50 states amounted to bupkis for their hard-pressed constituents.  ($20 billion works out to less than $2,000 per homeowner for each of those 11 million underwater mortgages. The average negative equity per loan is $65,000.)  On top of this, some AGs, like New York’s Eric Schneiderman and Delaware’s Beau Biden just are not willing settle on matters before an investigation is undertaken.

Frustrated by Miller’s inability to cut a deal, the federal regulators took matters into their own hands and entered into consent orders with the banks, in which the banks admitted no wrong-doing, but promised never to do it again.  The federal consent orders relieved some of the pressure on the banks to cut a deal with the AGs, and Miller’s  negotiations with the banks have dragged on since then. Every month, it seems, rumors emerge that a deal is on hand, only for no deal to be reached.  As things stand currently, the banks’ have offered an extra $2 billion to enable refinancing of mortgages with negative equity in exchange for a release of all claims relating the mortgage origination. Miller has countered with an offer of an extra $4 billion.  An extra $4 billion will result in meaningful help for perhaps 120,000 homeowners or one percent of the at-risk population.

There’s an element of the absurd in these negotiations. With a $700 billion negative equity problem, the AG’s are debating the difference between $22 billion and $24 billion. At best it’s naïve. At worst it’s an attempt to feign concern for homeowners and distract voters from a lack of engagement.

Robosigning was symptom of a much larger endeavor in reckless lending, in which cutting corners was the order of the day. When the prime borrower market was tapped out, banks simply loosened underwriting standards to keep expanding the pool of borrowers. Like a Ponzi-scheme, the rise in housing prices could only be supported by finding new people to put money in. Lower underwriting standards and exotic mortgage structures were the tools used to maximize profits that could be siphoned off before the Ponzi-scheme collapsed.

If one approaches the housing bubble as a prosecutor—as the AGs should—the major harm wasn’t the robosigning or associated servicing fraud. It was the pump-and-dump the banks did on the entire housing market. They recklessly inflated the housing prices and profited greatly from it. And the taxpayers, the government, and mortgage investors were left holding the bag. Fining the banks  $20 or 24 billion for robosigning and calling it a day just misses the point.

We need accountability for the entire financial crisis, not just for mundane consumer fraud. For Miller and the AGs to contemplate waiving the mortgage origination claims that were at the center of the crisis for an extra $4 billion without having even done an investigation is a blatant abuse of the public trust.  It’s another give-away to the banks.

The banks can afford to pay for writing down the mortgages from which they benefited.  Negative equity is a function of mortgages being held at face, rather than market value on banks’ books.  The book value of our major financial institutions is over $1.2 trillion, and that’s not counting Fannie Mae and Freddie Mac with their open-ended government support.  That means there’s plenty of ability for banks to take a write-down as a means of remedying the harm they have done.

It might cost the banks a quarter to a third of their book value to get rid of negative equity (Fannie and Freddie hold the majority of negative equity mortgages, which means the federal government is on the hook for part of the cost of eliminating negative equity), but the market already understands the much of banks’ book value is bogus.  Bank of America, for example, has a book value of $220 billion, but a market capitalization of merely $65 billion.  Investors understand Bank of America to have $155 billion in overvalued assets or unrecognized liabilities, and a substantial portion of that spread is because of negative equity.  Investors know that the $200,000 mortgage on a $150,000 house won’t yield $200,000 in most cases.

The framework for a settlement, then can’t be about settling robosigning claims a mere $20-$24 billion. Instead, the AGs should be pursuing a grand bargain—a global settlement deal structured around a broad release of the banks’ varied mortgage liability for origination, securitization, and servicing fraud in exchange for substantial write-downs of principal to whittle away the $700 billion in negative equity. Doing so will fix the economy and bring much needed accountability for the financial crisis.  It’s time to press the reset button and clear the market.