Occupy Oakland vs. the cops 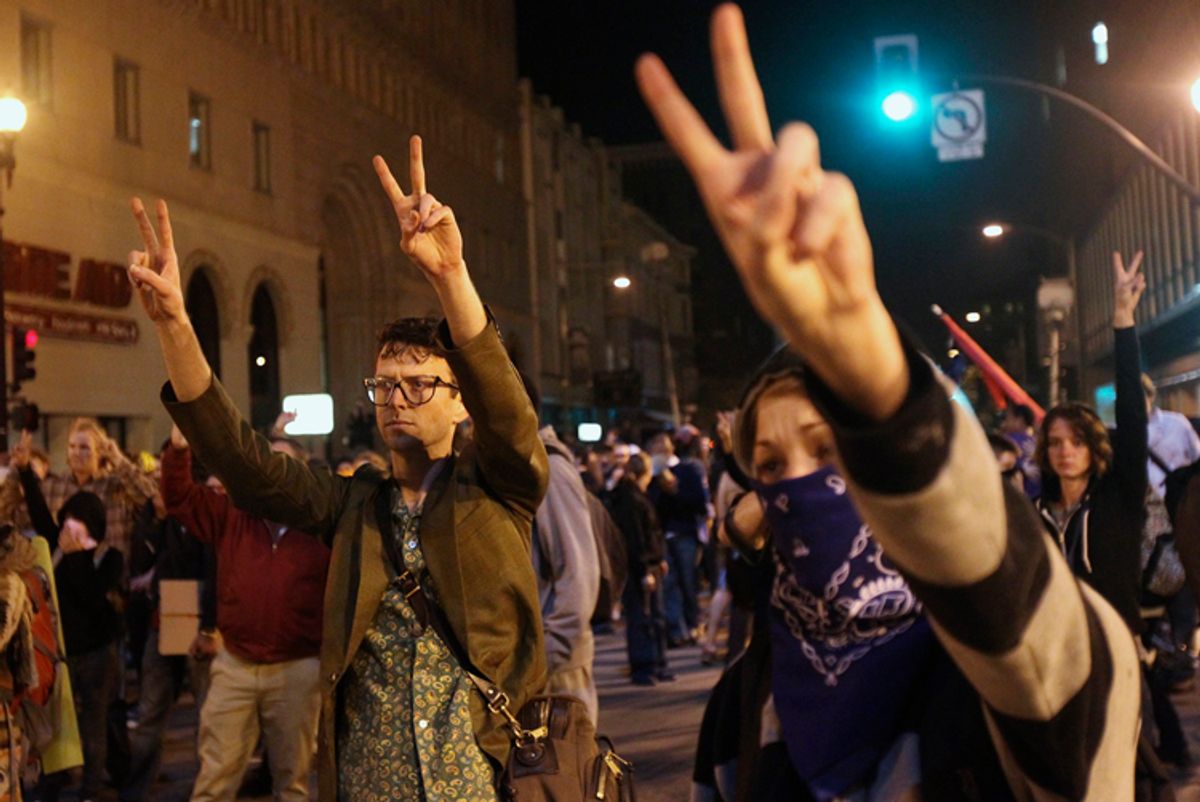 OAKLAND, Calif. – When several hundred protesters gathered in front of Oakland's City Hall Wednesday night in the wake of the previous night's police crackdown, enemy No. 1 wasn't Wall Street but rather law enforcement.

That isn't to say progress wasn't made in line with the larger Occupy Wall Street movement. By the end of the meeting, the crowd was able to approve a plan for a general strike  next Wednesday, the details of which will be hashed out during a meeting on Thursday. It took four hours of deliberation, extended debate in smaller groups, and countless "mic checks" on the movement's "human microphone" system, which amplified the sound coming from a lone set of speakers. And throughout the proceedings there were adrenalizing interruptions that brought to mind the chaos of the previous night.

First, it was a halfhearted attempt by a dozen or so men to tear down the fence erected by police after they cleared out the encampment at Frank Ogawa Plaza early Tuesday. Some 20 minutes later, during the meeting's open mic session, the battle over the fence began in earnest – before long, the entire structure, which snaked around the sprawling lawn in front of City Hall, was torn down. Television cameras followed a couple of the rowdier agitators through the crowd, while larger groups began calmly placing sections of the dismantled fence in neat piles. (Some people  discovered the pieces of the fence worked pretty well as makeshift trampolines: I spotted a 20-something hipster bouncing on one such pile while nonchalantly talking on his cellphone.) Later, as things calmed down, and several TV crews took off, someone set off two fireworks, which were unnervingly reminiscent of the cracks and pops the night before when police fired tear gas canisters into the crowd.

Cops were clearly the most controversial topic of the evening. When a speaker shouted, "Police are not the enemy," he was booed. This question of whether police are an adversary has arisen at other Occupy protests, but it's especially potent in Oakland, where anger and outrage has long brewed against law enforcement. Just two years ago, the shooting of 22-year-old Oscar Grant inspired massive protests against police brutality.

The issue was once again brought to the fore Tuesday by yet another aggressive response from the Oakland Police Department, which left 24-year-old Iraq veteran Scott Olsen in critical condition after he was allegedly hit in the head by a police projectile. As one woman said when she took the mic, "Some of us are angrier than others, and for good fucking reason!"

In smaller groups ringing the main crowd, similar debates took place about how cops fit into the OWS movement.

"When they're at home with their families, they're part of the 99 percent," a woman told a handful of protesters holding up a sign reading, "The Blood Is On OPD's Hands." A man in a ski mask starting yelling, "OPD killed three of my family members this year! Fuck the police! Fuck the po-lice!" Periodically, whispers spread through the crowd that "5-0 is on the block" or "the cops are closing in on us." But the only cops in sight were a dozen or so inside the nearby BART station – at least until the meeting transitioned into a late-night march through the heart of Oakland.

During a press conference earlier in the evening, Oakland Mayor Jean Quan promised a "light police presence" over the next few days to allow for "dialogue," but Tuesday's skirmish with police has already mobilized a whole new faction -- in Oakland and several cities nationwide that held protests in solidarity -- of people whose anger goes far beyond Wall Street.