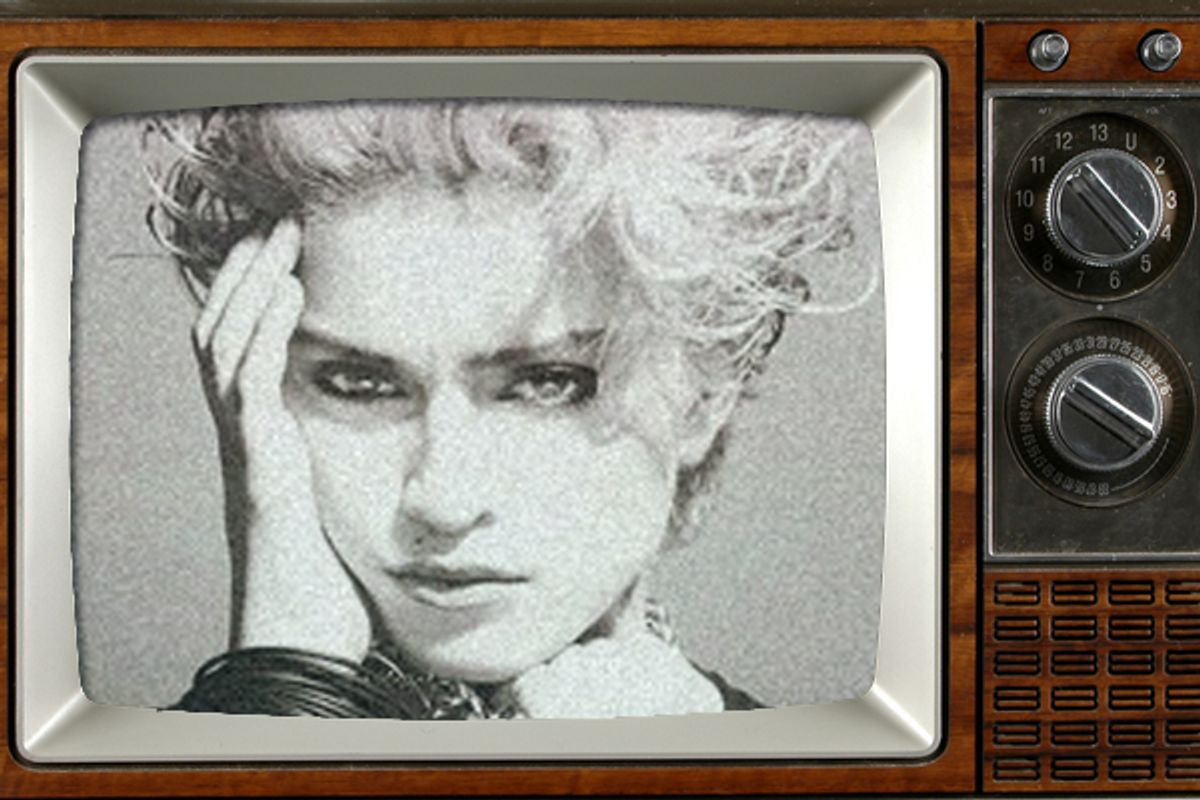 The following story is an excerpt from chapter one of Craig Marks and Rob Tannenbaum's new oral history of MTV, "I Want My MTV: The Uncensored Story of the Music Video Revolution."

BILLY GIBBONS, ZZ Top: One night I got a phone call from Frank Beard, our drummer. He said, “Hey, there’s a good concert on TV. Check it out.” So a couple of hours went by while I watched TV, and I called him back and said, “How long does this concert last?” He said, “I don’t know.” Twelve hours later, we were still glued to the TV. Finally somebody said, “No, it’s this 24-hour music channel.” I said, “Whaaaat?” MTV appeared suddenly — unheralded, unannounced, un-anything.

STEVIE NICKS, Fleetwood Mac: I was living in the Pacific Palisades and I would sit on the end of my bed, watching video after video, just stupefied.

DAVE NAVARRO, Jane’s Addiction: I was 14 when MTV came on the air. My record collection at the time consisted mainly of Black Sabbath and Led Zeppelin, and here I was being exposed to a cross section of hard rock, new wave and pop music. I still listen to Musical Youth every day. Okay, maybe not.

DAVE GROHL, Nirvana: It seemed like a transmission from some magical place. Me and all my friends were dirty little rocker kids in suburban Virginia, so we spent a lot of our time at the record store or staring at album covers. With music videos, there was a deeper dimension to everything. On Friday nights, you’d go to a friend’s house to get fucked up before going out to a party, and you’d have MTV on.

“WEIRD AL” YANKOVIC: I was living in a $300-a-month apartment in Hollywood with a Murphy bed and a tiny TV, but man, I wanted my MTV. It was a luxury for me to get cable TV. I would watch all day long. At the time, MTV felt like a local, low-budget station. The VJs would make glaring errors, or forget to turn off their mics. I mean, it was horribly produced and
great. I felt like, This is television for me.

JANET JACKSON: I loved watching it. How exciting back then, being a teenager and having something so creative, so fresh, so new. It was about waiting for your favorite video, and not really knowing what hour it would hit, so you’d have to watch all day long.

CONAN O’BRIEN: I was a freshman in college and a friend of mine was staying at her grandfather’s apartment in New York. She said, “Come over and hang out.” When I got there, she said, “I’m watching this new thing, MTV.” What a weird thing. What do you mean, they’re showing music videos? What’s a music video? Why would you show that? I can’t stop
watching! We watched for six hours. It’s one of those things you can’t describe to anyone who’s younger than you, like the first year of "Saturday Night Live." It was like a comet streaking across the sky.

DAVE MUSTAINE, Megadeth: My mom moved out when I was 15, so I’d been living alone in my apartment for a few years. People would ditch school, come over, buy pot from me and watch MTV. I’m telling you, man, I had the coolest house in the town.

LARS ULRICH, Metallica: I lived with my parents, and we didn’t have cable TV. We had three channels, and PBS. Dave Mustaine was a couple years older, and he had cable. And as I’m sitting here now, I can clearly see his apartment. In the right-hand corner, under the window, there was a wood-cabinet television and it was tuned to MTV 24/7.

LENNY KRAVITZ: The first time I saw MTV, I was on vacation with my parents in the Bahamas. They had MTV in the hotel we were staying at. It was beautiful outside, 80 degrees and sunny, and I spent the whole week in my hotel room, watching MTV. My parents were like, “My God, what is wrong with you?” I did not want to come out. I just wanted to watch videos all day. Duran Duran, Prince, Hall & Oates, Bowie’s “Ashes to Ashes,” Talking Heads, Bow Wow Wow, Haircut 100, Adam & the Ants. That’s when MTV was MTV. God bless MTV, but it ain’t MTV no more.

LADY GAGA: The ’80s was such a magical time. We’d just come off Bowie’s ’70s glam rock, and disco was spiraling into this incredible synthetic music. Everything was so theatrical. Once the video was born, all these visuals found a new medium.

PATTY SMYTH, Scandal: I remember watching MTV at my boyfriend’s house in Gladwyne, Penn., in the summer of ’81. A year later, I was on it.

PAT BENATAR: I was in a hotel in Oklahoma, just this little roadside motel, and it was one of only about eight places in the United States that actually had MTV on the day that it aired. We were all sitting on my bed — the whole band, my manager, everybody — with our mouths open. I’m telling you, within a week, we couldn’t go anywhere without being
recognized. It changes everything, in one week.

AL TELLER, record executive: The timing of MTV was perfect. The music industry was in the doldrums and trying desperately to reinvent itself.

CHRIS ISAAK: I had a TV that was from, like, 1959, a portable with rabbit ears and tinfoil. I got two and a half channels, and MTV was not one. My buddy was a photographer for the San Francisco 49ers, and it was a big treat when I went to babysit his kid, because I could watch MTV. At first, it was almost underground or counterculture. I don’t think people had
gotten to the payola yet.

BRET MICHAELS, Poison: I was 18 or 19, working as a fry cook and maintenance man, and singing in a covers band. We got cable just so we could watch MTV. I’d go to parties, and girls would ask me, “Why are you watching the TV?” I’d say, “I’m waiting for Van Halen.” I’d sit there with a little smokage and wait for their video to come on.

MICHAEL IAN BLACK, comedian: We did not have cable. Cable was for millionaires. I grew up in Hillsborough, N. J., a terrible place, but there was a local UHF station, U68, that hopped on the MTV bandwagon. If the weather was clear and the antenna was pointed just so, we could watch videos on U68. It was a ghetto MTV.

CHYNNA PHILLIPS, Wilson Phillips: I saw MTV the first day it aired. I was in New Jersey, visiting my dad, and our friend had MTV. We all crowded around the TV, and “Video Killed the Radio Star” played. I was hooked.

DAVE HOLMES, MTV VJ: I grew up in St. Louis, and when I was 10, somebody told me there was gonna be a thing called MTV and it was just gonna show music videos. First of all, I didn’t believe them. And second, I thought, If that’s true, it’s the greatest thing in the world.

B-REAL, Cypress Hill: I think it was the greatest invention ever.

RICHARD MARX: I spent a ton of time watching MTV. I’d set my VHS machine to extended-play mode, to get six hours on a cassette. I videotaped midnight to 6 A.M., because they’d play videos overnight that they wouldn’t play during the day. I was studying it as well.

SEBASTIAN BACH, Skid Row: I’m from Canada, where there was no MTV. Every summer, my dad would send me and my sister to California to be with my grandma. I went to my cousin’s basement, put on the TV, and saw the Scorpions on fuckin’ television. I was a huge heavy metal fan, and I couldn’t believe my cousin had the Scorpions on his TV set! I didn’t leave the basement all summer. His parents said, “Are you okay? Do you do this at home?” I’m like, "I’ve never seen music videos, so you’ve got to leave me alone.”

CHUCK D, Public Enemy: These days, everybody has a hi-def camcorder in their pocket. It’s accepted with shrugging shoulders. “Okay, so what? A video.” But back then, it was a main event.

RUDOLF SCHENKER, Scorpions: We came on an American tour in 1982 and I exactly remember every night coming from the concert into the hotel. I went in the room, switched immediately MTV on. It was so fantastic.

NANCY WILSON, Heart: Everybody wanted their MTV so bad. I remember craving it like crazy.

ANN WILSON, Heart: It was like the difference between silent films and talkies. All of a sudden, records could be seen. You could just put it on and party around the TV.

JANE WIEDLIN, Go-Go’s: It was the go-to place to find new music, and you could find out right away what you need to know about a band, like if you liked their style or if they were cute.

STEVIE NICKS: When “Video Killed the Radio Star” came out, we took it with a grain of salt. We thought, Well, video’s not gonna kill the radio star. It did. The song was prophetic.

Excerpt from I WANT MY MTV © 2011 by Craig Marks & Rob Tannenbaum. Published by Dutton, A Member of Penguin Group (USA) Inc. Excerpted with permission from the publisher. All Rights Reserved.

Rob Tannenbaum is the co-author of “I Want My MTV: The Uncensored Story of the Music Video Revolution.” He tweets @tannenbaumr.