The Texas governor, disappointing the Sons of the Confederacy, says he doesn't want to "reopen old wounds" 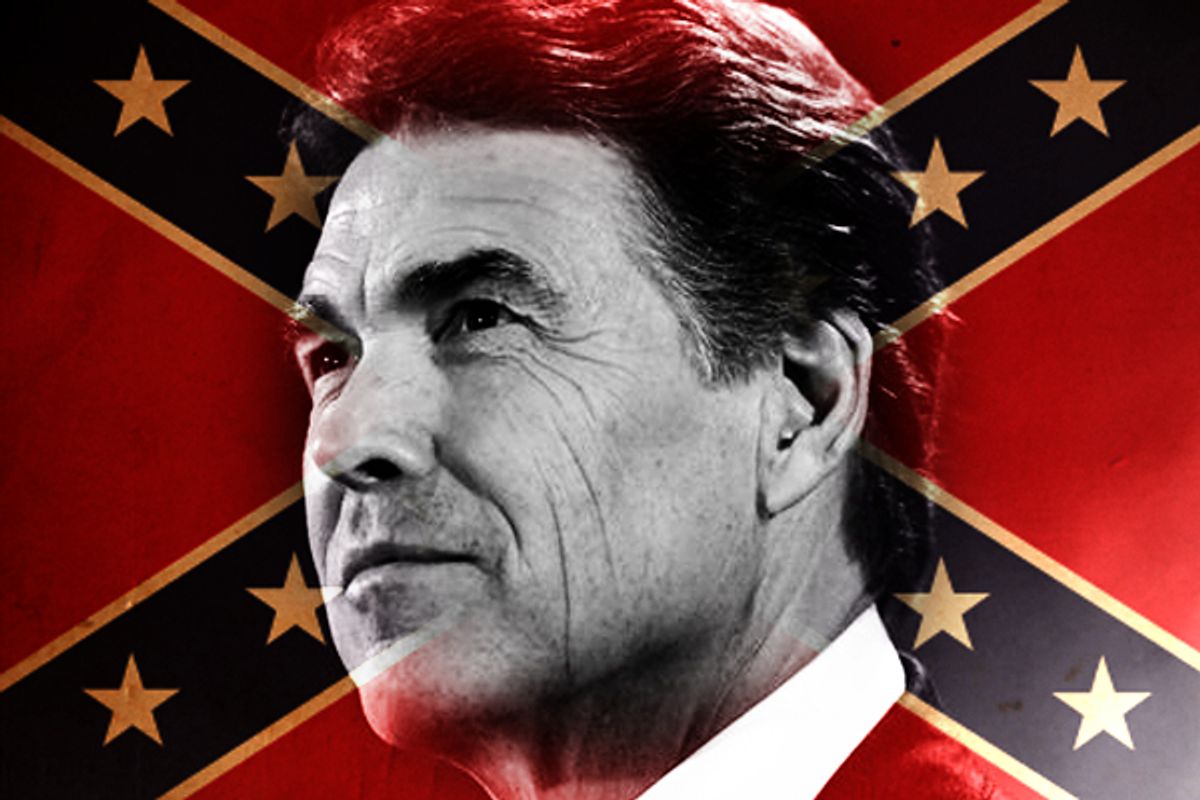 Texas governor and teenage heartthrob Rick Perry has a history of politically expedient affection for the Confederate States of America, but he has apparently now decided that public displays of the Confederate battle flag should probably not be endorsed and promoted by the government of the Civil War-winning United States.

According to the AP, Perry said he doesn't support a campaign (mentioned by Joan Walsh earlier this week) by the Sons of Confederate Veterans to introduce specialty license plates featuring an unambiguously hateful symbol of white supremacy.

The Republican presidential hopeful was in Florida for a fundraiser and told Bay News 9’s “Political Connections” and the St. Petersburg Times that, “we don’t need to be opening old wounds.”

The actual decision on the plates will be made by a Texas Department of Motor Vehicles board, but the board -- like most boards in the Texas government -- is made up entirely of Perry appointees.

This is something of a "flip-flop" for Perry, who in the past opposed efforts to remove Confederate symbols and monuments from public property. Perry likely wants to avoid another round of headlines connecting him to the South's ignominious history of white supremacy and racial tension, following the "rock with the word 'Niggerhead' painted on it" story. This is why white Southern Republican politicians use vague language like "reopening old wounds" -- it's best to just let that shit stay buried, where it can't embarrass anyone.

But the fact that it'd be embarrassing for Perry to endorse the Confederacy is something of a positive sign. For years, Republicans seeking the presidency have been expected to embrace Confederate symbolism to prove their conservative bona fides, and the political press largely excused these endorsements as simply part of the path to the nomination. John McCain got some grief for endorsing the South Carolina flag, but that's because he waffled on the issue, not because embracing the battle flag of anti-American racist separatists is morally horrific.

The fact that Perry would rather quietly make the issue go away than quietly signal his approval of the neo-Confederate movement means progress is being made in the campaign to educate everyone as to the actual meaning of certain symbols of "our heritage."