And no wonder: He's fallen about 30 points since he started participating in them. Now he's threatening to boycott 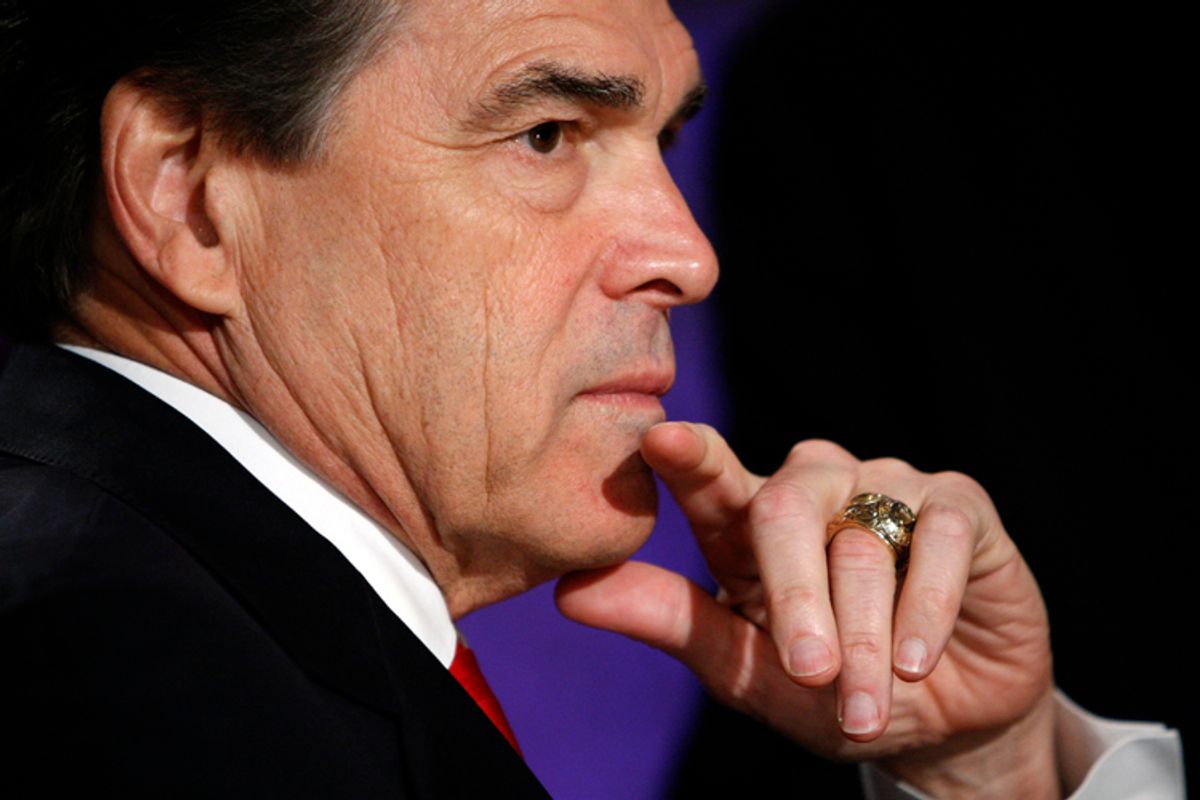 The four most recent national polls before Rick Perry's first debate as a Republican presidential candidate back on Sept. 7 showed the Texas governor in first place with 38, 26, 36 and 29 percent of the vote. Today, five underwhelming to appalling debate performances later, the four most recent surveys give Perry 13, 13, 6 and 10 percent -- good for somewhere between third and fifth place.

So you can probably understand why Perry told Bill O'Reilly this week that it was "a mistake" to participate in the debates, which he claimed are "set up for nothing more than to tear down the candidates." And you can probably understand why Perry's campaign is now suggesting that he will skip at least some future debates. "I think all the campaigns are expressing frustration right now," one of his spokesmen told Politico. "We said we would do Michigan but the primaries are around the corner and you have to use your time accordingly." Another Perry flack put it this way on CNN Wednesday night: "There have been eight Republican debates, we've done five. There are somewhere around 18 debates pending. There is no way to do all of them, particularly as the elections are rapidly approaching in Iowa and New Hampshire." (There are seven currently scheduled between now and the January 3 Iowa caucuses.)

But will ducking debates really help Perry -- or could it just make his problems worse? My guess is the latter, for several reasons.

One is that this year's debates have been unusually significant. Television ratings have been astronomical by presidential primary standards, and much of the GOP race's absurd polling volatility can be traced to perceptions of debate performances. This speaks to the unsettled nature of the Republican field; interest in the '12 race is high among the party's voters, and minds haven't been -- and still aren't -- made up. By skipping debates, Perry would be missing a chance to make his case to perhaps millions of engaged Republican voters. He'd also risk marginalizing himself in their minds, since it's hard to see any of his opponents joining him in any boycott; the debates would still attract sizable television audiences. And how would it look if the other candidates vying with Perry to emerge as the default non-Romney choice used the debate to bemoan his absence? It's really a shame that the governor of Texas didn't want to come here tonight and answer questions about a flat tax plan that's good in principle but troubling in its details...

One of the reasons there's been so much interest in this year's debates, I suspect, is because Republicans are so fixated on the supposed power of Barack Obama's communication skills. Nominating a competent, persuasive communicator who can think quickly on his or her feet is unusually important to them, and debates seem like the perfect testing ground. Thus, Perry's woeful outings have helped reduce him to also-ran status, at least for now. To back out of debates now would only reinforce the perception that he's just not equipped to go toe-to-toe with Obama on the general election debate stage.

If Perry had performed well in the past five debates and was the clear front-runner now, he could probably get away with dodging them in the future. Instead, he faces a Catch-22: It will look pretty bad if he starts skipping them -- but it could look just as bad if he participates.