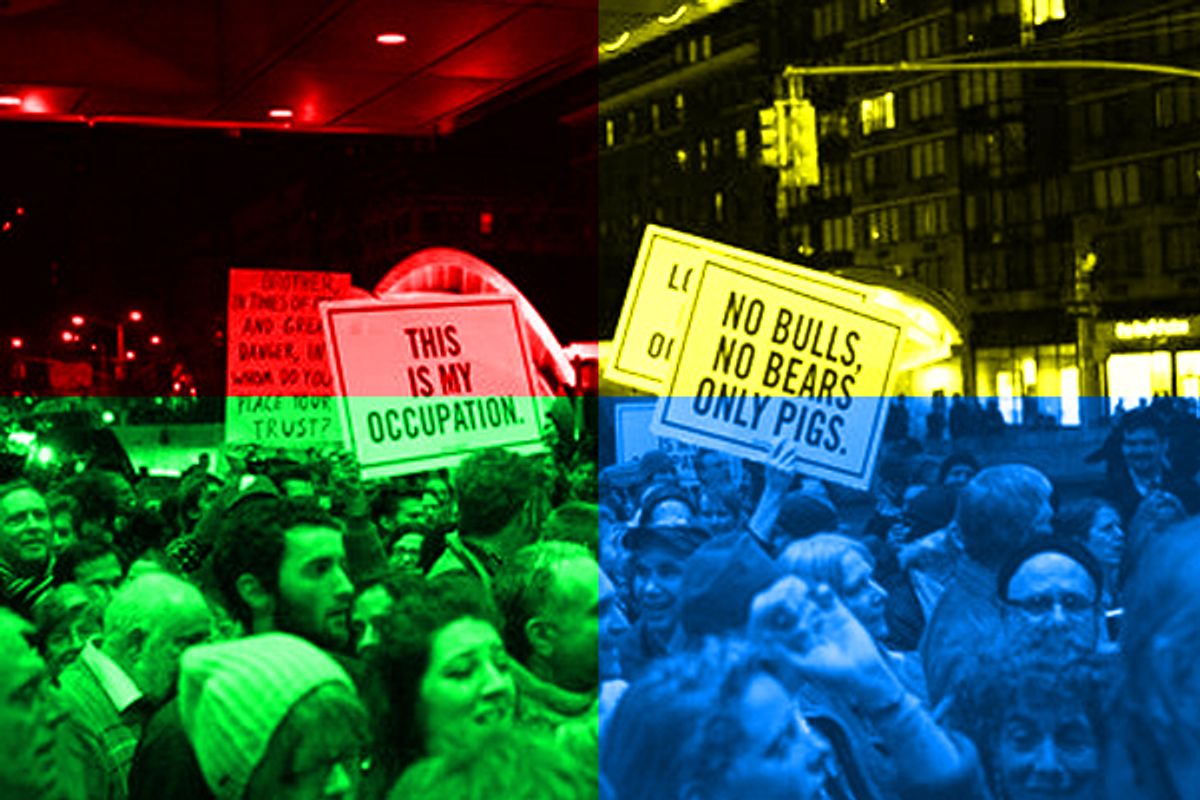 After a little more than a month of explosive growth, there's a growing sense that Occupy Wall Street is at a crossroads.

"The first phase of this movement has peaked. And now it gets interesting," says Kalle Lasn, editor of Adbusters, the magazine that issued the original call for a Sept. 17 protest on Wall Street. "The original magic of some of those general assemblies is wearing a little thin in some -- though not all -- places. And winter is coming. People are wondering whether they want to hang around for three hours talking about protocol."

With its decentralized structure, it's impossible to predict where the Occupy movement might end up. But we can at least identify the questions that will determine its future.

Can the movement move from tactic to strategy?

Michael Kazin, a historian of left movements, argued in an interview with Salon this week that the occupation of public spaces to bring attention to economic injustice and corruption on Wall Street is at heart a tactic -- one that has been remarkably successful. Can Occupy now shift to a broader strategy for effecting change?

The answer to that question depends on what sort of change Occupy wants to accomplish, which is itself not a settled issue. Adbusters' Lasn predicts the movement will go in a variety of directions. "I believe the movement will break up into components and there will be myriad projects bubbling up from the grass roots," he says. He imagines campaigns centering on a variety of legislative goals designed to address economic injustice -- or even the creation of a third party in America.

Brian Kelly, a New Yorker who has been working on the facilitation committee at Zuccotti Park, argues that it's important to stress what Occupy has already achieved.

"The first thing to say is, and it needs to be repeated and articulated well, is that something has already been accomplished that is very important. Three months ago these conversations were not happening," Kelly says. "Suddenly our corporate world starts to look a little more vaporous than it did a few months ago."

Going forward, one key thing to watch is how well existing progressive groups -- especially labor unions -- can partner with Occupy to pursue existing goals. These partnerships are already beginning to form, for example in the campaign to extend the millionaires' tax in New York.

In New York, there is also an Occupy demands working group that bears watching. It continues to engage in intense discussions about potential demands that will ultimately be brought before the general assembly for a vote.

Can Occupy's decentralized structure be effective in the long term?

There are already concerns in New York that the model of a general assembly -- composed of anyone who happens to be present in the park on a given night and making decisions by consensus -- does not scale up. Occupiers spend many hours every night on sometimes trivial decisions like whether to appropriate a few hundred dollars to an art project.

There is a structure working group and a proposal for a so-called spokes council that would complement the general assembly (see the proposal here). If it is adopted -- and there's no certainty that it will be given the hostility of some occupiers to anything that smacks of representation -- it could streamline the movement's decision-making process, at least in New York.

Kazin, the historian, also argues that leaders, in one form or another, will have to emerge if Occupy is to become a real, sustained political force.

Will the occupations survive the winter?

There are as many fronts in this battle as there are occupations. The overwhelming displays of police force in Atlanta and Oakland, Calif., likely spell an end to the sustained presence of protesters in public spaces in those cities.

In New York, protesters face a punishing winter. But they also have hundreds of thousands of dollars in donations, and, the Daily News reports, are stocking up on supplies:

The Daily News was given a peak inside occupiers' storage space at 52 Broadway and saw shelves lined with blankets, sub-zero sleeping bags, heavy coats, cough syrup and even an assortment of herbal teas.

There is also the unsettled question of how long the Bloomberg administration and Brookfield, the large real estate company that owns Zuccotti, will allow protesters to stay. Several days ago Bloomberg promised more arrests. A spokeswoman for Brookfield says the company has no further public comment right now on its position on Zuccotti.

Another player in all this is the community board in lower Manhattan, which has gotten lots of complaints about noise from neighborhood residents. This week, the board passed a resolution calling for, among other things, a limit on drumming in Zuccotti to two hours a day. The occupiers will have to work to maintain good relations with the local community; if they fail, they will be handing City Hall an excuse to clear the park.

Can public and media interest be sustained?

Occupy Wall Street accounted for 10 percent of the mainstream media's news coverage in the week of Oct. 10-16, according to Pew. That's a remarkable accomplishment for a movement that was then less than a month old. But the mainstream media has a notoriously short attention span. In the week of Oct. 17-23, Occupy accounted for just 4 percent of news coverage -- a drop that could partly be attributed to the death of Moammar Gadhafi.

Some within the movement argue it doesn't matter.

"[I]f the MSM losses interest, all the better [in my humble opinion]," writes organizer Justin Wedes in an email. "Most of them are intent upon delegitimizing us now. And we have our own indie media that is growing every day."

While that may be true, there are also signs that growth in public interest -- measured by Micah Sifry in Google searches and "likes" of Occupy Facebook groups -- is slowing.

To force the media -- and the public -- to stay interested, occupiers will have to show both durability and creativity. Part of that can be accomplished by simply maintaining physical occupations in harsh conditions (like winter or repeated police raids). New tactics will also help. There is work being done on both these fronts, of course. The Yes Men, for example, have been helping to train occupiers to think about attention-grabbing protest actions.

Finally, it's worth noting the New York Times poll that found that 29 percent of Americans had heard little or nothing about the protests. That's almost one-third of the country that Occupy can still reach.