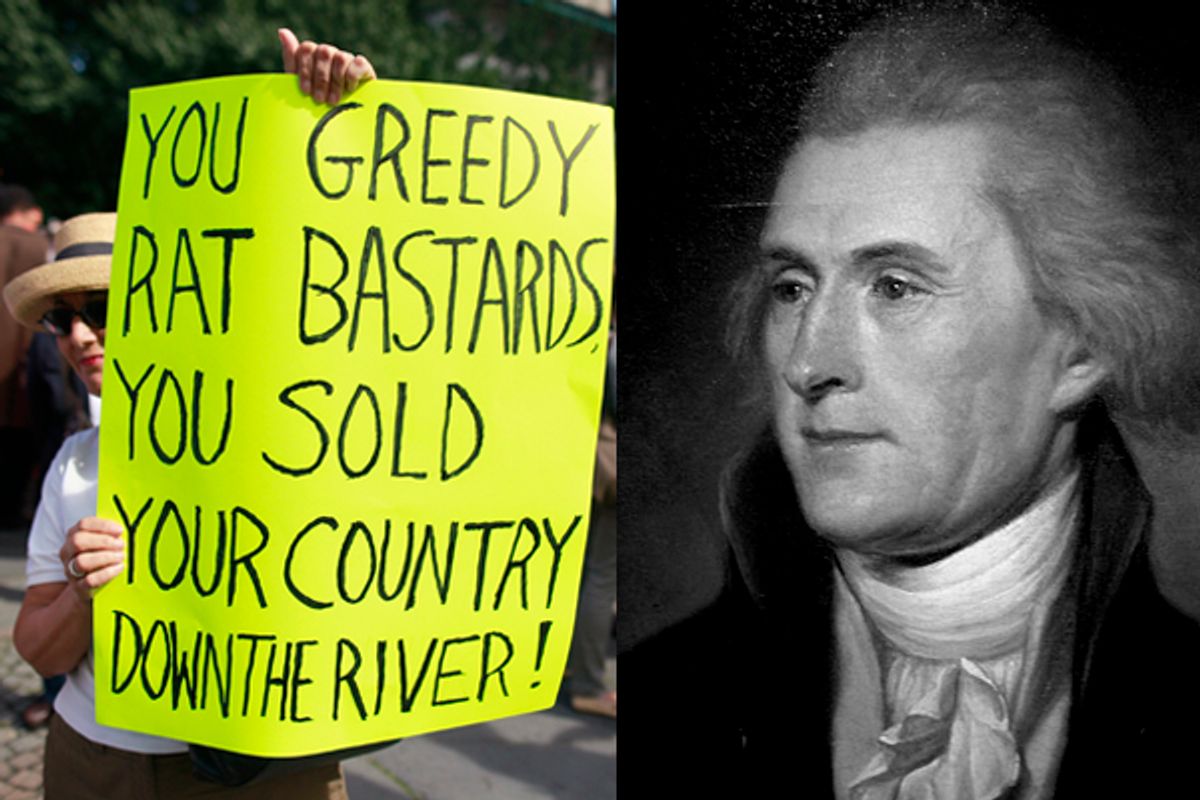 The Tea Party and the Occupy Wall Street movement have more in common than they realize. Patriotic followers of the Tea Party exalt the vision and courage of America's founding fathers. The common element uniting the diverse interests of Occupy Wall Street is rage against greed and corruption within the banking industry.

In fact many icons of the American Revolution were worried about the same thing and battled mightily against the unfettered power of the banks more than 250 years ago -- a struggle that continues to this day.

Even before the Declaration of Independence, the passage of an obscure British law called the Currency Act of 1764 was a major colonial grievance that contributed to the American Revolution. This law prohibited American colonies from issuing their own legal tender and was seen as an effort to lock the colonies under the monetary control of the Bank of England. Benjamin Franklin was a colonial agent in London at the time and lobbied strenuously to have the law repealed.

Following the American Revolution, the founding fathers struggled with how to pay off the war debt and hotly debated whether to allow a privately held central bank to issue and control the American money supply -- the model that exists today under the U.S. Federal Reserve.

Thomas Jefferson vs. "the most deadly hostility"

Thomas Jefferson, author of the Declaration of Independence, strongly opposed the legality of what became known as the First Bank of the United States, which was majority (and later wholly) owned by private investors. Among his many statements against the bank, Jefferson warned: "[The] Bank of the United States... is one of the most deadly hostility existing, against the principles and form of our Constitution."

While Jefferson was an iconic champion of small government, he knew that divesting monetary authority to private interests may saddle the U.S. taxpayer with perpetual debt and leave the government beholden to powerful financial interests: "Bank paper must be suppressed, and the circulating medium must be restored to the nation to whom it belongs."

Pointing out the poor business case of outsourcing the money supply to private banking interests, Jefferson calculated that over a 20-year period, half of the revenue collected by the government would be siphoned off in interest payments: "It is literally true that the toleration of banks of paper discount costs the United States one-half their war taxes; or, in other words, doubles the expenses of every war. Now think but for a moment, what a change of condition that would be, which should save half our war expenses, require but half the taxes, and enthrall us in debt but half the time."

Jefferson was not alone in his concerns. James Madison, the primary author of the U.S. Constitution, also believed the national bank proposal was illegal, as did Attorney General Edmund Randolph. However, their rival Alexander Hamilton prevailed on President George Washington in 1791 to sign a charter for the bank for 20 years, which expired in 1811.

Andrew Jackson vs. "a den of vipers and thieves"

Modeled after its predecessor, the Second Bank of the United States was a privately held corporation that enjoyed the enviable position of being the sole depository of U.S. government revenue. It was also the sole issuer of U.S. currency, which it lent at interest to the U.S. government in exchange for Treasury Bonds.

This model -- like today's Federal Reserve -- is seen by many observers as a perpetual public debt machine. Any new money printed is exchanged for promissory notes from the U.S. government. The interest charged by the central bank for new legal tender is ultimately paid through taxation on the U.S. public, who may believe their money is going toward public works and services when it may instead be shoveled out the back door to the private interests who profit handsomely from this deceptive arrangement.

The charter of the Second Bank of the United States was due to expire in 1836, but their directors applied for renewal four years early in hopes of thwarting opposition from then President Andrew Jackson -- a fierce opponent of the Bank. "Old Hickory," as he was known, told a visiting delegation of Philadelphia bankers, "You are a den of vipers and thieves. I have determined to rout you out, and by the Eternal, I will rout you out!"

In what became know as the Bank War, Jackson vetoed renewing the charter in 1832, stating that "some of the powers and privileges possessed by the existing bank are unauthorized by the Constitution, subversive of the rights of the States, and dangerous to the liberties of the people."

He also conducted an investigation of reports of widespread corruption by the bank and concluded "beyond question that this great and powerful institution had been actively engaged in attempting to influence the elections of the public officers by means of its money."

To finally finish off his powerful foe, Jackson issued an executive order in 1833 halting federal deposits into the bank and diverting federal money to a number of state chartered banks. Jackson had to fire two treasury secretaries who refused to carry out the order. He was threatened with impeachment and survived the first attempt to assassinate a sitting president. The bank's president, Nicholas Biddle, then engineered a financial crisis by calling in loans across the country, but the bank eventually lost its charter in 1836 and went bankrupt in 1841. No U.S. central bank existed for another 72 years.

Abraham Lincoln vs. the war profiteers

The next iconic president to battle the banks was Abraham Lincoln, who struggled to find a way of funding the Union effort in the American Civil War. The financiers of the day offered to lend the government funds at interest rates in excess of 20 percent. Lincoln's novel response was to spurn their money and, for the first time, have the U.S. government instead issue its own interest-free currency -- nicknamed the greenback due to the olive ink used to print the new bills.

The National Banking Act of 1863 also instituted a hefty tax on the chaotic patchwork of local bank notes that prevailed at the time, driving the U.S. toward a single national currency under the control of the U.S. government.

By the early 20th century the banking industry was again mobilizing in the wake of the financial crisis of 1907. In 1910, a secret meeting of the nation's wealthiest bankers was convened on a private South Carolina island to draft a plan that eventually resulted in the third U.S. national bank -- the current Federal Reserve Bank. According to an account by B.C. Forbes some years later:

"Picture a party of the nation's greatest bankers stealing out of New York on a private railroad car under cover of darkness, stealthily riding hundreds of miles south, embarking on a mysterious launch, sneaking onto an island deserted by all but a few servants, living there a full week under such rigid secrecy that the names of not one of them was once mentioned, lest the servants learn the identity and disclose to the world this strangest, most secret expedition in the history of American finance. I am not romancing; I am giving to the world, for the first time, the real story of how the famous Aldrich currency report, the foundation of our new currency system, was written."

Theodore Roosevelt vs. "an invisible government"

Meanwhile a high-profile congressional hearing concluded there was widespread criminal collusion within the American financial sector. Theodore Roosevelt gave voice to rising anger against the rise of corporate power in America in a 1912 speech:

While the Democrats under Woodrow Wilson had campaigned against setting up a U.S. central bank, the Federal Reserve Act was passed by Congress on Dec. 23, 1913, and signed into law the same day.

Like previous U.S. central banks, the Federal Reserve Bank is essentially a privately controlled cartel that issues money at interest to the U.S. government. It was not long before voices began to be raised against "The Fed." According to a 1932 speech from Rep. Louis T. McFadden, the chairman of the House Committee on Banking and Currency from 1920 to 1931:

"Some people think the Federal Reserve Banks are United States Government institutions. They are not Government institutions. They are private credit monopolies, which prey upon the people of the United States for the benefit of themselves and their foreign customers, foreign and domestic speculator sand swindlers, and rich and predatory money lenders."

Franklin D. Roosevelt was also no fan of the financial sector, stating in a 1933 letter to Col. Edward Mandell House: "The real truth of the matter is, as you and I know, that a financial element in the larger centers has owned the Government ever since the days of Andrew Jackson."

Even FBI head J. Edgar Hoover was wary of the increasing influence of banks, stating in 1955: "Banks are an almost irresistible attraction for that element of our society which seeks unearned money."

Since then, the erosion of government oversight in the American banking sector has continued apace. Banks scored an enormous victory over regulators in 1999 with the repeal of the Glass-Steagall Act -- an important law that had been on the books since 1933 and required a clear separation of commercial banking from the much more risky investment banking.

In recent years banks have become so powerful they apparently don't even feel the need to feign deference to federal regulators. After providing hundreds of billions in public bailouts to their colleagues at Bear Stearns and other reckless speculators, the Fed rejected a 2009 request from the U.S. Treasury for a review of the central bank's governance and structure. One candid trader stunned a BBC on-air panel last month by flatly stating, "governments don't rule the world, Goldman Sachs rules the world."

Given the power struggle between the U.S. government and powerful banking interests dating back to the days of the American Revolution, it is strange that Tea Party leaders such as Rick Perry now dismiss the Occupy Wall Street movement as "class warfare." Rather than join the battle against the banks stretching back to the days of Benjamin Franklin, the patriots of the Tea Party have unwittingly become a zombie army of the same corporate interests seeking to destroy the very institutions the Founding Fathers fought so hard for.

The widespread revolt against the excesses of wealthy financiers spreading across North America would be very familiar to the Founding Fathers. Iconic Americans from Thomas Jefferson to Teddy Roosevelt battled valiantly to protect the fragile notion of liberty against repeated and coordinated attacks from a corrupt and self-serving banking sector. In contrast, the milquetoast response by President Obama to the recent crimes of corporate America indicate just how enfeebled the U.S. government has become.

But hope springs eternal. More than two centuries on, the true spirit of the American Revolution is finding new life on the streets below financial towers across the continent. While the foe is formidable, these battles have been waged -- and won -- many times before.

If Tea Party followers would study their history, they would realize this patriotic fight is their own as well. Their ample energy and justifiable anger would be a welcome and appropriate contribution to this historic struggle.