The perpetual futility of a "grand bargain"

Yet again, John Boehner rejects a spending cuts/tax hike plan. What could budge the GOP from its absolutism? 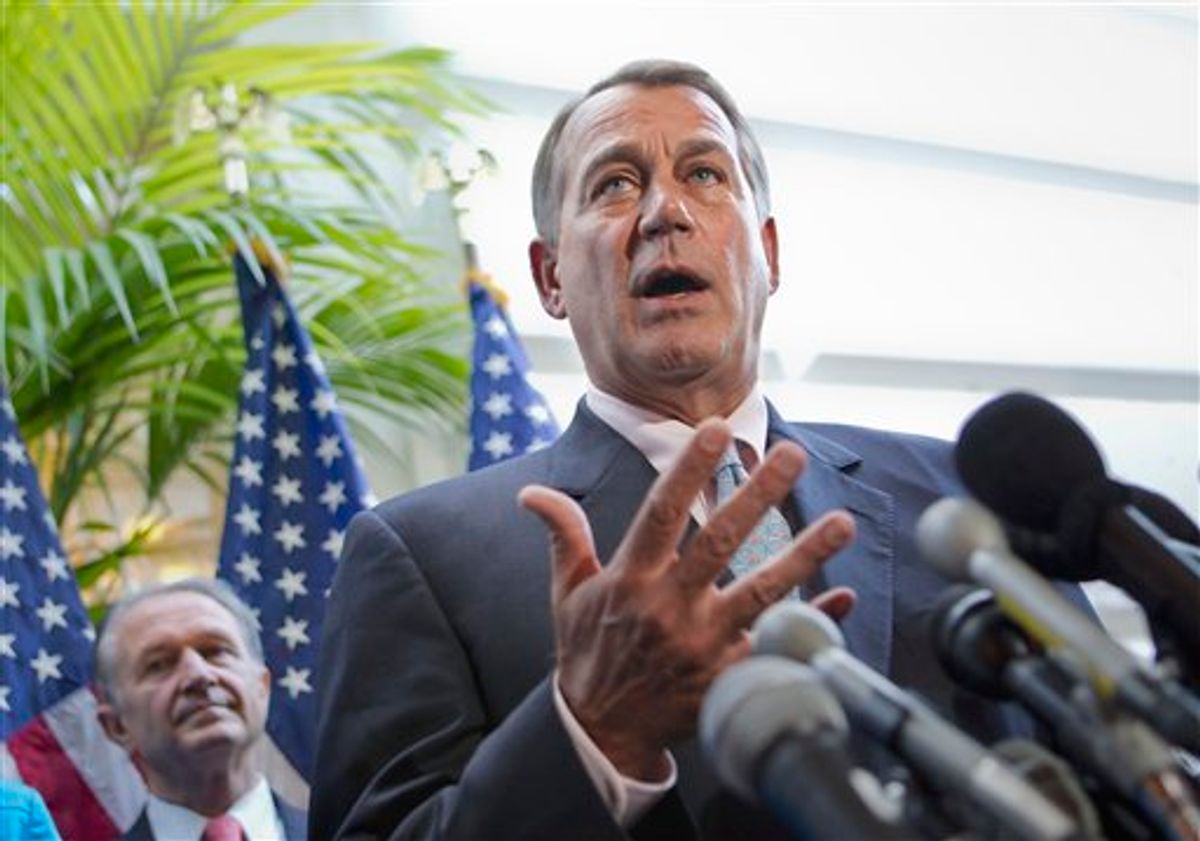 The congressional "supercommittee" has practically until Thanksgiving to strike a bipartisan deficit reduction compromise, but let's be realistic: There's not going to be a deal.

This week has been marked by a sudden burst of activity from the secretive panel, with Democrats presenting the broad outlines of a plan to cut around $3 trillion from the debt over the next 10 years through a combination of tax increases and spending cuts, including to Medicare and Social Security. Apparently, not every Democrat on the committee was on board with this, but a majority were, creating a theoretical opening for a compromise with the GOP. Republicans then responded with a less ambitious plan of their own, envisioning about $2.2 trillion debt reduction through steeper social safety net cuts and no tax increases; instead, the GOP calls for $640 billion in "new revenue" from some increased fees and "dynamic scoring" -- meaning the extra tax revenue that Republicans insist will come in thanks to economic growth that a debt reduction deal would yield.

In other words, there's a fundamental difference between the two sides on taxes -- something that House Speaker John Boehner confirmed yesterday when he publicly rejected the Democratic plan and said its call for $1.2 trillion in new revenue is "not a reasonable number." If this feels familiar, it should, because the supercommittee isn't engaged in a negotiation nearly as much as it's performing yet another reenactment of the story that has defined the 112th Congress: Any substantial compromise with President Obama and Democrats -- particularly if it involves tax increases -- is absolutely out of the question for the Republicans who run the House.

This has been amply demonstrated several times now, never more dramatically than over the summer, when Obama -- who at the time still believed the GOP would meet him halfway (or at least, say, a quarter of the way) on Big Issues, and saw striking bipartisan deals as his path to reelection -- angered some of his fellow Democrats in an effort to entice Boehner and the GOP into a debt reduction "grand bargain." The president's offer: serious cuts in Social Security and Medicare in exchange for more tax revenue. Sound familiar? Just like now, Boehner pronounced Obama's offer unacceptable -- although only after an awkward weeks-long dance in which he seemed ready to deal, only to walk away when it became clear that a single cent in new tax revenue would be too much for the GOP congressmen at whose pleasure he serves.

The supercommittee grew out of that stalemate, with Obama and the GOP averting a debt ceiling default by setting up a panel to recommend at least $1.2 trillion in long-term debt reduction by Nov. 23 -- at which time automatic, Pentagon-heavy cuts would be triggered if there was no deal. But the bottom line hasn't changed since then, and there's no reason why it should have. Because Obama's poll numbers are so weak, Republicans believe they have a strong hand and feel no pressure to give in; but they do feel enormous pressure not to do anything that might arouse "sellout!" charges from influential conservative activists and commentators -- as acceding to a tax increase of any kind would.

So unless Obama and the Democrats want to accept a deal that is almost entirely skewed toward the GOP's demands, compromise is impossible. The real suspense now is probably over whether the spending cuts trigger will actually be pulled once Nov. 23 arrives without a deal -- or if both parties, fearful of the Pentagon's wrath, will devise some sort of workaround. And on and on like this it figures to go for the rest of this year and through the next one. What could break the cycle and force Republicans to back off their absolutist tax posture even just a little bit? The 2012 election may offer some hope.

If Obama manages to win reelection, he could earn something that has eluded him since he took office: a measure of respect, even if it's grudging and unspoken, from the opposition party. For nearly three years, Republicans in Congress have stood united against virtually everything Obama has tried to do, and they've been rewarded nicely: Ever-declining poll numbers for Obama, an epic midterm rout, and now the very real possibility that Obama will be defeated for reelection. At no point have they been faced with a measurable backlash that might force them to reexamine their behavior. But losing a very winnable election next year could have that effect -- especially if it seems that their own excesses scared swing voters into reelecting Obama. A good model for this might be the congressional Republicans of the 1990s who still resented (and impeached!) President Clinton during his second term, but who were also more willing to compromise with him legislatively than they had been early in his presidency.

More interesting, though, is the question of how Republicans might react if they win the White House next year. It's possible that this would simply usher in an era of Tea Party governance, with Republicans potentially controlling both houses of Congress too and responding to the same conservative activists and opinion leaders whose wrath they now fear.

But it's worth wondering how much of the GOP's current anti-tax adamance is a function of Obama being in the White House. After all, when their party has controlled the presidency, Republicans have shown much more flexibility on taxes (and, for that matter, stimulus spending during economic downturns). That Ronald Reagan, for all of his supply side convictions, raised taxes repeatedly as president is well documented. Given that Tea Party conservatism is mainly a reflection of how the GOP base responds every time a Democrat comes to power, then it seems possible the fervor will die down the minute Obama heads back to Illinois -- at which point the new Republican president might be able to sell his party-mates on the sort of deficit-combating tax increases they now bitterly resist.