Why does Bill Daley still have a job?

Just as the president gets his political footing, his arrogant chief of staff trips him up 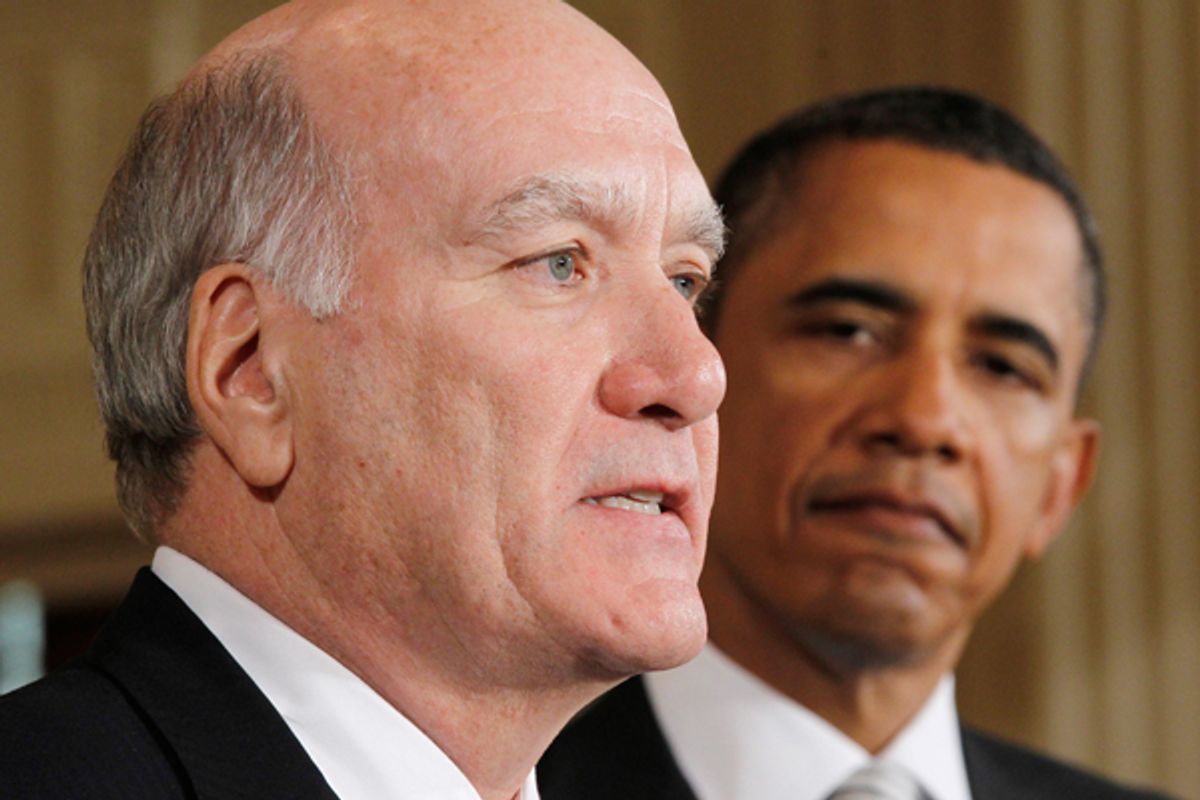 Politico's Roger Simon has an "exclusive" interview with White House chief of staff Bill Daley, and you really have to read it to believe it. It's a portrait of arrogant self-promotion. The piece is headlined, "Bill Daley, Unplugged." I hope that President Obama reads it, and decides to unplug Daley, for good. Yes, I know he has announced he's leaving after the 2012 election. That's not nearly soon enough.

Former chief of staff Rahm Emanuel was no slouch when it came to arrogant self-promotion, either. Remember when he was the obvious unnamed source behind two Washington Post puff pieces, "Why Obama Needs Rahm at the Top" and "Hotheaded Emanuel May Be White House Voice of Reason," at the height of the administration's early 2010 disarray? (If you don't have time to click the links, it's OK, the headlines say it all.)

But Daley has one-upped his predecessor by trashing him personally. He says Emanuel, now Chicago mayor, was "angling for something else" while he worked in the White House, was not that "beloved," and essentially calls him the administration's "leaker in chief."  I'd write it all off as inbred Chicago politics – Rahm succeeded Daley's brother Richie as mayor – except for the rest of the interview, in which Daley undercuts his boss at least as disrespectfully as Emanuel ever did.

At a time when Obama seems to have finally given up on trashing "Washington," to zero in on the way the GOP obstructs his agenda, the centrist Daley criticizes both parties equally. "On the domestic side, both Democrats and Republicans have really made it very difficult for the president to be anything like a chief executive," the former JP Morgan Chase executive says. And where other advisors describe Obama's recent attempts to bypass Congress and use executive office powers -- to bring Americans help on the foreclosure, jobs and student loan front -- as a way to get around a GOP that's been hijacked by the Tea Party, Daley describes his boss as trying to thwart Congress generally, not just conservatives. Daley's remarks are likely to incite wider congressional resistance to the president's new assertiveness than existed before.

My favorite part comes when Simon asks Daley how the White House keeps politics and policy separate. "They can be separate, yeah,” Daley says. “You can say, ‘Look, this may be good policy, but the politics of it may be shitty."  Simon asks which Obama will go for, and Daley's answer may well find its way into a 2012 GOP ad. “He’ll try to find that middle ground,” Daley says. "How close can we get to it being really shitty policy or really shitty politics but getting something accomplished?’" (For the record, Politico used dashes to denote the dirty words, but I think the quote is most honest if rendered the way Daley said it.)

That's a deeply stupid remark, but Simon plays it straight; in fact, the profile comes off as worshipful. The Politico veteran relates that Daley used to keep an old "Help Wanted: No Irish Need Apply" sign in his Chicago law office, as a typical Daley reminder, in Simon's words, "of where they came from and how far they have gotten." Oh please. Sure, generations back Daley is said to be descended from famine Irish, but where Bill Daley came from is a place of privilege: He is the son of perhaps the most powerful mayor in America.

Daley is a Democratic version of George H.W. Bush as described by the late Ann Richards: someone born on third base who thinks he hit a triple. He used his family background and political connections to take part in today's quintessential Democratic get-rich-quick scheme, corporate law and investment banking. It's always shocked me how a certain type of affluent Irish Catholic can excuse his work on behalf of the wealthy as long as he has a "No Irish Need Apply" sign in his office, which puts him on the side of the underdogs. Daley is an overdog who represents the interests of overdogs.

That was one reason he made a terrible choice to be Obama's chief of staff, but clearly he was chosen to send a message of reassurance to the Democratic Party's corporate donors. As the president tunes up his populist message for 2012, it's time for Daley to go. (I should note that a die-hard Obama defender, the blogger Karoli, came to this conclusion almost two months ago, after Daley utterly botched both the substance and the messaging of Obama's response to the debt ceiling crisis.) I liked the way Obama fired Gen. Stanley McChrystal after his arrogant, undermining remarks about Afghanistan in Rolling Stone. The president should see a strain of the same arrogance in Daley's sit-down with Simon.

Simon's "exclusive" made me think of the disturbing line from Ron Suskind's "Confidence Men," in which Suskind alleges that the most "pernicious and personal dilemma emerging from inside the administration" was that "the young president's authority was being systematically undermined or hedged by his seasoned advisers." Daley undermined Obama's new populist, partisan message in his self-promoting interview. The young president should send him packing.