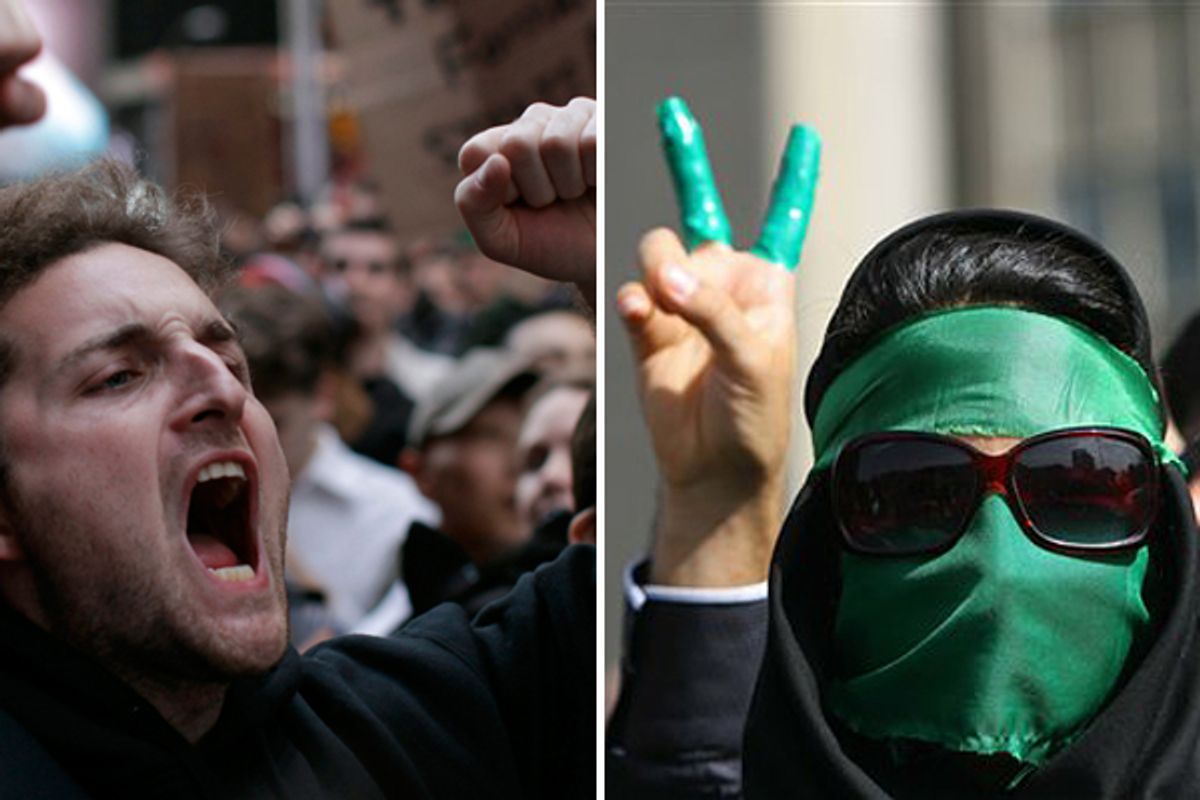 Occupy Wall Street protesters shout slogans during a protest at Times Square in New York. Right: Supporters of opposition leader Mir Hossein Mousavi, as they listen to his speech at a demonstration in Tehran on Thursday June, 18, 2009. (Reuters/AP)
--

The Occupy Wall Street protest, inspired in part by uprisings against corrupt power in Egypt and the rest of the Arab world, has in turn inspired protests nationwide and around the globe. International news outlets have been following the American demonstrations closely -- often more closely than American media outlets.

Pro-democracy protesters in Egypt marched to the U.S. Embassy in support of Occupy Oakland, in part to attract international attention for their cause by playing up the similarities between the story of Occupy Oakland police brutality victim Scott Olsen and the death of 24-year-old prisoner Essam Ali Atta at the hands of the military junta currently ruling Egypt.

But one nation's press in particular was an early and enthusiastic driver of OWS coverage: Iran. Recorded Future is a company that performs "predictive analysis" of events by monitoring Internet sources. (Its future-forecasting efforts are funded by both Google and the CIA.) After they made this neat visualization of the international spread of OWS-related demonstrations, Recorded Future analysts noted that according to their interpretation of media links, the biggest non-American media "influencer" in terms of OWS coverage was Iran's English-language Press TV.

Press TV is funded by the Iranian government as a news station presenting the regime's viewpoint (lots of countries, including the U.S., have similar international news stations). It has a London-based production company that has employed a number of antiwar British leftists as hosts and analysts. (Some contributors resigned after Iran's 2009 elections as the government crushed the protest movement.)

This is back in early October. Other international media outlets have likely stepped up their coverage since then. But why would the Iranian government-controlled press care so much about an American protest movement directed against major financial firms? For one thing, Press TV claims that the British bank NatWest was told by the American and British governments to freeze Press TV's London accounts. That would certainly inspire coverage of a popular movement against large financial firms.

Government-backed news outlets, of course, tend to cover popular political movements in ways that reflect the interests of the government. Press TV and other Iranian news outlets closely track and cover protests in Bahrain -- tying the Arab Spring to Iran's 1979 revolution -- while downplaying protests in Syria (or claiming Syria is beset by American meddling), because Syria is an Iranian ally and Bahrain is led by a Sunni royal family at odds with the Iranian government. They're covering the Occupy demonstrations using the same rubric.

And the American press got very, very excited about the 2009 Green Revolution in Iran. The Iranian regime painted the protests then as a cover for an attempt by the American government (led by George Soros and John McCain, naturally) to destabilize Iran. They're devoting this much ink to Occupy Wall Street as a cheeky sort of payback.

Of course, with America's right-wing media already rather desperate to paint the popular protest movement as being the "secret" work of nefarious actors like George Soros and ACORN, it's only a matter of time before the Weekly Standard "reports" that Occupy Wall Street was in fact organized and led by the Ayatollah.

Oh, wait, Glenn Beck's "Blaze" is already on it. As are more of the usual suspects.