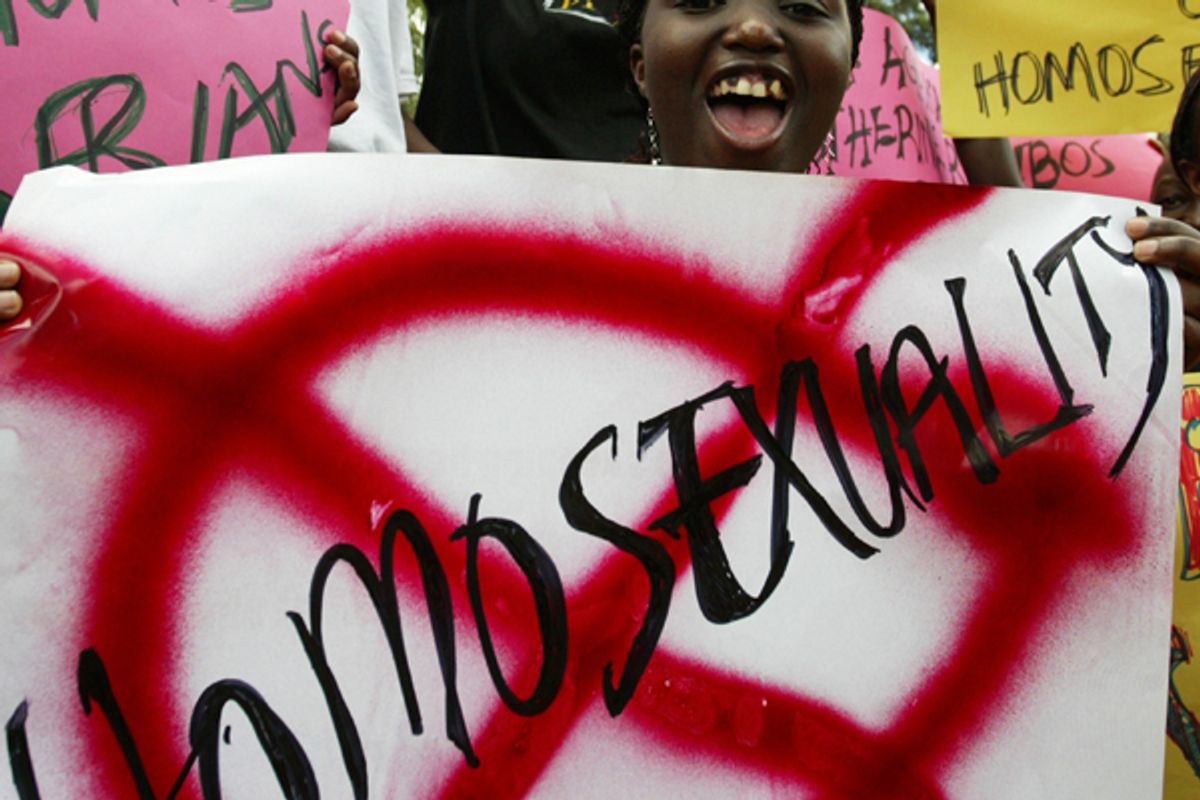 I first met Fred at a prayer service for gay men in an industrial part of Nairobi where even on a Sunday morning, the noise was deafening. The service was part biblical study and part support group. The other men who were worshipping with Fred in the dingy and cavernous room that day were Kenyans, but he was not.

Fred, a lanky Ugandan, became a refugee in December 2009 after he was brutally assaulted by a mob in Kampala for being gay.

Fred, who asked that his last name not be used, bought a one-way ticket to Nairobi days after the assault with the intention of never returning. “It’s OK to kill me,” he said. “People would be happy to see me dead, even some of my family.” I asked what he meant by OK, and he explained that no one would ever have to pay a price for his murder.

Within the last decade, rancorous anti-gay rhetoric has infiltrated public discourse in many African  countries. Just last week, the Ugandan parliament revived a proposal to legalize capital punishment for people who engage in homosexual acts. This is new for Africa. In the past, homosexuality was rarely brought up privately let alone in the public sphere. The new acrimonious tone against homosexuality espoused by politicians and religious leaders has percolated across all strata of African society including the media. It has also given rise to increasing homophobic and transphobic violence, which for a growing number of gay Africans has meant that life in their own countries has become untenable.

Fred’s journey from Uganda to Kenya followed the same logic as that of other Lesbian, Gay, Bisexual and Transgendered (LGBT) African refugees I spoke to. They move to urban centers in neighboring countries not necessarily because these places are any less hostile to homosexuals but for the anonymity that comes with being a newcomer in a densely populated area.

Navi Pillay, the U.N. High Commissioner for Human Rights, went on record last May saying that anti-gay hate crimes are increasing around the world and now account for a high percentage of all reported hate crimes.

Homophobia is not necessarily a new attitude for most African societies. Being gay is a crime in 38 of the 54 countries in Africa. Many of these laws have been on the books since colonial times. But it’s a stretch to think, as some have claimed, that homophobia is simply a vestige of colonial times.

However, some pundits believe that the shift to a more sinister form of homophobia in many African countries over the last decade has its root in conservative religious indoctrination. Some reports suggest that U.S. evangelical groups have had a hand in creating the venomous anti-gay attitudes and violence that have swept over the continent and pushed gay Africans out of their countries.

“It wasn’t until the late 1990s that we saw Africans with the help of American conservative religious groups using this issue (homosexuality) as an organizing tool,” said Rev. Kapya Kaoma, an Anglican priest from Zambia who has studied the U.S. evangelical influence on African societies.

Fred, who looks a decade or so younger than his 48 years, said that for most of his life he had guarded his sexuality with the utmost care for fear of social retribution and becoming estranged from loved ones. He lived his life relatively undisturbed until 2009 when the “Kill the Gays” bill, which sought to legalize capital punishment for homosexuality, was first introduced. Fred says it was during this time that he started to fear for his life.

His neighbors began to suspect he was gay and threatened to turn him in to authorities or to kill him themselves. On the night of his near fatal assault, he says, a large group of people from his neighborhood stood outside his bedroom quietly waiting to get the final proof they needed to confirm their suspicions. When they had heard enough, they broke his window and attacked him and his partner.

“People don’t leave their countries on a lark seeking more gay bars,” says Cary Alan Johnson, executive director of the International Gay and Lesbian Human Rights Commission.  He adds that in places like Uganda it is because of an overwhelming sense of fear for their lives.

Kaoma says Uganda is unique only in that it has gotten more international attention. Other African countries continue to take steps to criminalize homosexuality. This, he says, will increase the flow of LGBT refugees if the international community doesn’t put pressure on these governments.

Larry, a leading Kenyan gay rights advocate who now lives in Texas after being granted political asylum, was forced to relocate to Uganda in 2007 after he appeared on Kenyan national television as an openly gay man. “I left for Uganda because I needed to go undercover since there were multiple threats to my life.” He says he chose Uganda because of its proximity to Kenya and because he had friends there.

Neil Grungas, executive director of Organization for Refuge, Asylum and Migration, a San Francisco-based organization assisting LGBT refugees and asylum seekers, says that while there is no way of knowing exactly how many LGBT African refugees there are, it is a growing problem. “We know that it’s an enormous issue in Africa because the continent has the most concentrated persecution against gay people,” he said in a phone interview.

The U.N. High Commissioner for Refugees and the U.S. State Department do not track refugees who are displaced because of their sexual orientation. But even if those numbers existed, Duncan Breen, senior associate at Human Rights First, a D.C.- and New York City-based human rights organization, says the numbers would be grossly inaccurate given how many of these refugees might be afraid to reveal their sexuality.

But those working on refugee issues believe that the flow of LGBT refugees is on the rise. They point to the U.N. High Commissioner for Refugees issuing guidelines for working with LGBT refugees and providing sensitivity trainings to its field staff. Also this past summer, the Office of Refugee Resettlement within the Department of Health and Human Services funded the very first LGBT resource center, at Heartland Alliance for Human Needs and Human Rights, a Chicago-based organization that provides services to immigrants and refugees. Under the grant, the group is to come up with best practices for resettling LGBT refugees in the U.S.

Still, advocates and some U.S. politicians say the U.S. government should do more to expedite the resettlement process for refugees fleeing antigay persecution.  In a February 2010 letter addressed to Secretary of State Hillary Clinton, Sen. Kirsten Gillibrand (D-N.Y.) and  Rep. Tammy Baldwin (D-Wis.) urge Clinton to take decisive steps to protect LGBT refugees, who are targets of violence in the countries they have escaped from as well as the ones they’ve escaped to.

Danny Dyson, one of the first African refugees to be resettled in the United States because of the anti-gay persecution he faced in Uganda, went back and forth between Uganda and Kenya before his arrival in San Francisco. “It was a nightmare in Kenya,” he said. “At first I didn’t have any help, and I had to leave the refugee camp I went to because other refugees started harassing me for being gay.”  Dyson finally found help with a U.S. nongovernmental refugee assistance group, which asked that it not be named because they feared recriminations for their work with LGBT refugees.

Dyson and Fred met in Kenya as refugees. Fred awaits a decision from the U.S. government on his application for resettlement. Having heard about Danny’s successful resettlement in America, he asked me, “Is it true there are lots of us there and I don't have to hide?”

Naomi Abraham is a multimedia journalist in New York City. She reported from Kenya and Uganda as part of a project sponsored by the International Center for Journalists. The Ford Foundation provided funding for this story.