David Javerbaum has written for Stewart and Colbert. Now he\'s punching-up God\'s jokes. He tells us which is harder 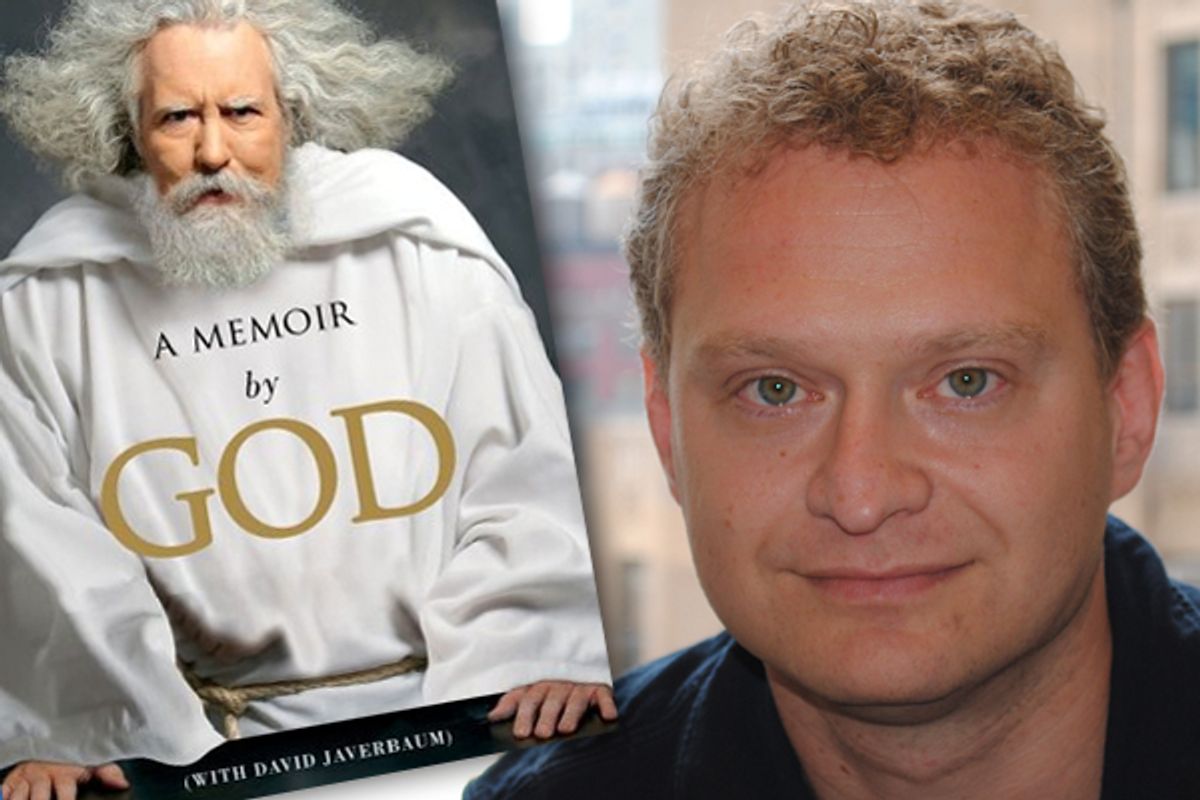 Those "Daily Show" jokes that seem so easy at 11 p.m. -- well, they aren't so easy sitting across from the show's former executive producer.

"I don't know what the sequel would be," says David Javerbaum, referring to his new book, "The Last Testament: A Memoir by God," and his voice trails off. There's a moment of opportunity to provide the punchline before Javerbaum jumps back in with the exact right one -- "Oh God: You Devil," the George Burns sequel -- and any late-night comedy writing dreams are extinguished.

"This is all I do," Javerbaum says. "My brain is a reflex. I'm less skilled at other things, like having human relationships. Using the dryer."

Javerbaum has a mere 11 Emmys and 2 Grammys to go along with his credits at "The Daily Show," and as the co-author of "America (The Book)" and "Earth (The Book)." He's a veteran of the Onion and David Letterman's "Late Show," has scripted openings for both the Tonys and the Grammys, and with Adam Schlesinger of Fountains of Wayne, adapted John Waters' "Cry-Baby" for Broadway.

His latest book is an eye-catcher -- it's a "memoir" by God with an awfully serious-looking cover. It does what "The Daily Show" does so well -- it satirizes religion by both taking it seriously and not taking it seriously at all, using humor to both point out the inconsistencies of the holiest texts and to describe God's codependent relationship with celebrities.

Over breakfast last week -- before Javerbaum hustled off to a reading of a new musical based on the life of James Watt, Ronald Reagan's controversial interior secretary -- he discussed the new book and the influence of "The Daily Show," and even sent a special joke out to the Catholic League.

A memoir of God: How is it possible that no one thought of this before?

I know! I am stunned. It's the lowest-hanging fruit. It's like a banana tree with fruit one foot off the ground, and no one has touched it. It's forbidden fruit. It's right there. As a comedy writer, you want to comment about things people know about. Everybody knows this – and no one went for it before. It's very puzzling to me.

Did you need to read all of these texts as research?

That's really funny. In New York, people ask, "So, did you have to read the Bible?" In most parts of the country, you just read the Bible. Of course you did. It's the Bible. You read it and you integrate it and you know it so well, you're free to misquote it. That's the way it's supposed to be.

I did read the Old Testament and the New Testament, which is really one book with four variations, and I read the Koran. It's not that big a deal. It's reading three books!

You hit upon such an elegant argument about evolution that it's stunning the Intelligent Design folks haven't latched onto it: The evidence for evolution is incontrovertible because God planted it there. It's a cosmic hoax on scientists.

Is that how you went about crafting this – take everything at face value, and try to sort out in your own mind what the funniest explanation would be to explain how religion works and its grip on people?

So spending all this time thinking about it: Does a New York liberal emerge with any new insights on religion as a result?

As a Jew reading about Jesus, I thought he's a pretty good guy. It's the same conclusion Monty Python drew in "Life of Brian" – if people actually live what he did, it would be a pretty good world. But Jesus and Christianity have a tenuous relationship at best.

Some of which you suggest in the book has to do with Jesus' relationship with his father.

He has a father with a hair-trigger temper and will smite at a moment's notice. He is the opposite of that. I tried to go inside that family dynamic, and thought maybe there's a couple other kids that we don't know about. The idea of Zach, Jesus and Kathy made sense to me. He was a middle child. Middle children often get neglected. Someone like that wasn't going to have a place in that family. He's not interested in smiting. He's not interested in the sweet fragrance of slaughtered oxen.

I can see Jesus peeing. It's bumping into the Pope in the Vatican bathroom that I can't imagine.

Well, the pope doesn't pee. He has little boys who hold up his wiener. That one's for William Donohue of the Catholic League. A joke for you, Billy!

Some Catholics might also take exception to what God says about Islam in this book. It does seem to be his favorite religion.

He sees Christianity as a lot like Wal-mart, Judiasm like Blockbuster video and Islam is like Starbucks – a variation on one term, people love it all over the world, they will wait on line for it, devote a lot of time to it.

Because they're the best. End of discussion. What kind of question is that? They're the Beatles.

God also has a limited appetite for Christian music.

You also suggest God's a little tired of having his name shouted out during sex. What would he prefer people scream?

Anything other than his name. You know, the main time he is summoned these days in a secular society is sex and sneezing. Those are the two things – some act involving an ejaculation or a bodily fluid, and he is summoned. I think he'd rather not be called at all then be called to deal with mucus and semen.

That's nothing. The Book of Revelation has about 30 jokes per page.

What does it take to generate that much material on one topic?

I think a lot of people would like to know those lessons?

The key is this: Whenever possible, try to find the central absurdity or irony – you know, the thing that is the root of the funny – and then build a joke off that.

What's the most important thing about a "Daily Show" joke: the politics or the laugh?

Nobody leaves "The Daily Show" to work for MoveOn.org. We go to comedy jobs. We're not political people. The jokes are commentating and they have something to say, but the fact that they're commentating does not make us activists. We're social commentators.

Well, but if "The Daily Show" is one of the few places willing to comment on something …

… right, then it's activism by default, but it's not our default. If people are tuning into "The Daily Show" for news, it's like an alcoholic drinking shampoo because there's nothing else in the house.

That's a great line, but do you think it's true? Not only are the jokes funnier if you come to the show with knowledge, but there probably is more news within that half-hour than many half-hours of cable news. Certainly it reveals more of the truth …

You say that and I say that because our vision of the truth is that. There are plenty of other people for whom the truth is Fox News and any other truth is bullshit. They are as sure of their conviction as we are of ours.

You wouldn't say the show has a political impact then? Sometimes it feels like those involved want it both ways – to have this voice, but then to say "we're just comedians" when asked about its influence.

If you're tuning into Fox, that's who you are. If you're tuning into our show, that's who you are. They're not converting anybody. You know what you're going to get. But on those times when we'd go after Obama and the Democrats, we didn't do it fake – we did it for real. It was good to get the audience going, "You can't do that." You shouldn't be aligned with anything other than your own sense of right.

What I'm trying to get at is this: "The Daily Show" has picked up a ball journalists have dropped. The show uses this crazy technique of actually showing the video of what people have said in the past, and it's probably the single most effective way of pointing out how insanely polarized Washington is along party lines. There's almost no one else doing that, and it is important. Does that role weigh heavy? Or is the joke really more important?

And yet if it was used a little more …

Yes, people would be looking to us to be funny. The success of the show and whatever place in pop culture people think it has is a function of everybody else's failure and not our success. Really, I mean it.

The new book walks that same line – it's a humor book, but there are some serious underpinnings.

It's a lasagna. One thing I left out, because the section on Lot's wife ends on a solid joke, but after his wife turns into a pillar of salt, Lot's two daughters, concerned about their father's legacy, got him drunk and fucked him. That's in the Bible. People should know that is in the Old Testament and they should reconcile their view of the Old Testament with that reality.

We tried to put an ad for the book in the New York Times that said "Like the Bible, only true." They said no to that.

That's perfect, conservatives think it is the house organ of the left, but Fox News would never turn down an ad like that, if it was the other way around.

They don't want people to think that, so they cover their ass. It's classic liberal thinking – there you have it in a nutshell. Ineffectual defensiveness is the hallmark of the liberal movement.