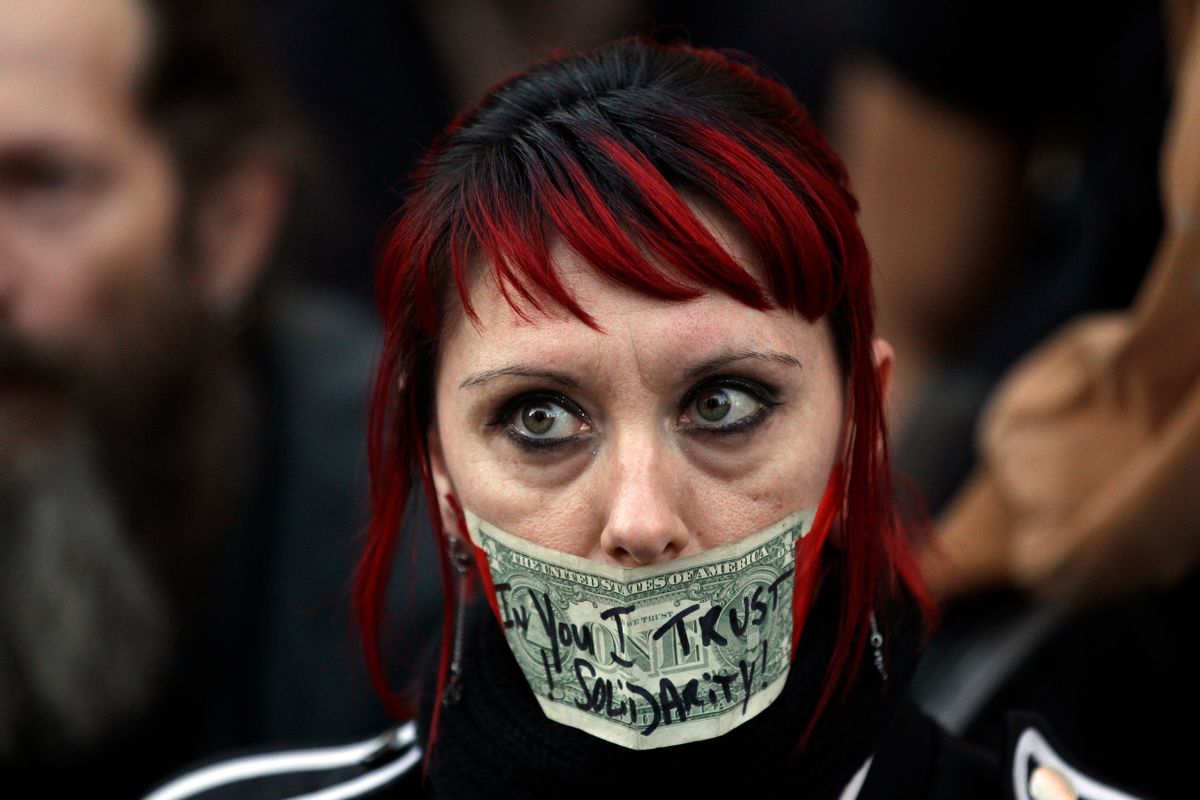 A protester tapes a dollar bill over her mouth at Occupy Oakland. (AP Photo/Marcio Jose Sanchez)
--

From New York to Nashville, from Miami to Seattle, tens of thousands of people have taken to the streets to protest America’s shocking income inequality and a broken political-financial system that is designed to ensure that the rich get richer and the rest of us get nothing. It’s the most significant progressive protest movement in years. And yet in America’s most left-wing city, pundits for the San Francisco Chronicle, the city’s daily newspaper, are coming across like the smarmy voice of the Chamber of Commerce. They’re so obsessed with the Occupy San Francisco movement’s illegal encampment, its effects on local businesses and the unruliness of some of its members that they have failed to grasp its historic significance.

You’d expect this from a paper in Salt Lake City. But San Francisco? The place famous for nurturing the Beats and the hippies, the women’s and gay rights movements? The free-spirited city-state that has always laughed at American Babbitry and fought for social justice? We deserve better than this.

On Thursday, Oct. 27, the Chronicle ran an editorial titled, “Occupy Oakland exits the high ground.” While acknowledging that “[t]he sweeps were rough and far from perfect,” it defended Oakland’s decision to remove the tent city, saying it had become a “health hazard and a public nuisance.” “Health inspectors are equally concerned about San Francisco’s campground at the foot of Market Street.” The editorial warned that public support for the movement would likely wane if it didn’t comport itself in a more respectable way. “It's doubtful the country wants permanent tent villages on its public doorstep,” the editorial concluded. “It's more than just manners and hygiene that are discrediting this movement. The protesters' messages, mixed and muddled from the start, are getting eclipsed by the unruliness that is afflicting people and businesses on Main Street.”

Chronicle columnist C.W. Nevius has been striking a similar note. To be fair, Nevius has not been strictly opposed to the Occupy San Francisco movement: He has sympathetically interviewed protesters and defended their First Amendment rights. But like the author(s) of the Chronicle’s Op-Ed, he has seen the movement through a prism of seemliness. On Tuesday, Oct. 25, Nevius wrote a column titled “Time for police to move in on Occupy SF protesters.” Nevius argued that the San Francisco police should never have allowed any tents to go up in the first place, but that it was now necessary to remove them. “Many of the city's homeless residents have gravitated there, the sanitation is a nightmare, there are rats, and car batteries are neither a safe nor ecological energy source,” he wrote. He urged Mayor Ed Lee to prove his leadership qualities and remove the camp. “There is no other choice. As Occupy SF gets bigger and louder, the potential for trouble only increases. Lee is getting persistent questions about why there are tents all over the Embarcadero, and with the election looming, you can bet he'd like to show he can handle this.”

As the last sentence shows, Nevius’ column was written in an oddly ambiguous manner. On the one hand, he was clearly advocating that the camp be removed. On the other, he was simply acting as if were a neutral channel, a kind of Greek chorus for nameless power-broker types who were raising “persistent questions” about the unsightly tent village. The contradictions in this split perspective came into full view just three days after his column.

The very night Nevius’ column appeared, the debacle in Oakland took place, when decorated Iraq war veteran Scott Olsen had his skull fractured by a projectile fired by the police as they cleared the Occupy Oakland camp. The international press, not to mention mom-and-apple pie papers like USA Today, were all over the Olsen story.

In his Friday column, Nevius abruptly changed his position. Apparently, the “sanitation nightmare” and increasing “potential for trouble” that had existed three days earlier were no longer such pressing concerns. “There is no rush,” Nevius wrote. “[San Francisco Police Chief Greg] Suhr and [Mayor] Lee are still talking vaguely about clearing the area, perhaps by force. I'd say cool your jets and wait and see what happens. The great truth of law enforcement is that there is always time to overreact.” To his credit – although it also revealed the incoherence of his position -- Nevius gave space to sources who completely contradicted the points he had made three days earlier. Apparently summarizing the position of political consultant Chris Lehane – although the context also left open the possibility that he was speaking for himself -- Nevius wrote, “The city's claim that the Occupy SF camp was rife with urine, vomit and feces was exaggerated. It looked like a way to justify a raid.”

Memo to Greek-chorus-channeling, “neutral reporter” Nevius: tell that to your alter ego, the guy who insists that the city has to tear down those unsightly tents now.

The bottom line is that the prissy preachiness of the Chronicle’s punditry, in the guise of “civic concern,” has led them to end up taking the Chamber of Commerce’s side on a crucial issue that goes to the heart of San Francisco’s identity. This is a far cry from the open-minded tradition of former Chronicle executive editor Scott Newhall, who ran the paper in its ‘60s glory days and made sure it welcomed the unsightly and unruly hippies, and the legendary columnist Herb Caen, who despite hobnobbing with the rich and powerful always sided with the little guy, with the bohemians and oddballs his beloved town was famous for.

Yes, the Occupy San Francisco tent village is illegal. Yes, it is unruly. Yes, there are homeless people there. The movement is filled with oddballs and dropouts and nuts, and based on my own visits there, they outnumber the “respectable” types, the unemployed workers and students and housewives. And if real problems arise, violence or vandalism or disease, the city has the right and obligation to take steps to remedy them. But since no such problems have arisen, it’s impossible to escape the conclusion that the hand-wringing about the tents is all about image. The Occupy San Francisco movement is flawed and unsightly, like panhandlers and street people. The tourist-friendly solution: clean it up.

That isn’t liberal swill. It comes from a book called the Bible.

There is an inevitable tension in this nascent movement between the homeless and the middle-class, between the hardcore types who welcome confrontation and the moderate types who don’t. But the tents at the foot of Market Street are literally big enough for all of them. And San Francisco, of all cities, should welcome those tents. They may be ugly, but there is something beautiful about them. Saint Francis, for whom this city is named and who began his saintly career when he gave his clothes to a poor man, would have understood that.