Proof that anger at the financial sector is broad-based: Plans to charge fees for debit-card use are crumbling 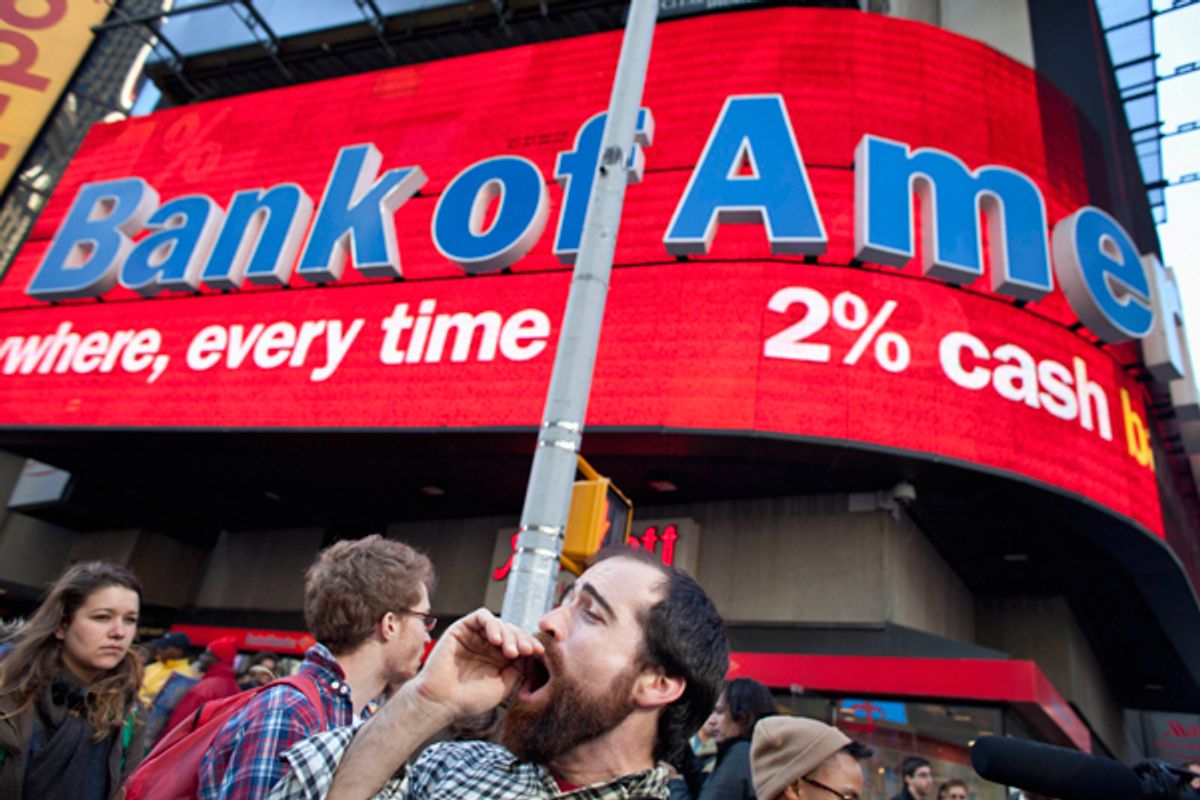 On Monday morning, the second most popular story on the Wall Street Journal was a four-day-old article with the headline "Banks Blink on New Card Fees." The gist: Alarmed at the public outcry against Bank of America's proposed five-dollar-a-month fee to use debit cards, other big banks were rolling back their own plans to introduce similar fees.

The day after the Wall Street Journal story was published, Bank of America announced that it intended to scale back its plans, and Wells Fargo revealed it was canceling a test  of a $3 dollar debit card fee in selected markets.

The spin has been fun to watch. Exhibit A:  Politico's "Left Blogs Crow Over Bank Fee Win."

Progressive bloggers are celebrating and crediting Occupy Wall Street for the news that Bank of America is reconsidering its roll-out of a $5 debit card fee, characterizing it as a "hidden victory" for the still-burgeoning movement... The fee had been greeted with outrage on the left, the liberal blogosphere, and the President of the United States, who publicly rebuked the bank's decision.

Let's withhold judgment, for the moment, on whether there is a direct connection between the Occupy Wall Street movement and the turnabout on bank fees. The first thing to note about Politico's reporting is what is missing from the last sentence of the selection quoted above.

"The fee had been greeted with outrage on the left, the liberal blogosphere, and the President of the United States, who publicly rebuked the bank's decision... and the vast majority of debit-card users in the United States."

American anger at greedy banks is not a partisan issue. Most Americans have a visceral understanding that the big banks played a key role in precipitating the financial crisis, but got bailed out and returned to profitability while the rest of the country continued to struggle. The fact that readers of the Wall Street Journal, whom you might reasonably expect to skew conservative, are still clicking on the bank fee story, four days after its original publication, is a clear sign of the broad base of resentment against the financial sector. The same banks who won't renegotiate our mortgages want to charge us more to use our own money?!

Yes, it's true that banks stand to lose billions in revenue from restrictions on overdraft penalties and interchange fees as a result of regulatory changes. But most Americans seem to believe that the banking sector makes too much money -- that it "occupies" far too large a percentage of the American economy.

Progressive bloggers are correct to celebrate Occupy Wall Street, and have every right to "crow" about the bank change-of-heart -- but not because the welcome news represents a victory for the "left". The real victory is for the average bank customer. The fact that outlets like Politico are having such a hard time grappling with is that Occupy Wall Street represents the mainstream American opinion on the banks. All the proof we need of that is the sight of the banks running away from their plans to introduce new debit card fees. Because ultimately, the only reason the banks would change their minds on something like this was if they feared that they would lose money as a result. As FireDogLake's David Dayen wrote on Sunday, "Bank of America single-handedly revived the Move Your Money movement." The best possible way banks could encourage mass participation in November 5th's Bank Transfer Day would be to keep pissing off their own customers.

They might be greedy and venal, but they're not quite that stupid.