Despite DC consensus on the importance of "tackling the deficit," no one wants to touch the guns and bombs budget 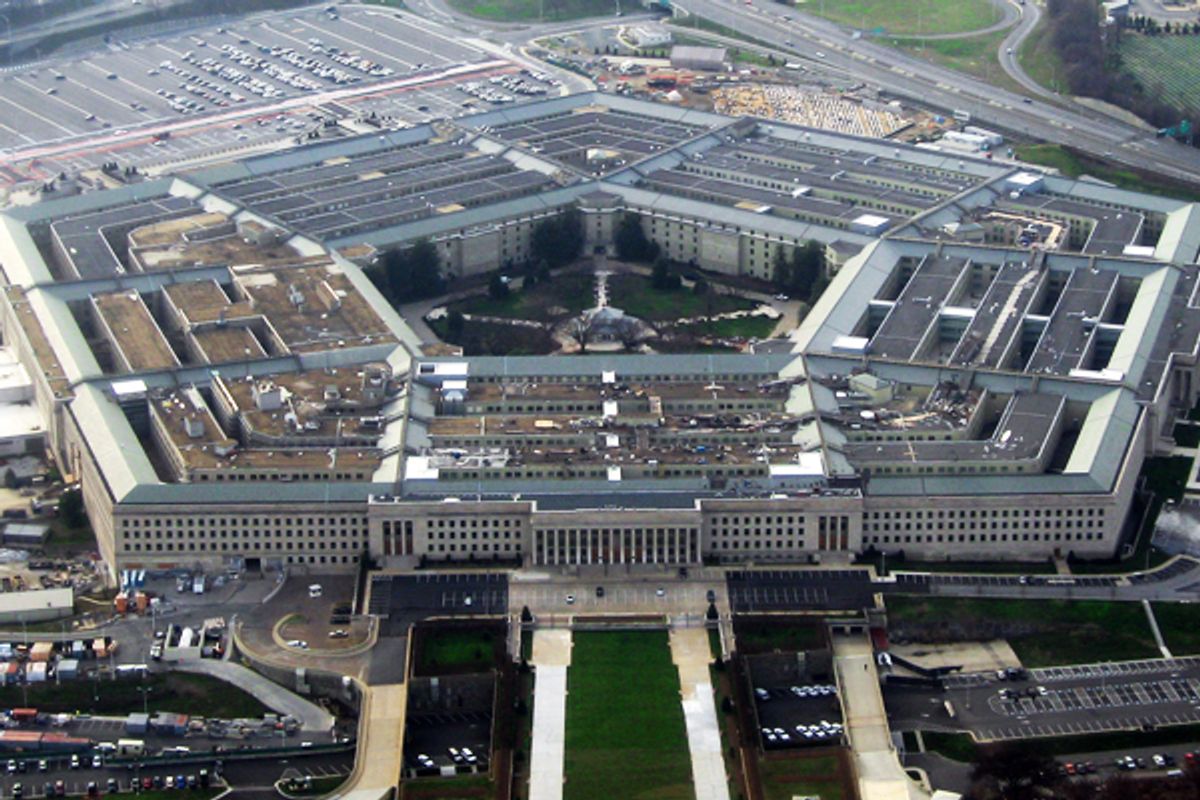 Here's a short list of things that most of the Washington establishment agrees on: The federal budget deficit is the single most pressing issue facing the nation today and also our military must always be powerful enough to face any conceivable present or future threat. When those principles come into opposition, regular people usually lose, because they are not cool stealth fighter planes.

Wired's Spencer Ackerman reports from the Army's "Unified Quest" event, in which the Army "holds a series of wargames and symposia to help it think about its needs for the near future." Its needs generally include funding that matches or exceeds current levels.

We are, of course, currently drawing down from one of the multiple wars we're fighting, making it harder to justify maintaining such a large Army, but the Army is basically convinced that the world is heading for a disastrous post-apocalyptic hellscape scenario:

The gist is that the global economy is going to get worse before it gets better. Playing armchair economist — gleaned from airport economic tomes like Aftershock, a book about how to “Profit in the Next Global Financial Meltdown” — Army panelists predicted that recovery won’t take root until 2020. That will lead the U.S. to pull back from its global security burdens, leading resource-starved nations to “go take the oil” in the resulting leadership vacuum, opined Robert Toguchi from the Army Capabilities Integration Center, which sponsored the futurism seminar.

Meanwhile, ecological disasters and a weak economy will change world migratory patterns to favor “mega-cities” of more than 10 million people. Guess what that means. “The battle terrain [will become] increasingly urban and complex,” Toguchi continued. “We had the experience of Fallujah and Sadr City, but it’s going to be a lot harder.”

The global economy will remain a horrific disaster for another decade and we're facing worldwide environmental catastrophe, so we must never, ever cut funding for the Army. Got it.

The Army shouldn't even worry itself with justifying its funding. As with anything involving dollar amounts in the billions, there's a side industry devoted to maintaining these government income streams for the corporations that profit from our addiction to defense spending. The aerospace and defense lobbies spend a fortune arguing that America must always spend 10 times whatever any other nation spends on future weapons and missile defense systems that don't work and things like that.

These industries have powerful allies, too. (I mean besides almost every single member of Congress.) Here's the Washington Post's Robert Samuelson, the conservative business columnist who regularly inveighs against wasteful government spending:

People who see military cuts as an easy way to reduce budget deficits forget that this has already occurred. From the late 1980s to 2010, the number of America’s armed forces dropped from 2.1 million men and women to about 1.4 million. The downsizing — the “peace dividend” from the end of the Cold War — was not undone by the wars in Iraq and Afghanistan. In 1990, the Army had 172 combat battalions, the Navy 546 ships and the Air Force 4,355 fighters; today, those numbers are 100 battalions, 288 ships and 1,990 fighters.

This is a distortion so naked and unconvincing that I'm surprised an editor didn't cut it to save Samuelson some embarrassment. He's comparing numbers for everything besides ... the money we actually spend on defense, which is ostensbily the topic of the column. (And when inflation-adjusted defense spending actually held steady, instead of rising, during the 1990s ... the deficit improved. So it seems like maybe it is an easy way to reduce budget deficits?)

Here's Samuelson two weeks ago, demanding that Presidents Bush and Clinton tour the nation apologizing for "not tackling Social Security and Medicare when they had the chance." (Social Security, by the way, is running a surplus and will continue to run a surplus minus any intervention for years.) But this is to be expected: Samuelson cares about maintaining a low-tax/huge-military state, not about something abstract like "the deficit." He demands that the U.S. spend less on healthcare for seniors and poor people so that we can continue to afford preparedness for hypothetical air wars with China.

There's no cut, no matter how sensible-sounding, that the defense-worshippers will agree to. The Weekly Standard says America must maintain its Cold War-era nuclear weapons system "triad" of intercontinental ballistic missiles, ballistic missile submarines, and heavy bombers, because ... well, some unnamed future enemy might figure out how to shoot down cruise missiles and track submarines, and then we wouldn't be able to nuke them to death after they nuke us.

But in Congress, as Matt Yglesias recently noted, the primary argument against defense cuts is, of course, jobs. Because the American people would like jobs!

It's true that defense spending leads to side benefits for consumers and other industries, but direct investment in research in those other sectors would be just as helpful. Defense spending "creates" jobs, too. As Paul Krugman says, that's because government spending creates jobs, making every Republican who uses that argument a secret Keynesian.

All I'm saying is, it'd be nice for most of us to see some of the billions we spend blowing other people up spent maybe on educating, feeding and employing people, instead. But a lot of people have a very strong financial and ideological commitment to argue otherwise, and they usually win.