The twisted history of candy

From the tragedies of the slave trade to the glitz of the Jazz Age, the story of these sugary treats echoes our own 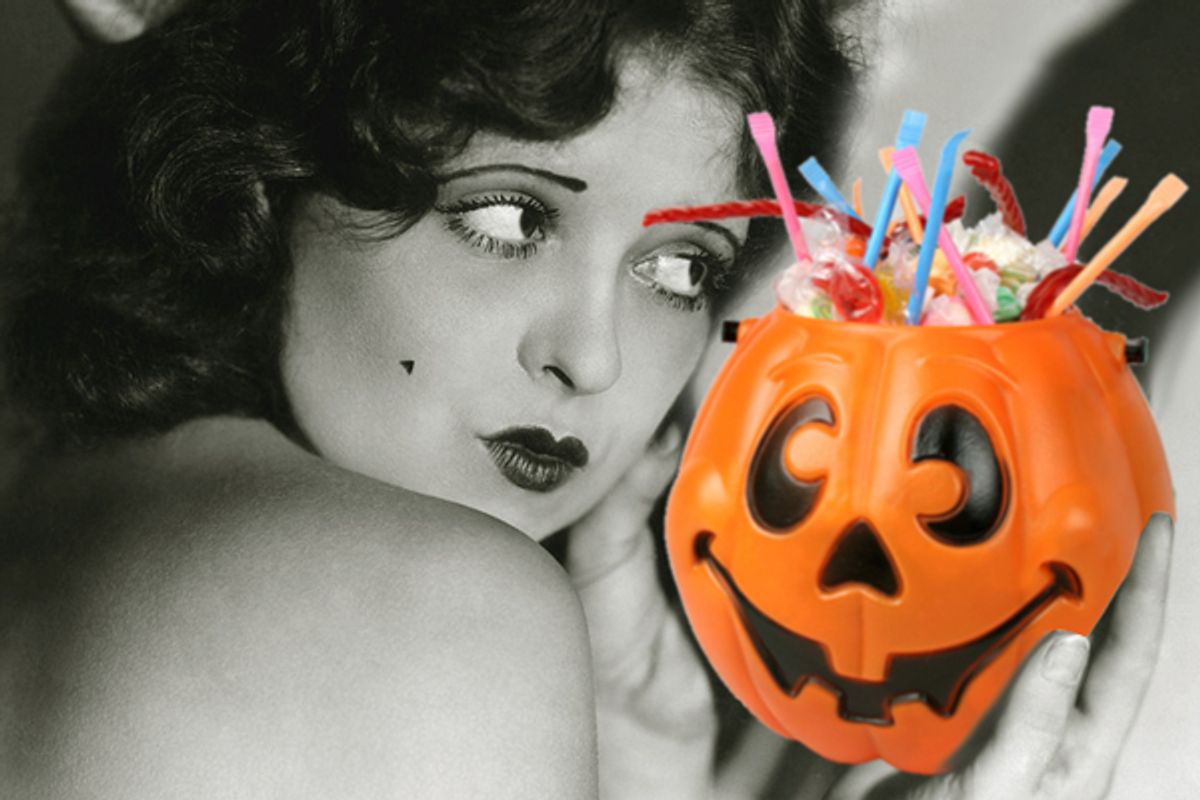 As frost bites the air and plastic Halloween bunting unfurls in suburban yards, our thoughts turn to the simple delights of candy: the pastel snap of Necco wafers, the dubious rattle of a box of Good & Plenty. Half the candies we ate as kids weren’t actually good. Even at the time we suspected as much. But candy offered an undeniable pleasure: It was fantastic, it was unreasonable, it came in colors and shapes unrelated to actual food. And on Halloween, it was free.

Although tricks and treats have been part of Halloween tradition for ages, October 31st didn’t become a candy-centric holiday until the 1950s, when aggressive marketing campaigns began to tell Americans a different story about All Hallows’ Eve. And naturally, the story was about candy. Perhaps this is appropriate. Our larger story as a people is, in a sense, a story of candy.

Leafing through the wrappers of forgotten candy bars, you see a gaudy reflection of our past. Ghostly faces stare back: The silent film star Clara Bow graced the “It” bar, the Gypsy bar honored burlesque dancer Gypsy Rose Lee. Eager to capitalize on the glitz of the Jazz Age, candy manufacturers churned out the Charleston Chew, the Black Bottom, Red Hot Liza, Big Dick, Jazz Hound and the Sloppy Sally. We asked candy expert Dr. Samira Kawash for her take on these names. "In the years between the world wars, there were real tensions and conflicts about the changes in sexual norms and the changes in propriety and manners ... There were so many candy bars coming out [in the 1920s] that the candy makers really were striving in the most innovative and creative ways to catch attention -- like naming candy bars after lewd dances and strippers. Just like today, sex sells."

But it wasn’t all strippers and jazz hounds. Candy advertising has always played on the double gamut of human desire: Marketers have sold candy as a sinful indulgence while simultaneously touting it as a bona fide food, a healthy snack and even a diet aid. Candy bars like the Chicken Dinner and the Denver Sandwich were the 1920s precursors to our modern “breakfast bars”: by evoking an association with food, advertisers grant us guiltless pleasures.

In World War II, American soldiers carried D ration, one of the few packaged snacks in history that tasted vile by design not accident. Captain Paul Logan of the U.S. Quartermaster’s office explained his requirements to Hershey representatives: “a bar weighing about four ounces, able to withstand high temperatures, high in food energy value, and tasting just a little better than a boiled potato.” It sounds sadistic, but Logan had the G.I.’s survival in mind: He assumed that if the chocolate tasted too good, it wouldn’t still be around when the actual emergency hit.

Ad agencies were quick to capitalize on military-mandated candy rations. A 1941 advertisement for Dextrose corn syrup claims: “Today people realize that candy is more than a confection. It is a veritable bulwark against between-meal fatigue. Even doctors consider candy a desirable requirement of the daily diet. It is a specified item of military rations.”

Although the Draper-esque characters who penned these ads may have been stretching the American imagination, human evolution was working in their favor. As evolutionary biologist Jason Cryan points out, “The evolutionary explanation for the sweet tooth revolved around that idea that we have physiologically associated a sweet taste with high-energy foods which would have helped our earliest ancestors survive better in their environment ... if an individual has to spend time and effort foraging for food, it’s better to obtain energy-dense food items than energy-poor food items.”

And by 1941, candy had been selling as medicine and dietary supplement for over a thousand years. Ancient Indians developed special confections to feed to new mothers and invalids. In the seventh century, Persian monks learned to refine raw sugar by boiling it with lime water and bullock’s blood; they used the resulting sugar loaves as a base for developing new medicines. When the Arabs invaded Persia, they developed a taste for candy and sweet Persian remedies; to that end, they turned Sicily and Spain into sugar production centers. Enthusiasm for candy-based medicine spread across the continent — in the Middle Ages, wealthy Europeans ate confections of spices and sugar to aid digestion. In Britain, candy was touted as a cure for the common cold: Sugar was sold in twisted sticks, flavored with oil of wintergreen.

Then, as now, the sales pitch went both ways: Candy was hawked as either a health supplement or an indulgence. But whether lozenge or lollipop, up until the 19th century candy conveyed status: Sugar was expensive. Arab texts from the 13th and 14th centuries describe sugary treats as a focal point at the most elegant banquets. European kings and queens employed court confectioners to spin fantastic sugar sculptures.

Queen Isabella of Castile, as it happens, was particularly fond of sweets. The queen’s apothecary mixed her sweet cordials and kept her tables stocked with sweetmeats. When Isabella sought the perfect Christmas present for her daughters, she settled on a truly sumptuous item: a little box brimming with sugar. Perhaps it’s fitting that Isabella’s minion Christopher Columbus would lay the groundwork for the American sugar dynasties: On his second voyage of discovery, Columbus transported sugarcane cuttings from the Canary Islands to the Caribbean Island of Hispaniola. And so began one of the darkest chapters of our history.

In “Rum: A Social and Sociable History,” Ian Williams notes that sugarcane needs plenty of sunshine and water to grow. He adds that “the intensive labor needed to cut, cart, and process the cane under a broiling tropical sun has never appealed to people with other career options.” African slavery was a direct result of the world’s lust for sweets and rum. This desire created brutal places, redolent with burning sugar and blood. These small plantation fiefdoms were isolated, and enslaved Africans dramatically outnumbered planters, who relied heavily on fear as a method of control. The typical workday stretched from sweltering dawn till sweaty dusk; the typical workplace was a scorching sugar mill or a snake-infested cane field. After surviving the deadly voyage to a Caribbean sugar kingdom, an enslaved African could expect to live about seven years.

Abolitionists began calling for a sugar boycott. In 1788, the British abolitionist William Cowper condemned the sugar trade in his poem, “The Negro’s Complaint”:

Why did all-creating Nature
Make the plant for which we toil?
Sighs must fan it, Tears must water,
Sweat of ours must dress the soil.
Think ye Masters, iron-hearted,
Lolling at your jovial Boards,
Think how many Backs have smarted
For the Sweets your Cane affords!

Fifty years later, such doggerel would help spark the American Civil War, which, ironically, led to a decrease in sugar prices and a subsequent increase in candy consumption. The demand for candy triggered an explosion of new varieties: Hershey’s kisses, Goo Goo Clusters, Mary Janes, King Tut, Subway Sadie, Snow Cup, the Snirkle, the Squirrel Nut Zipper, and the unfortunately named Daddy Sucker (later changed to the Sugar Daddy). According to the late candy historian Ray Broekel, around 30,000 varieties of candy bar were introduced to American in the first three decades of the 20th century.

Although it’s difficult to imagine a workplace more terrifying than the sugar plantations of the slave era, early American candy factories were no cakewalk. The candy giants (Nestle, Lindt and Hershey) pioneered innovations in candy processing that spawned an industry characterized by low wages and questionable sanitation.

In the first decades of industrial production, candy workers were generally young women, immigrants or the children of immigrants. In 1913, a teenage candy worker confided to a Chicago journalist: “Do you know … I laugh whenever I see a sign in a street car telling a man to show his girl how much he loves her by buying a box of somebody’s candy. It is like killing beautiful birds so women can wear aigrettes in their hats. If they only knew about candy making in factories, they would make their own candy at home or do without it.”

Even candy manufacturers conceded that the industry had its unsavory side. “The less the public knows about candy making, the better,” the manager of a large candy factory told a representative of the Consumers’ League of New York. The results of the league’s 1928 survey of candy factories backed this assertion: Temperature in factories hovered around 45 degrees, and 14-hour days were common. The investigator was appalled by the sanitary conditions in some factories: “Floors and stairs were coated with sugar and fallen candy; machinery and worktables were apparently never scrubbed; the odor of rancid chocolate permeated the atmosphere.” Of the industries that employed women, candy offered the lowest wages. And things were going downhill for the worker: Even in 1928, larger corporations were squeezing or buying out smaller competitors. The report concluded: “Working conditions have deteriorated with corporation control and quantity production. In one factory, a decrease in the beginning wage, from $14 to $12 (a week) took place.”

When we asked Steve Almond, author of the excellent “Candy-freak: A Journey through the Chocolate Underbelly of America,” about conditions today, he put it this way: “In the popular imagination, it's all Willy Wonka, pure imagination and childish enchantment. But up close, it's pure Darwinian capitalism.” That said, “Candy-freak” emphasizes both the dark and the light side of candy: a product that spawns both tooth decay and pure delight, an industry ruled by corporate behemoths, yet home to the rare small factory that offers workers a sense of pride and family. During his research, Almond toured the few old school American candy factories that haven’t been swallowed by the big three (Hershey, Mars and Nestle). He describes Russ Sifers of Valomilk and Dave Wagers of Idaho Candy Company (makers of the Idaho Spud as regional producers who struggle valiantly to keep afloat in a world where supermarket chains demand $25,000 slotting fees to even stock a product. These last scions of the old school are notable for their dedication to original recipes and packaging, for their genuine love of candy, and for their sense of responsibility to the nostalgic candy-freaks of the world. As Sifers himself notes: “We make Valomilks, not money.” Which reminds us: despite sugar’s sordid history, there’s a certain beauty to candy for candy’s sake alone.