Should Greece reject the bailout?

The referendum lets citizens decide their country\'s fate. If only we\'d been able to vote on bailing out Wall Street 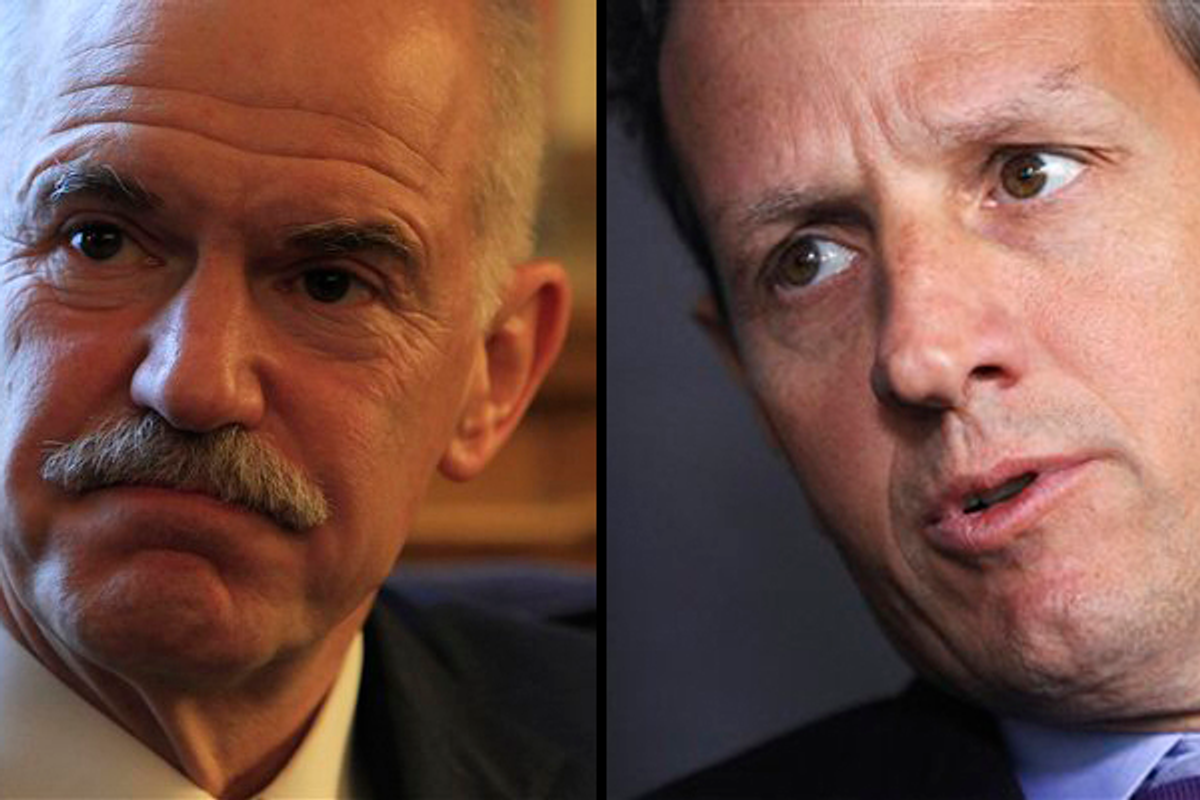 Which do you trust more: democracy or financial markets?

Greek Prime Minister George Papandreou decided in favor of democracy Monday when he announced a national referendum on the draconian budget cuts Europe and the IMF are demanding from Greece in return for bailing it out.

(Or, more accurately, the cuts Europe and the IMF are demanding for bailing out big European banks that have lent Greece lots of money and stand to lose big if Greece defaults on those loans – not to mention Wall Street banks that will also suffer because of their intertwined financial connections with European banks.)

If Greeks accept the bailout terms, unemployment will rise even further in Greece, public services will be cut more than they have already, the Greek economy will contract, and the standard of living of most Greeks will deteriorate further.

If Greeks reject the terms and the nation defaults, it will face far higher borrowing costs in the future. This may reduce the standard of living of most Greeks, too. But it doesn’t have to. Without the austerity measures the rest of Europe and the IMF are demanding, the Greek economy has a better chance of growing and more Greeks are likely to find jobs.

Shouldn’t Greeks be able to make this decision for themselves?

Of course, if Greek defaults on its loans, global investors (fearing that a default in Greece sets a dangerous precedent) may yank their money out of Italy. This would almost certainly bust several big European banks – and generate panic on Wall Street. That’s why Tim Geithner has been pressing Europe to bail out Greece.

We’ve been here before, remember? Here in the United States, at the end of 2008 and start of 2009. Wall Street had made lots of bad loans, and the question we faced then was whether to bail out the Street.

The difference is, we didn’t hold a referendum. Instead, the Bush administration told Congress the nation risked “economic Armageddon” if it didn’t immediately authorize a giant bailout of the Street – with no strings attached. Of course Congress hastily agreed. Hank Paulson, Ben Bernanke and Tim Geithner (as head of the New York Fed) then doled out the money. And the Obama administration (with Geithner installed as Treasury Secretary) gave out more.

So instead of allowing the Street to live with the consequences of its negligence, we bailed it out – and allowed the Main Streets of America to suffer the consequences.

If Americans had been consulted about the bank bailout, I doubt it would have happened the way it did. At the very least, strict conditions would have been placed on the banks in return for the money. The banks would have had to eat the losses of the predatory mortgages they sold, and help homeowners reduce those mortgages. They’d be required to improve the capitalization of small banks in communities across the country. They’d be forced to accept stringent new regulations, including resurrection of Glass-Steagall.

But Americans weren’t really consulted. It was an inside job.

As a result, Wall Street has prospered but the rest of the nation hasn’t. One out of four homeowners is underwater, owing more on their homes than the homes are worth.

And with the worst economy since the Great Depression, we’re now embarking on fiscal austerity. Either Congress’s super-committee comes up with $1.2 trillion of federal budget cuts that Congress agrees to – going into effect a little over thirteen months from now – or $1.5 trillion of cuts are made across the board. Meanwhile, states and cities have been slashing public services for the past three years.

So which is it? Rule by democracy or by financial markets? Based on what’s happened in America, I’d choose the former.