Former Democrats like Rick Perry dominate the GOP. The breakdown of the New Deal coalition explains why 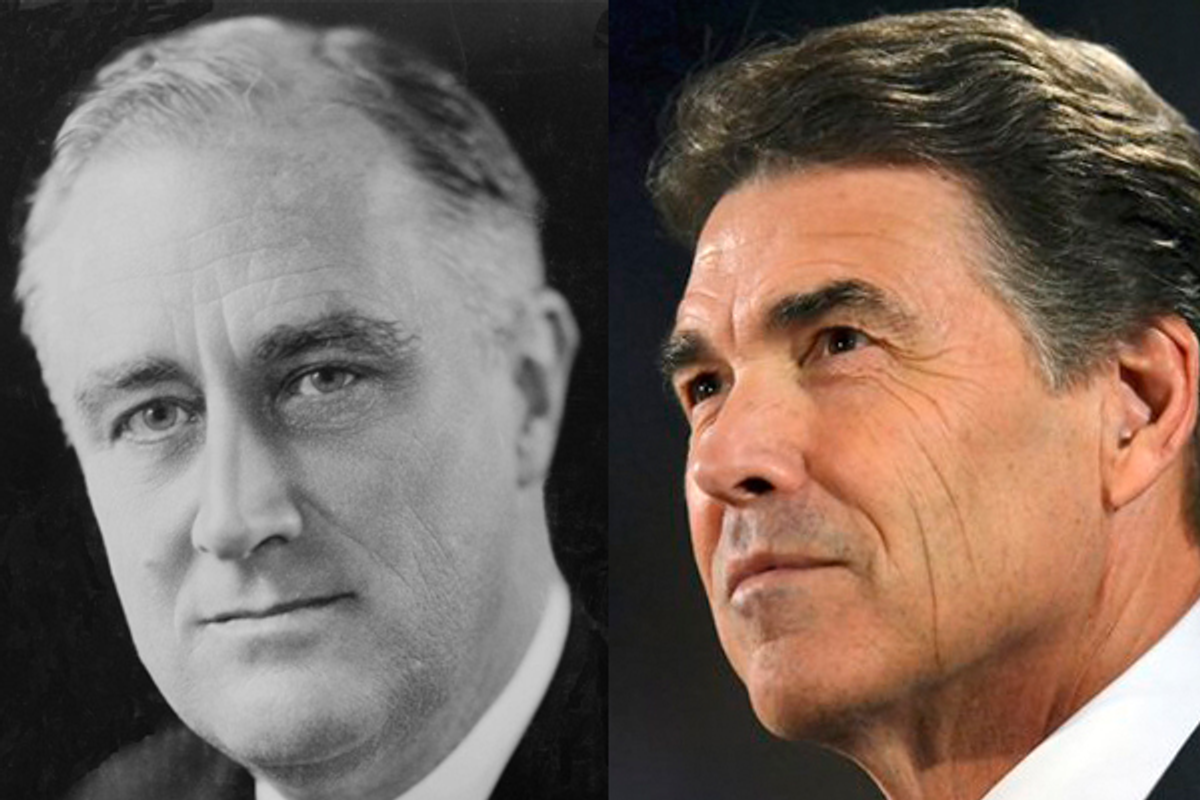 Call him Frankenstein Delano Roosevelt. America’s only four-term president is the real, if inadvertent, founder of today’s Republican Party, not Abraham Lincoln, the first Republican president. Most of what seems puzzling about today’s GOP makes sense, once you realize that it is dominated by former Democrats like Rick Perry.

The regional base of the Republican Party is the South and the West—the historic base of Thomas Jefferson’s Republican Party, the Democratic-Republicans that succeeded it and the Democrats of the 1840s through the 1960s. As a result of the civil rights and counterculture revolutions of the 1960s, several of the historic constituencies of the Jefferson-to-Johnson Democrats—chiefly white Southerners and Westerners, and European-American “white ethnics” in the North and Midwest—abandoned the Democratic Party, which is now dominated by groups that in earlier generations were predominantly Republican—Northern white Protestants and blacks, along with Latinos, whose numbers have become significant in national politics only recently.

Today’s Republican Party can be viewed as Franklin Roosevelt’s New Deal coalition, minus blacks, white progressives and the remnants of organized labor. The New Deal was supported by a heterogeneous coalition that included Southern and Western business interests, the Northern white urban working class and many Wall Street financiers. These groups did not necessarily like each other, but they formed a common front against the protectionist, isolationist Republican Party of Herbert Hoover, which represented the mostly white Anglo-Saxon Protestant (WASP) capitalist elite of the Northeastern-Midwestern industrial core.

The Southern and Western business boosters wanted federal financing for infrastructure and economic development projects in their region. The largely Catholic Northern white working class wanted higher wages. The anti-Republican Wall Streeters objected to Hoover-era protectionism and wanted to liberalize trade, so that foreign countries and businesses could repay their debts to Wall Street by exporting to the U.S. market. From the 18th century to the 21st, New York City like other financial entrepots has always favored free trade.

During their period of political domination from the 1930s to the 1980s, the New Deal Democrats gave these constituencies what they wanted. The South and the West were developed by federal infrastructure projects like dams and interstate highways. During World War II, the federal government, dominated by Southern Democrats, built military factories in the South, Texas and West Coast, creating a rival to the older “Rust Belt” in the new “Gun Belt.”

The New Deal Democrats were good to the white ethnics, too. In the northern industrial states they supported unions, allowing unionized workers to join the middle class and buy houses in the postwar suburbs.

And following World War II, the New Dealers liberalized American trade, a goal sought not only by Wall Street but also by internationally competitive U.S. corporations that sought markets in Europe and Asia. (For reasons of Cold War strategy, the U.S. later sacrificed the interests of its manufacturers by turning a blind eye to unfair trade practices in Japan and other American allies—but that is another story). Once you understand this history, otherwise puzzling aspects of the Republican right become clear.

The determination of the Republican Party to maintain high levels of defense spending whether threats justify those levels or not makes sense, once you realize that military spending is the major engine of economic growth in much of the South and the West, thanks to FDR and his successors.

Federally funded defense plants and military bases coexist in the South and West with low-wage extractive industries—farming, ranching and mining. Southerners and Westerners in the commodity sector have always been opposed to high minimum wages and unions. The low-wage, labor-intensive sectors in the South and West explain the GOP preference for low wages, while the Gun Belt explains Republican enthusiasm for defense spending.

What about the white ethnics in the North? Their parents and grandparents depended on government and unions to help them out of poverty during and after the Depression. But thanks to the New Deal, many of them are now middle class. Government and unions help other people—mostly other brown and black people—while threatening to raise their taxes or their costs. Thus the "screw 'em" attitude.

And Wall Street? Roosevelt may have denounced “the money changers” and the Democrats in the 1930s may have regulated the financial industry, but there were always Wall Street speculators who supported the New Deal Democrats, many of them Jews like Bernard Baruch or Irish-Americans like Joseph Kennedy. Wall Street opposed protection for American manufacturing in 1932 and it will oppose it in 2012. The Democrats have become more economically nationalist since the 1970s. But Wall Street has been consistent.

Not only the constituencies but also the policies of today’s GOP echo those of New Deal Democrats. Consider the cases of neoconservatism and supply-side economics.

The intellectuals who became known in the 1970s as “neoconservatives” began as Kennedy-Johnson Democrats and Cold War liberals. As Republican “paleoconservatives” point out, their vision of using the U.S. military to promote democracy throughout the world owes nothing to older Republican leaders like Robert A. Taft and Herbert Hoover and everything to the crusading rhetoric of Woodrow Wilson and John F. Kennedy.

Even the hysterical denunciation of the New Deal as socialism or fascism is a legacy of mid-century conservative Democrats in the South and West, who saw no contradiction between supporting New Deal policies of infrastructure spending, farm price supports and defense spending, while bitterly denouncing the minimum wage, Social Security, and other reforms that would give the captive white, black and brown working classes in their regions greater bargaining power.

The fact that today’s Republican Party is mainly a coalition of former right-wing Democrats explains its curious relationship to the past. Based in the former Confederacy, its leaders understandably do not play up Abraham Lincoln or the long line of Yankee Republican presidents who succeeded him. At the same time, the anti-New Deal rhetoric that today’s Republicans inherited from their conservative Democratic precursors prevents them from acknowledging the paternity of Franklin D. Roosevelt.

Unable to claim either the Republican past or the Democratic past as their heritage, today’s ex-Democratic Republican constituencies have settled on pretending that their party sprang into existence out of nowhere in 1980 with the election of Ronald Reagan. Who, it should be noted, told Dan Rather that Franklin Roosevelt was his favorite president, and who voted for FDR four times.