It's time to break up with the Kardashians 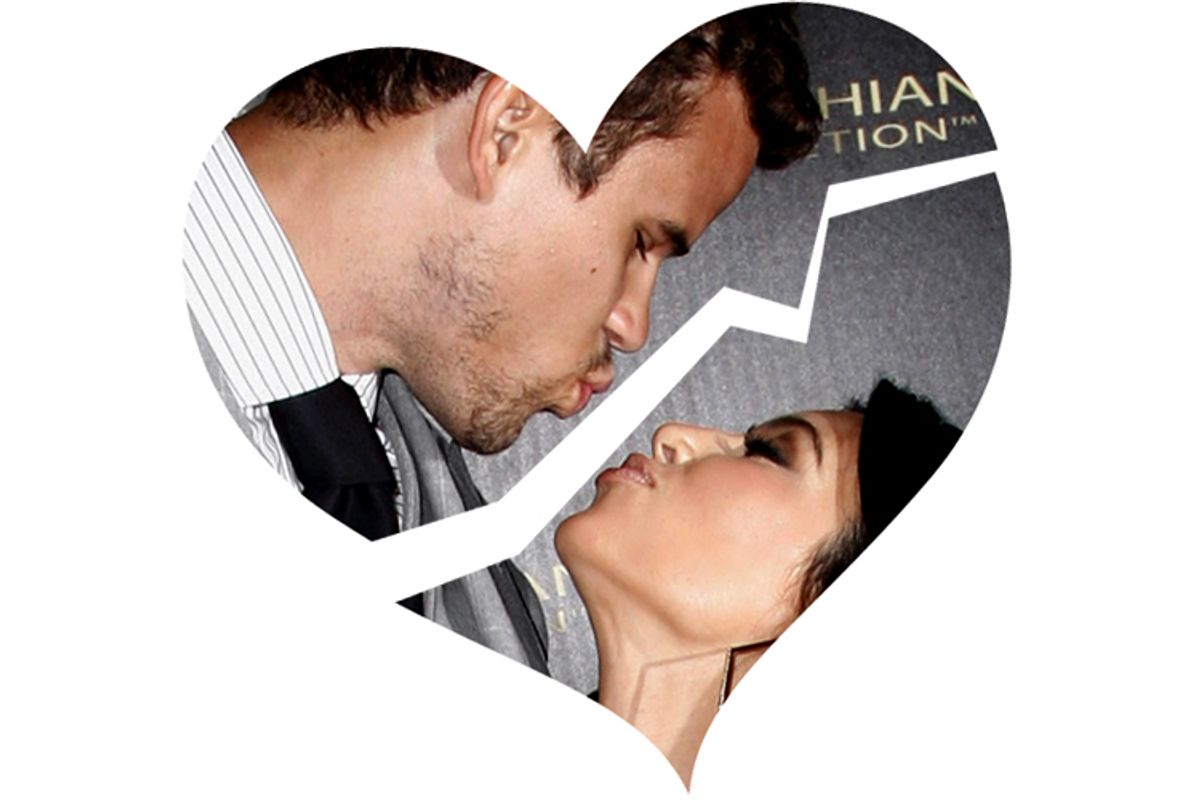 Does she have to return the $1,650 coffee pot and Lalique monkeys? More significantly, can America please stop giving a crap about her now? After giving NBA player Kris Humphries the best 72 days of her life, Kim Kardashian filed Monday for divorce. If you want to keep up with the Kardashians, you might want to start by installing a revolving door at the wedding chapel.

From the start, the whirlwind romance of the reality star and the basketball beefcake seemed to be moving at a reality television-assisted pace. The two met just a year ago, but by May, Kim was flashing a $2 million diamond roughly the size of the meteor that killed off the dinosaurs. What followed was a painstakingly chronicled and dizzyingly brief engagement. Remember July? They seemed so happy then! Remember when she said she was going to be Kim Humphries henceforth? Remember the August wedding so opulent, it made Kate Middleton's look like a lunchtime exchange of vows at City Hall? E! aired the now bitterly ironic "Kim's Fairytale Wedding: A Kardashian Event" just three weeks ago.

Citing irreconcilable differences, Kardashian said Monday, "I hope everyone understands this was not an easy decision. I had hoped this marriage was forever, but sometimes things don't work out as planned. We remain friends and wish each other the best." But Humphries sounds blindsided by the whole thing. In a counter-statement, he declared, "I love my wife and am devastated to learn she filed for divorce. I'm committed to this marriage and everything this covenant represents," he says in the statement, "and I'm willing to do whatever it takes to make it work."

Maybe there's a hint in the preview for the new season of "Kourtney and Kim Take New York," in which Kim, made-up within an inch of "Ru Paul's Drag Race," demands of her new husband, "How am going to have my career and live in Minnesota?" To which a sweat-shirted Kris replies, "Baby, by the time you have kids and they're in school, no one will care about you." Oh, Kris, I don't think we need to wait that long.

Just because the other 99 percent of the country is losing sleep over mortgage payments and student loans doesn't mean the fascination with excess goes away. Americans scrimped their pennies to go see fizzy, high society, screwball comedies during the Depression. The mid-'70s recession dovetailed neatly with the excesses of glam-rock and disco. And now, as our banks are nickel and diming us for using our debit cards to pay for our value meals, we still make blockbusters of multimillion-dollar movie extravaganzas and DVR the expensive follies of Housewives, Playmates and heavily shellacked pageant moms. And right there, at the crossroads of aspirational glamour and straight-up schadenfreude, are the big badonkadonked members of Bruce Jenner's extended family. Kim and Kris' two-part wedding was the most watched special in E! network history. We only have ourselves to blame, America.

But at this point, it seems Kim isn't the one who ought to be throwing in the towel. As PRI's Celeste Headlee pointed out on Twitter Tuesday morning, "The Kardashian wedding cost $10 mill, so $138,000 for every day of their now-defunct marriage." And, as a nightly entertainment show hilariously mused Monday night, this whole fiasco might just finally hurt the Kardashian "credibility." The credibility you were perhaps unaware existed until just now.

Ill-starred romances happen to the best of us, and not every love affair is meant to go the distance. Kim surely understands – she divorced producer Damon Thomas in 2004. And if you want to build a television brand around shopping or smiling at parties or whatever it is the Kardashians do, have at it. If you want to call it something other than reality, mazel tov. But the accelerated love story of Kim and Kris now looks even more like a cynical stunt by a Hollywood network and an attention-hungry family than it did back in May. And who knew that was possible?

Maybe other women can make a "not easy" decision about the rest of their lives in three and a half months. And others can get gown designers and caterers and magazines to throw around $10 million on a love that's evaporated before wedding guests gnawed through that six-foot cake. But why would the rest of us want to watch these people? The notion of fairy tales and romance, for anyone who bought into it in the first place, should be about as dead as Kris Humphries' chance of ever taking a shower with Kim Kardashian again. And for those who watch just to get their disgust at bourgeois excess on, that shark was jumped 10 million bucks and two Vera Wangs ago. All that's left now is a woman with a "career" whose professional highlight is getting married. Christ, even Paris Hilton didn't pull that stunt. Kim will no doubt keep the gifts. But one thing we can take back is our attention.