Sean Hannity will make Herman Cain the victim of a liberal smear, no matter what

Herman Cain kept changing his story Monday, but all the Fox News host could see was a nonsensical liberal plot 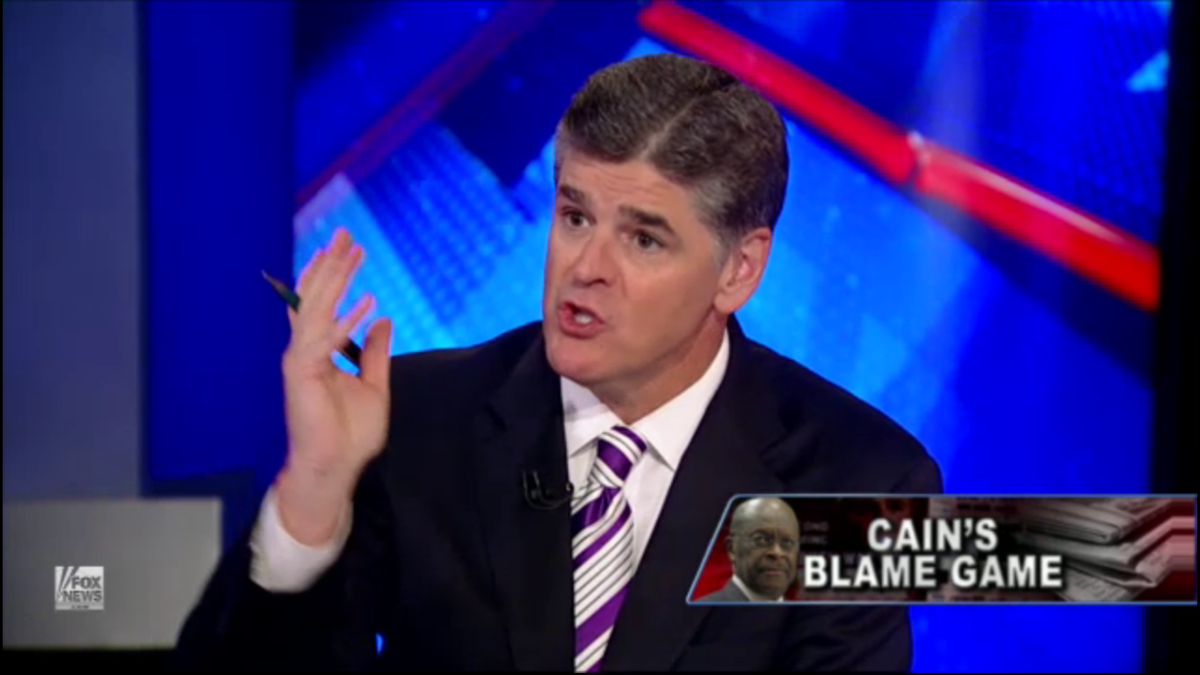 When Monday began, Herman Cain's campaign was playing victim over a Politico report that claimed he'd been the subject of sexual harassment complaints from two women while running the National Restaurant Association in the late 1990s and that the women both subsequently left their jobs after receiving cash payments and signing nondisclosure agreements. It was, his campaign had declared when the story broke, only the latest example of a "prominent conservative [being] targeted by liberals simply because they disagree with his politics."

But Cain's own behavior during the day damaged his efforts to paint the report as a politically motivated smear, mainly because -- after contradicting himself and changing his own account several times -- he ended up confirming the essence of what Politico reported. We now know that Cain was, indeed, the subject of complaints and that at least one case involved a cash settlement. This doesn't necessarily mean that Cain harassed his employees and we still only have a vague idea of how much money the settlement was worth, but Monday was not a good day for Cain's credibility or for his effort to win respect as a legitimate top-tier candidate -- a reality that even many conservative pundits were willing to recognize.

But not Sean Hannity, who devoted two segments on his Fox News show Monday night to portraying the entire episode as the product of a "left-wing media" that wants to destroy Cain because he "represents a real threat to a liberal narrative that suggests conservatives are racist." Hannity's show attracts approximately 2 millions viewers a night, and here's a quick summary of the Cain coverage they were treated to on Monday:

Segment I: It's the opening segment of the show, and Hannity begins it by telling viewers that Cain had previously predicted he'd be subject to the same "high-tech lynching" that Clarence Thomas faced in 1991. "Over the weekend," Hannity declares, "the left-wing media made Cain's prophecy come true." Hannity then plays a clip of Cain's early afternoon remarks at the National Press Club, where he insisted that he was "unaware" of any settlement with any women (he later admitted that there was a settlement), and then introduces a clip of Politico's Jonathan Martin talking about the story by announcing that "Politico's attempt to smear the Republican front-runner is coming under fire."

Hannity brings in guest Dick Morris, who quickly brands the episode "low even by political standards." Only then, by way of promoting an interview with Cain that will air on Greta van Susteren's Fox show later, does Hannity acknowledge that Cain changed his story about the settlement. This, Hannity assures viewers, is no big deal: "He says that he was aware of a settlement -- he was thinking, 'Did I remember? Did I not remember?' Apparently, he said he was.'" Morris reminds viewers that "Politico is a Democratic organ -- a spinoff of the Washington Post." Then it's time to promote Morris' new children's book!

Segment II: Hannity begins with this: "As we reported, Politico.com is claiming that at least two women accused Cain of inappropriate behavior way back in the early 1990s. However, the article conveniently leaves out key details. But that’s not surprising, considering the left-wing media has a lengthy track record of breathlessly trying to take down Republican presidential candidates while shamelessly protecting their friends.” He notes that the mainstream press wouldn't touch the John Edwards scandal until months after the National Enquirer reported it.

Then he brings in Ann Coulter and ... is it really necessary to recount this? Suffice it to say that Coulter asserts that "this is the second time a conservative black has had outrageous and what appear to be false allegations of sexual nature leveled against him by the left -- Clarence Thomas, of course," and declares that "our blacks are so much better than their blacks." The segment runs eight minutes and there is not a single mention of the fact that Cain repeatedly changed his story on Monday. If you're curious, here's the video -- Fox has yet to post the first segment:

A few things stand out in these segments. One is Hannity's relentless characterization of Politico as a liberal media outlet. The reality is that Politico has faced considerable scrutiny from the left for its symbiotic relationship with Matt Drudge's right-wing news site and for the ties of its ownership to the Republican elite. For instance, Politico's CEO, Frederick Ryan, is a Reagan White House veteran who serves as chairman of the Reagan Presidential Foundation's board. And the Politico reporter who was featured in one of the clips Hannity ran, Jonathan Martin, previously wrote for the National Review, hardly a bastion of left-wing thought. Politico's original reporting did raise some legitimate questions, but none of them had to do with any supposed partisan motive.

More striking, though, is Hannity's refusal to grapple with a very basic question: Why would the "liberal media" be so intent on taking out Cain when his nomination would actually be the best thing that could happen to Democrats' hopes of retaining the White House next year? Even Republicans seem to understand that Cain would be a general election disaster; it's why he's still racked up no high-profile endorsements from party leaders, even though he's near the top in polls and the first primary season contests are two months away. If anyone has an obvious incentive to cut Cain down to size, they're on the GOP side. This is why Mike Huckabee, Hannity's fellow Fox News host, said on Monday that he'd "almost guarantee" the story was given to Politico by a Republican.

None of this came up on "Hannity," though, and instead viewers were told a familiar, comfortable tale about the big, bad liberal media and its contempt for conservatives, especially those with dark skin. In a way, there's nothing surprising about this. As Bill O'Reilly, of all people, pointed out a few months ago, Hannity's is "a Republican show" -- one that stands out even on Fox for its eagerness to cheer for all Republicans not named Ron Paul and to condemn every Democrat not named Zell Miller. It's also tempting to paint a scenario in which Hannity's efforts blow up in his face -- that, say, millions of conservatives now rally to Cain and propel him to the nomination, setting the stage for an Obama landslide next fall. But then, that outcome would be just be the ultimate demonstration of the media's commitment to destroying black conservatives, wouldn't it?